15 of the most iconic fashion runway shows of all time 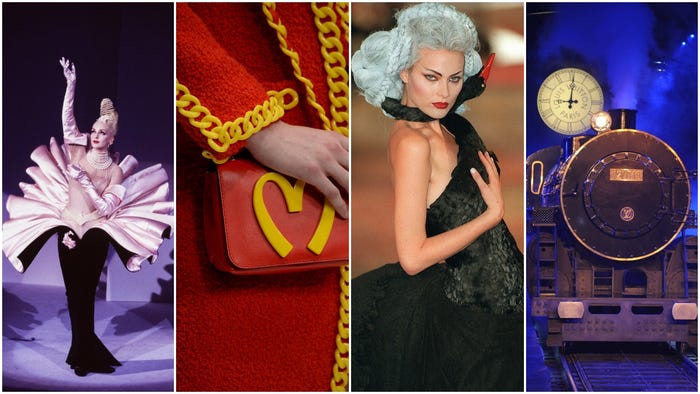 Twice a year, fashion's royalty descend on various cities to witness the latest offerings from designers. New York's Bryant Park, London's Somerset House, Paris' Grand Palais, and Milan's Piazza Duomo all set the stage for Fashion Week, held in each of the fashion capitals in February and March, and again in September and October.

In recent years, designers have been thinking of new ways to present collections. In the past, shows have included elaborate sets, celebrities, and shocking designs to wow its audiences.

Fashion shows are the highlight of any style calendar and with its ever-changing landscape, it's always inspiring to look back on the ways that designers have presented their collections.

From Chanel's intricate settings to Moschino's odes to pop culture, Insider has rounded up some of fashion's most incredible runway shows over the years.

Thierry Mugler gave us Haute Couture to the extreme for his 1995 Fall show. It was an hour-long extravaganza filled to the brim with celebrities, and the first time we saw "robot fashion" hit the runway. 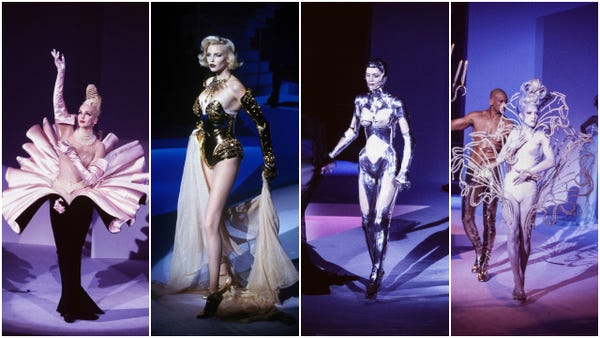 Beyoncé fans will recognize the gold robot corset and arm cuffs which appear in her 2009 music video for "Sweet Dreams."

More recently, Cardi B wore two looks from the show for the Grammy Awards 2019: The pearl outfit for the red carpet, and the feather outfit for her performance of "Money."

That's what you call staying power.

Fashion's "Enfant Terrible," the late Alexander McQueen presented a show for Givenchy's 1997 fall collection that was typically '90s, with supermodels and eye-catching motifs. It was also one of the last times Princess Diana would attend a fashion show. 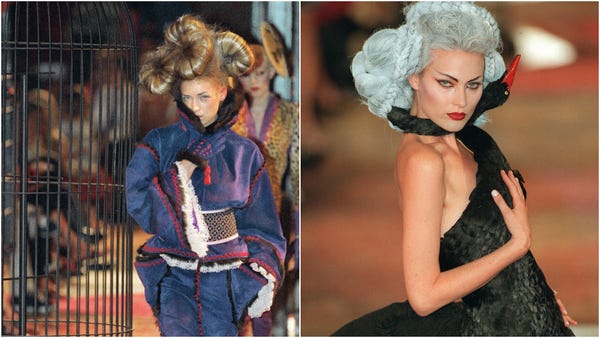 McQueen and fellow designer Rebecca Barton once crashed a Givenchy show while at school and reportedly said it was "a load of crap."

In 1996, McQueen became Givenchy's creative director, making it his first, and only, appointment as the head of another fashion house. It was famously reported that McQueen told French newspaper Le Figaro that he "had no respect" for its founder, Hubert de Givenchy.

This was also McQueen's first grapple with the world of Haute Couture, bringing the drama and macabre that he had become well known for and putting in a different setting. The show for his 1997 Fall/Winter collection was his second after the appointment.

Only a few months after John Galliano's appointment at Givenchy, he presented his spring 1998 show at Paris' Opera Garnier. The lavish runway was set on its marble steps, with looks that were worthy of an extravagant ball. 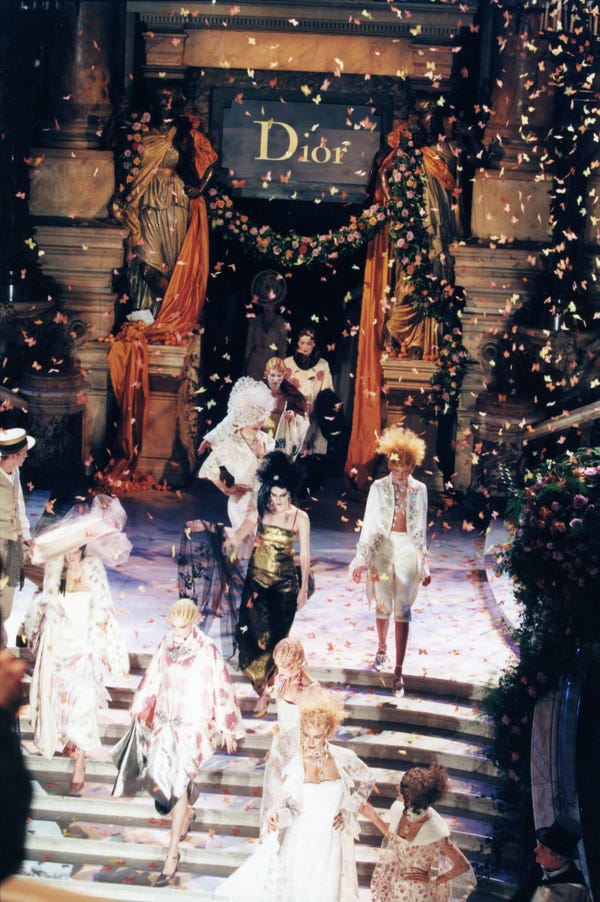 There were outfits that were straight from the early 20th century, as well as a nod to the baroque era.

Alexander McQueen's 2001 "VOSS" collection is probably one of his most iconic runway shows. A glass box in the center of the room was revealed to contain British writer Michelle Olley naked, on a chaise lounge wearing a gas mask hooked up to various pipes, while moths fluttered around her. 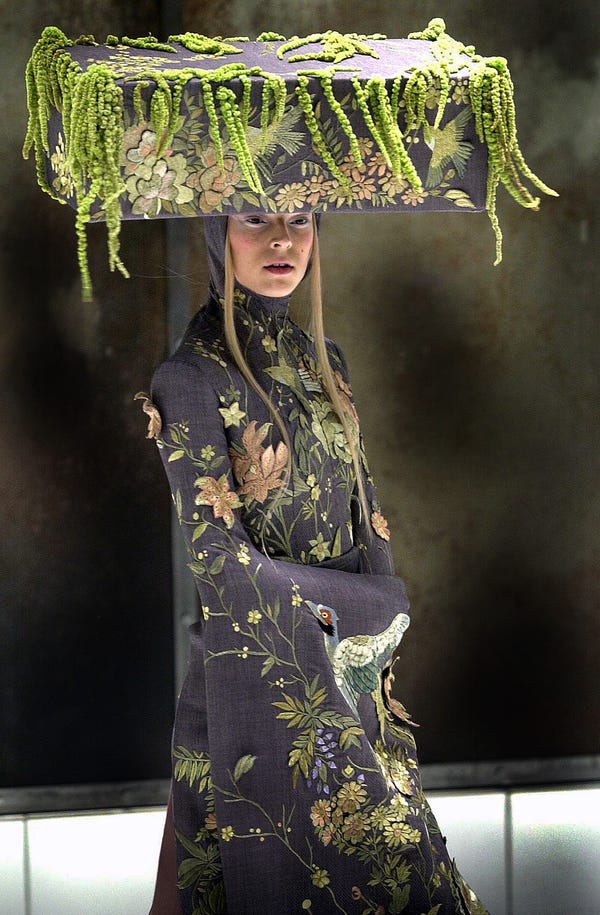 The scene was based on American photographer Joel Peter Wilkin's image called "Sanitarium."

The show itself has been noted as one of McQueen's most memorable shows. Vogue described it as "nothing short of monumental."

Marc Jacobs placed a working steam train in the middle of the runway and had models escorted off it during the Louis Vuitton ready-to-wear Fall/Winter 2012. 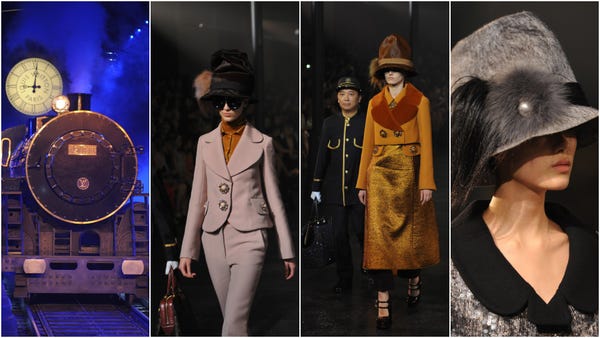 Marc Jacobs' appointment as Artistic Director of Louis Vuitton Womenswear in 1997 was a big moment for fashion.

Often described as a "genius," Jacobs' runway shows propelled the luxury brand to a new way of presenting collections. Under his direction, LV's runways became fashion playgrounds and included everything from escalators, elevators, fountains, and carousels.

Chinese designer Guo Pei's 2013 collection was filled with outfits that looked stunning albeit heavy. Models also wore platform shoes, which were so high that many had to be escorted down the runway. 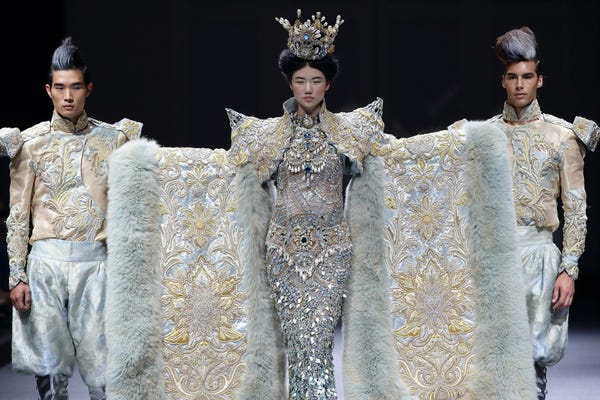 Pei is known throughout China and has worked as a costume designer since the early 2000s.

In 2015, she rose to fame in the western world when Rihanna wore a piece by the designer to the 2015 New York Met Gala, "China: Through the Looking Glass."

The canary yellow floor-length dress, with silver detail and yellow fur, took around 55,000 hours over two years to complete and weighed around 55lbs.

Moschino's Fall/Winter 2014 ready-to-wear runway show was an ode to pop culture, fast food, hip-hop, and Moschino shows of the past. 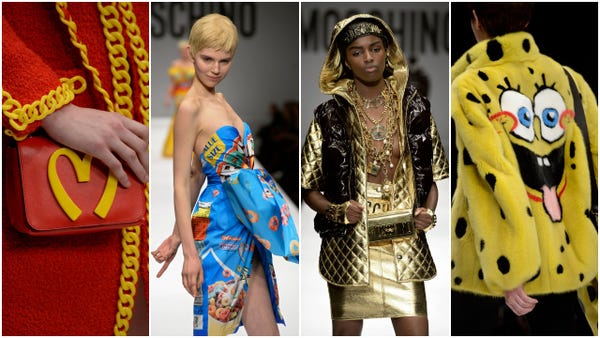 2018 marked the 20th anniversary of Versace founder Gianni Versace's death, so his sister, Donatella, presented a runway show dedicated to "a genius . . . an icon . . . my brother." 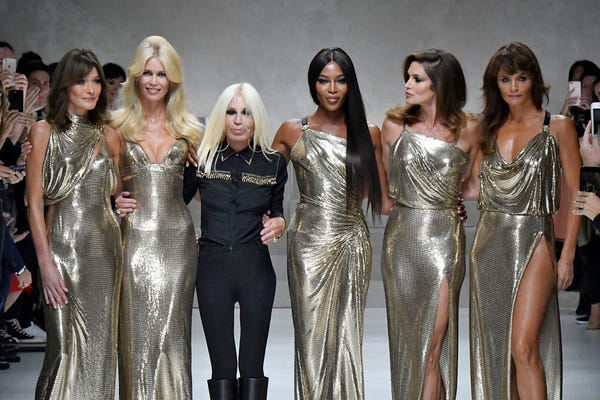 The show was an ode to Gianni Versace's distinct style and appreciation of the feminine form, bringing together some of fashion's favorite supermodels.

All five of them then walked the runway, each in their distinct style, alongside Donatella.

Designer Christopher Bailey marked the end of 17 years at Burberry in a show called "Time," which he described as "the past, present, and future" of the brand. 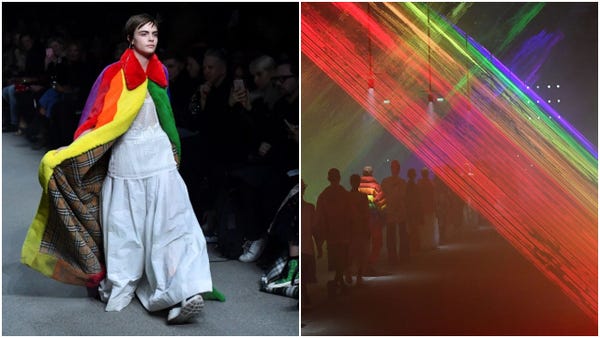 Models wore various interpretations of the rainbow flag, with the finale including models walking through rainbow-colored lasers. It was a celebration of LGBTQ+ people everywhere.

The show was also heavily inspired by British streetwear of the 1980s and 1990s. Models wore shell suit jackets, sweatshirts, and parka jackets. Of course, no Burberry show would be complete without its signature plaid — and there was lots of it.

Chanel turned its summer 2019 runway into a beach. There was sand, water, and lifeguards. It was a fun show that brought back the brand's original ethos of functionality and comfortably chic fashion. 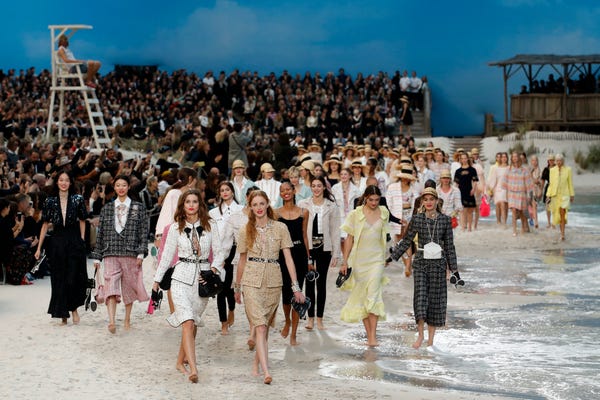 The Grand Palais has had many dramatic transformations when hosting Chanel's runway shows throughout the years.

It's taken the form of a supermarket, a rainforest complete with waterfall, and a forest to name just a few. Lagerfeld's creativity when it came to runway shows knew no limits.

Paris Hilton as Cruella de Vil, and beauty influencer Patrick Starrr as Ursula — NYC luxury brand The Blonds gave a runway show that was a celebration of all things Disney Villains using a diverse cast of models and modern-day queer icons. 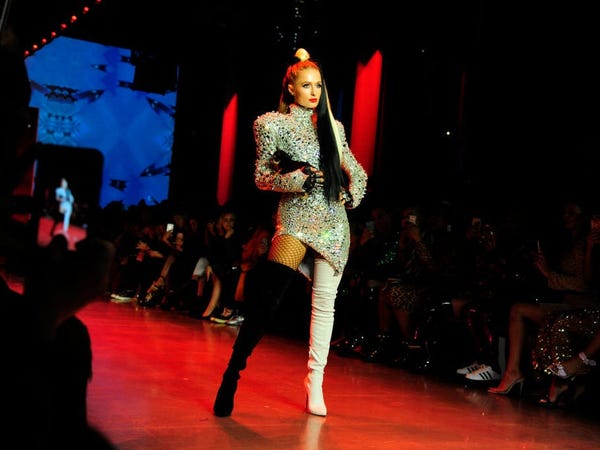 The Blonds is known for its handmade glamourous designs that are inspired by pop culture, music, film, and art.

The Spring/Summer 2019 collection was a nod to Disney villains, with intricately embroidered outfits inspired by Snowhite's Evil Queen, Aladdin's Jaffar, The Little Mermaid's Ursula, and more.

A bittersweet moment, Chanel's Fall 2019 runway show was a farewell to Karl Lagerfeld. As the soundtrack began, Lagerfeld's voice could be heard speaking in French, finishing with the words, "it's like walking in a painting." 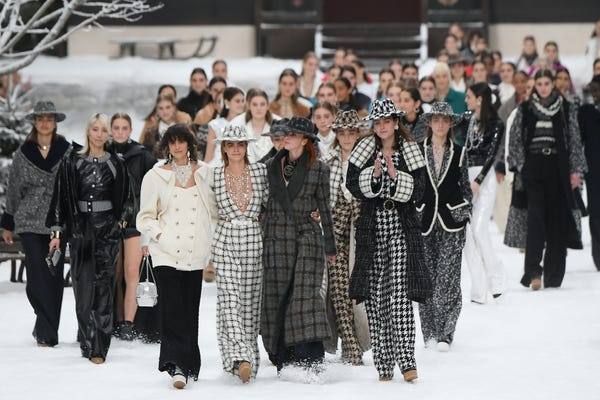 The Grand Palais in Paris — the venue of choice for Chanel's runway shows — was transformed into a snow-covered wonderland where models stood on the steps of a chalet.

As the music began, Lagerfeld's last generation of models, including Cara Delevingne, began to walk carefully down the steps, along the wintery runway in outfits that echoed the brand's iconic silhouette and woven houndstooth.

Towards the end of the show, some models could be seen in tears. It was a sad but beautiful ode to the "Kaiser" of fashion.

Valentino showed us that representation is everything in its Spring 2019 show, where Creative Director Pierpaolo Piccioli wanted to bring Black women to the forefront. 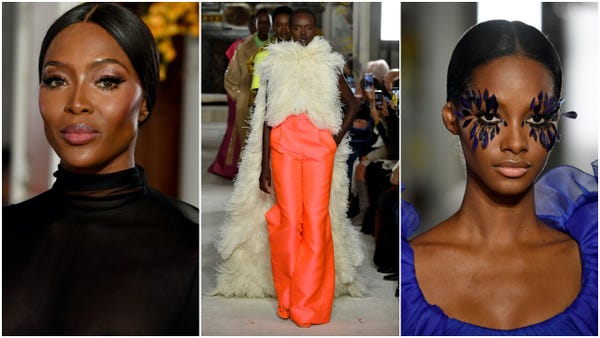 Piccioli shrouded models including Naomi Campbell in a gorgeous array of colors on the runway, and brought Céline Dion and many others to tears. Campbell herself described the moment as "an emotional return" in a vlog posted to her YouTube channel.

In a press conference, a day before the show Piccioli said: "I wanted to put Black women in the center."

Pyer Moss's Spring 2020 show was a celebration of unadulterated Blackness on a runway in an iconic corner of Brooklyn steeped in Black-American history. 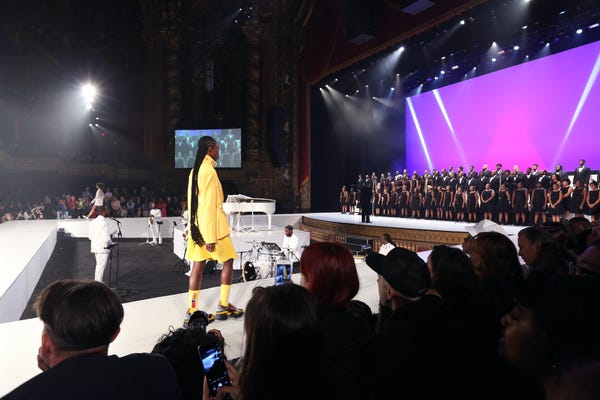 The collection titled "Sister" was inspired by Sister Rosetta Tharpe, who is widely considered to be the Godmother of rock and roll, although her legacy has been hugely overlooked.

Writer Casey Gerald opened up the show with a sermon that highlighted the legacy of slavery and the survival of African-Americans and included the words: "I've come here to say you can't hurt us no more."

The Jean-Paul Gaultier show was a celebration of modern French fashion, diversity, sex, and pop culture with over 200 looks, performances, and celebrities. 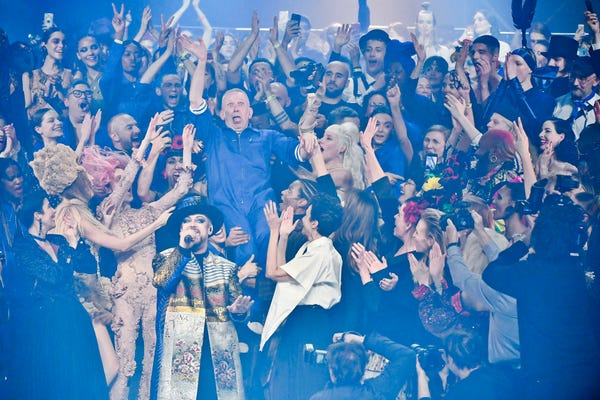 One of fashion's most fun designers presented his final collection earlier this year after a career spanning over 50 years.

Jean-Paul Gaultier has been setting runways alight since his debut in 1976 and is often credited for his super-inclusive runway shows. Gaultier was known to present people of different gender expressions, races, and sizes — a testament to his vision of everyday people that heavily inspired his work.