IF you ever feel rushed when going through the checkouts at Aldi, you're not alone as the German supermarket chain is known for it's super speedy checkout process.

But one woman has slammed the supermarket giant after an Aldi cashier tried to enforce a checkout rule during her recent shopping trip. 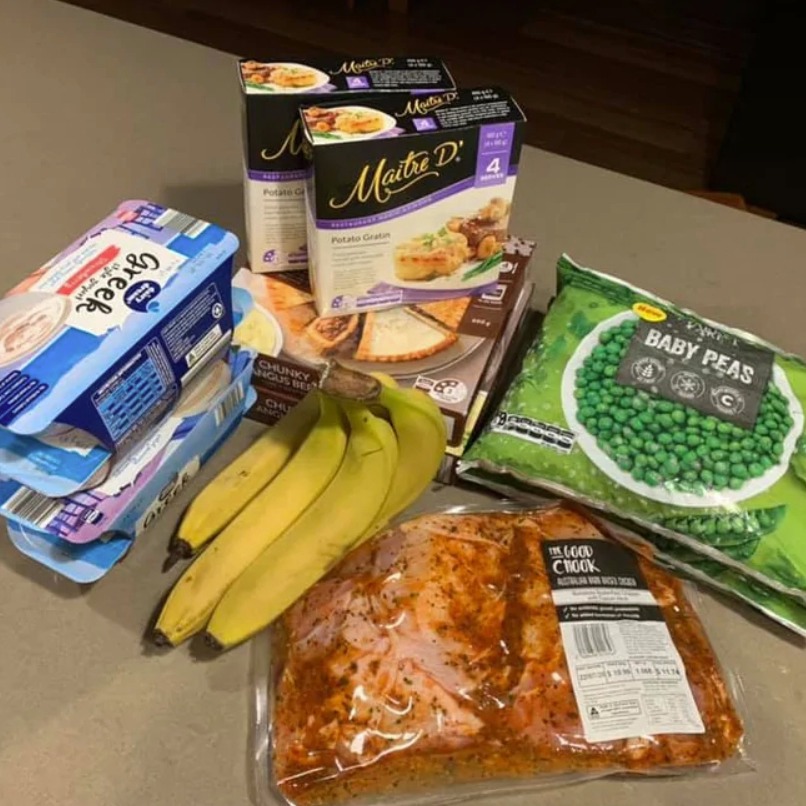 After grabbing a handful of items from the shelves, the woman headed to the checkout with a bag in hand.

But as she loaded the items into her bag, she claims the cashier insisted she "bring a trolley next time" – despite only having a couple of items.

Taking to the popular Facebook group Aldi Mums, the Aussie mum explained how the situation had left her "really annoyed".

Along with a snap of the few items she purchased, she wrote: "When the cashier starts scanning them through and I place them into a bag, he said to me ‘next time you come into the store bring a trolley to load your groceries into’." 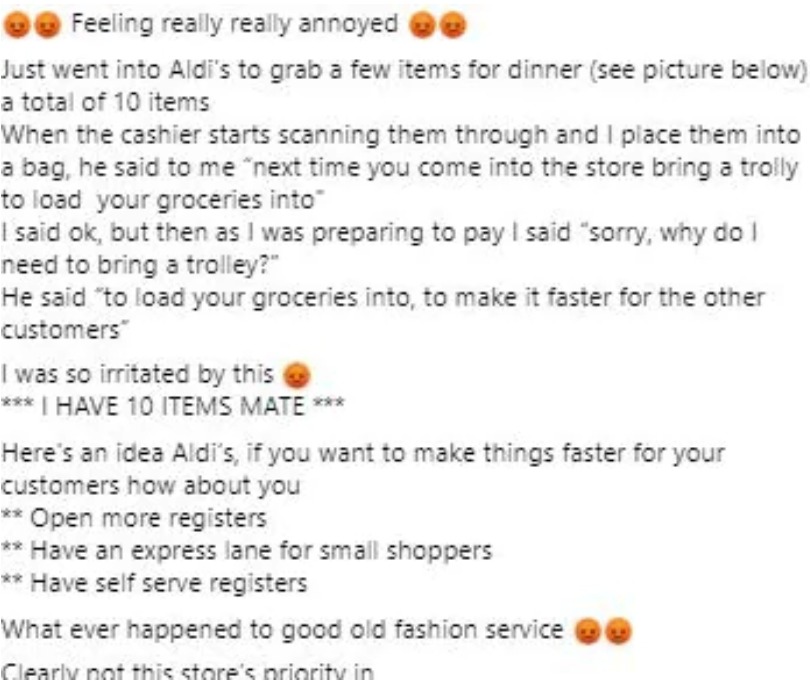 She continued: “I said ‘OK’, but then as I was preparing to pay I said ‘sorry, why do I need to bring a trolley?’

“He said ‘to load your groceries into, to make it faster for the other customers’

The woman added that she was "so irritated by this" and emphasised that she "had 10 items" so didn't see the need for a trolley.

But it seems she wasn't the only one left baffled by the supermarket "rule" as the post has since racked up over 2k likes and hundreds of comments for other Aldi shoppers who weighed in on the discussion.

“For only a few items like this I’d definitely only have a bag/my own basket as well, " one woman responded. "Very silly to get a giant deep trolley for only a bags worth.” 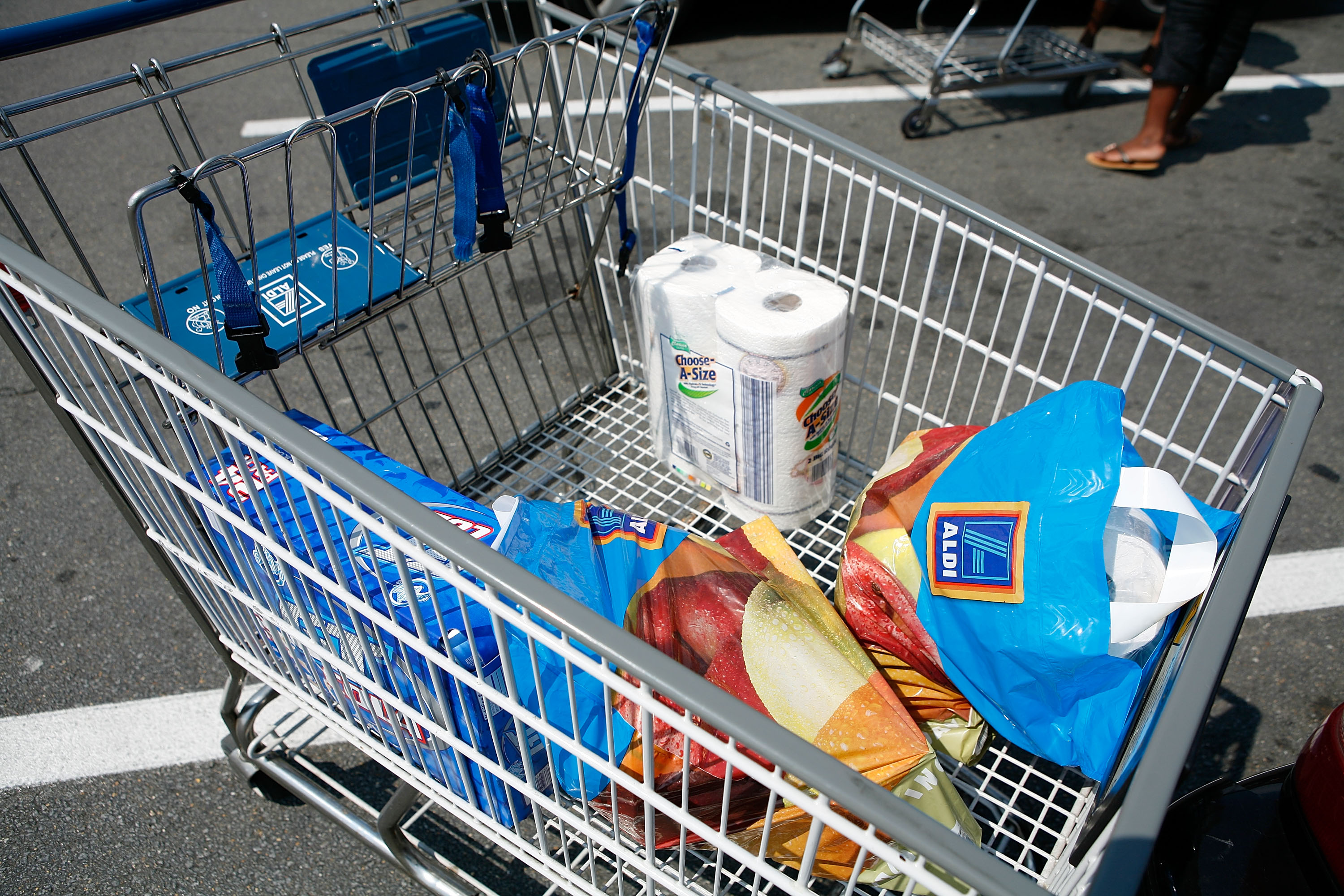 And another added: “That’s ridiculous with how many items you had! Fair enough if you were trying to load a whole belt full into bags but that shop is tiny!!!!”

“I went in for three items once. And the lady said the same to me and I laughed at her,” a third shared.

Meanwhile, a fourth wrote: “I agree with you. If you want to load a small number of items into a bag that’s fine. Faster for other customers … that is their problem, (Aldis) NOT yours. Stick to your guns (bag)”

But not everyone had the same view as some agreed that it is in fact quicker just to throw everything into a trolley.

One shopper said: “I grab a trolley every time. Regardless of how many or how few items I’m getting. Straight into the trolley and out to the car to pack. Don’t pack at the register. ”

And even a former Aldi employee chimed in and said: “Aldi staff are told to encourage customers to use trolleys to save time at the registers. The poor guy was just doing as he is told."

Speaking to news.com.au. an Aldi Australia spokesperson said that while using a trolley to shop at their stores isn’t a policy, they “recommend” customers use one when purchasing “multiple products as it saves time at the register”.

We also shared how a bloke claims you’ve been straining pasta all wrong – but not everyone agrees.

And this bloke showed the easy way to peel an onion in seconds – and you’ve definitely been doing it wrong.

Plus this savvy shopper bagged £30 worth of food for just £3 with this supermarket trick.