Home » Beauty and Fashion » Gucci Is Staying in Trump Tower

Gucci Is Staying in Trump Tower

The day President Biden and Vice President Kamala Harris were inaugurated in Washington, D.C., Melania and Donald Trump stepped off Air Force One in South Florida, bound for the confines of the Mar-a-Lago Club in Palm Beach.

He wore a typically boxy suit of indeterminate origin. She wore an orange and blue, boldly patterned $3,700 Gucci caftan that came with as much symbolism as the famous “I really don’t care, do u” jacket she put on back in 2018 on a trip to visit children at a border detention center in Texas.

With its relaxed lines and orange hexagons recalling a David Hicks carpet, the new dress telegraphed the idea that Mrs. Trump was entering into a new role as a person of leisure, seemingly without a care. It also was a worldwide advertisement, unwitting or not, for a brand that has substantial ties to the Trump business.

For the past 14 years, Gucci has leased 48,667 feet at the base of Trump Tower in Midtown Manhattan, making it the building’s biggest commercial tenant. 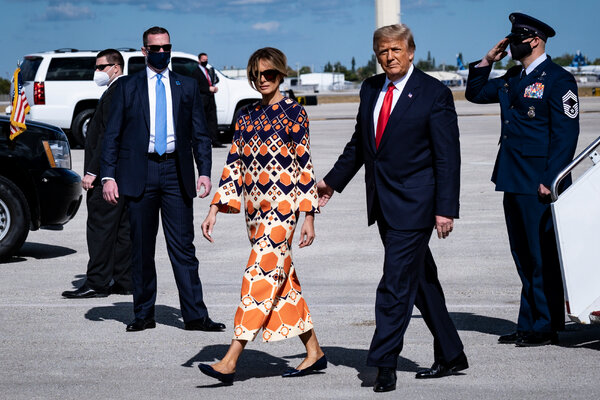 Other companies that leased space with the Trumps have downsized their spaces or not renewed their leases. One is Nike, which in 2018 shut down its Niketown location at 6 East 57th Street — a building around the corner from Trump Tower that the Trump Organization has a 100-year ground lease on — and opened a new flagship, the so-called House of Innovation, five blocks south. (A spokeswoman for Nike then declined to address to Forbes whether the move was political.)

In 2019, the Industrial and Commercial Bank of China decreased its presence in Trump Tower. Tiffany, which temporarily took over the Niketown space in 2018 while its flagship was being renovated, is not renewing its lease next year, Bloomberg recently reported.

But in 2020, Gucci renegotiated and extended its lease, according to two people with knowledge of the deal, both of whom requested their names not be used because they are not authorized to speak about it.

The luxury company received a reduction in rent in exchange for agreeing to extend its lease beyond 2026. Trump Tower got to keep a highly desirable tenant: a brand that has boomed since the designer Alessandro Michele took over creative direction in 2015, whose presence in the building helps counter the idea that its namesake is nothing more than a “poor person’s idea of a rich person,” in the words of Fran Lebowitz.

The players involved, however, are not talking about it publicly.

Four days after receiving a detailed list of questions about the deal, a representative for Gucci called to say that a statement was on its way within the hour. A little more than an hour later, the representative called back to say the statement would not actually be arriving after all.

The Trump Organization did not respond to two requests for comment.

One possible reason: According to the person who has seen the new lease, Gucci required people at the Trump Organization to sign confidentiality agreements regarding its terms.

Still, the deal was worth it to the Trumps for reasons that extend beyond symbolism.

Numerous luxury brands occupying prime Manhattan retail spaces have renegotiated leases during the coronavirus pandemic as foot traffic dropped off. Others have simply subleased their spaces. That was what Ralph Lauren did at its Fifth Avenue location last November, renting 28,300 square feet to the fast fashion retailer Mango for what the Real Deal reported was $5 million — which is $22 million less than Ralph Lauren pays for it.

In recent years, revenue from “The Apprentice,” Mr. Trump’s former reality show on NBC, dried up. Debt payments across the Trump business are coming due. That has turned the retail space in and around Trump Tower into a lifeline, becoming what Susanne Craig and Russ Buettner wrote in The New York Times last January is likely his empire’s most dependable and “greatest long-term money producer.”

A filing with the Securities and Exchange Commission in 2012 related to the Trump Organization’s finances described Gucci as taking a 20-year lease back in 2006. Gucci paid $384.40 per square foot each month in rent. This amounts to an annual base rate of $18.7 million and accounts for about two-thirds of the total $29.53 million the Trump Organization earns annually from its commercial tenants there, according to the filing.

Gucci’s discretion notwithstanding, it’s far from clear that news of the renegotiation might affect sales. The fashion industry tends to be politically liberal, but sometimes business is just business and aesthetics outweigh politics.

Oscar de la Renta bounced between first ladies with diametrically opposed worldviews. James Galanos pledged his allegiance to Nancy Reagan despite the catastrophic neglect of AIDS by her husband’s administration. In 2019, Bernard Arnault, whose company LVMH owns Tiffany, was joined by Mr. Trump at a Louis Vuitton factory in Texas and posed with him for photographs.

But Mr. Trump’s divisive behavior, especially since the pandemic began and the election, has bolstered the resolve of activists denouncing him. Brands are more sensitive than ever to the threat of boycotts. Companies including Nike and Twitter have aligned themselves with the Black Lives Matter movement.

The latest incarnation of Gucci was more racially inclusive than most high-end fashion brands.

Shortly after Mr. Michele became its lead designer and began doing away with an haute and self-consciously snobby aesthetic for an ironic, referential style that could perhaps be described as Etsy Luxe, the company did an ad campaign with all Black models.

But it has also misstepped.

In 2017, it was called out for releasing a jacket that looked remarkably like one designed decades before by Dapper Dan, a.k.a. Daniel Day, a Black couturier in Harlem. In response, the brand reached out to him, placing him in an ad for its men’s tailoring and collaborating with him on a luxury boutique.

Soon after, it announced an initiative called Gucci Equilibrium, intended in part to improve diversity and inclusion in the company.

But in 2019, Gucci pulled an $890 sweater criticized for evoking blackface from the market. And its leadership team, along with that of its parent company, Kering, remains dominated by white men (Kering does have one Black board member).

Although the decision by Gucci executives to renew the lease at 725 Fifth Avenue came before protesters with confederate flags stormed the Capitol back in January, Mr. Trump’s associations with white supremacists was hardly unknown in 2020, said Kailee Scales. Ms. Scales is the former managing director of the Black Lives Matter Global Network and a principal at ThnkFree Global Strategies, a boutique company that guides brands such as Amazon and Sprite on marketing strategies involving social justice issues.

“This is a time,” she said, “where brands, organizations and individuals around the world are reckoning with racial equity and working to address and dismantle the systems that led us to witness one of the most horrifying moments in history — the murder of George Floyd.”

Consequently, she said, it was “an odd choice” for Gucci to continue to intrinsically link itself to a man who has “blatantly refused to disavow white supremacy” and “built political equity by promoting racist birther conspiracy theories.”

Ms. Scales’s opinion was shared by Shannon Coulter, who started the “Grab Your Wallet” campaign, which organized boycotts against SoulCycle and New Balance after people with ownership stakes at those companies donated substantial sums of money to Mr. Trump’s campaigns.

In an interview, Ms. Coulter said that she had intentionally left Gucci and Nike off the boycott list. “We were pretty generous because we knew they had signed leases before his campaign,” she said.

The decision by Gucci to renew in 2020 was something altogether different.

“It’s disgusting,” she said. “They are essentially doing business with a white supremacist. That’s what that decision means.”

Still, few people directly involved with the fashion world seem eager to address the possible controversy. Editors such as Samira Nasr of Harper’s Bazaar, Nina Garcia of Elle and Anna Wintour of Vogue have positioned themselves as stewards of racial justice. But they also rely on Gucci for advertising. Representatives for them all declined to comment. Mr. Day did not respond to a request for comment.

Jeremy O. Harris, the author of “Slave Play,” has had a contractual relationship with the house since November 2020. In general, such arrangements involve wearing a brand’s clothes at public appearances and getting to keep them afterward. “I take a lot of pride in my relationship with them, having met the people and seen how they really listen and are trying to change,” he said in an interview last Friday. And “while there are few real estate moguls who have risen to the level of semi-fascist leader like Trump, from what I do know, they are pretty much all deeply compromised people.”

Luckily, he added, “I really only go to the Wooster Street store.”