WHEN Rosie Cawthera's parents gave her £1,000 as a 21st birthday present, they were expecting her to use it for a house deposit.

But mum Jean was horrified when her daughter used the money for a boob job, which she'd already begged her not to get. 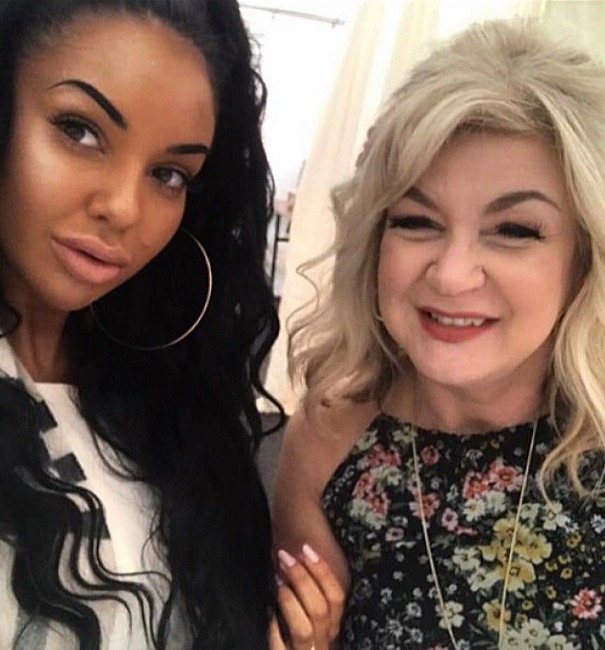 Six years later, the dental nurse, from Leeds, has had so much work done her mum thinks she's "ruined" her looks and barely recognises her own daughter – who spends £1,100 a year on Botox and fillers.

Rosie's also so addicted to sunbeds – she has one in her house which she uses for half an hour each day – that a police officer once mistook her for another race.

Speaking exclusively to Fabulous, both mum and daughter tell their story…

Rosie Cawthera, 27, a dental nurse, lives with her partner in Leeds. She says: 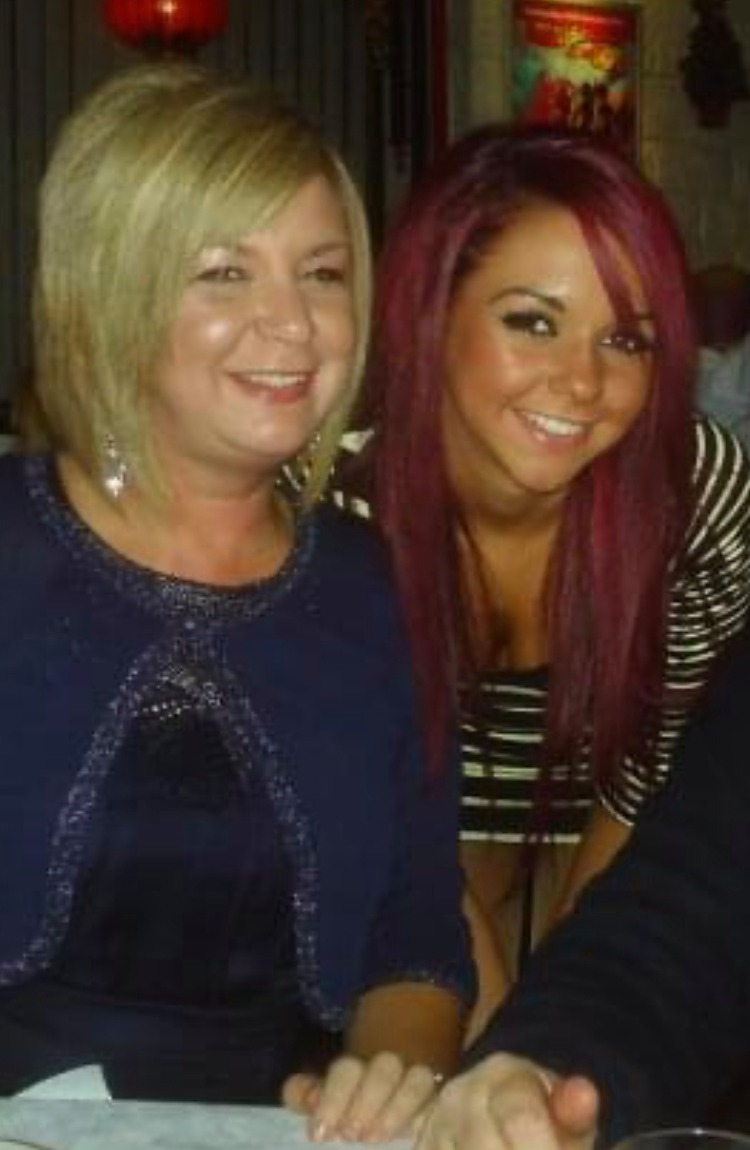 ‘When I used to live with my parents, I’d sneak through the door after having some filler and mum would say: "What have you had done?!"

I’d try to cover up my lips with my hand but she’d make me show her. Every time, she'd look horrified by my ever-growing pout. "You look like a fish!" she’d say.

But I didn’t care, and I still don't. I’m addicted to having cosmetic procedures. It makes me feel sexier and more attractive.

I spend £1,100 a year on Botox and fillers in my lips, chin, jaw and cheeks – many of which Mum doesn’t even know about.

I love that feeling when I can’t move my face. I save up for them in a special account, putting a little bit away each month. I’m really good with money and have never been in debt.

I’m addicted to having cosmetic procedures, I love that feeling when I can't move my face

The first surgery I had was on my boobs when I was 21.

It was supposed to be for a house deposit, but I put mine towards the op – which cost £5,000 in total.

I went from a AA to a DD and immediately felt more confident. But they're still not big enough – I want to go to a FF when I can afford it. I've been quoted £5,800 for the op. 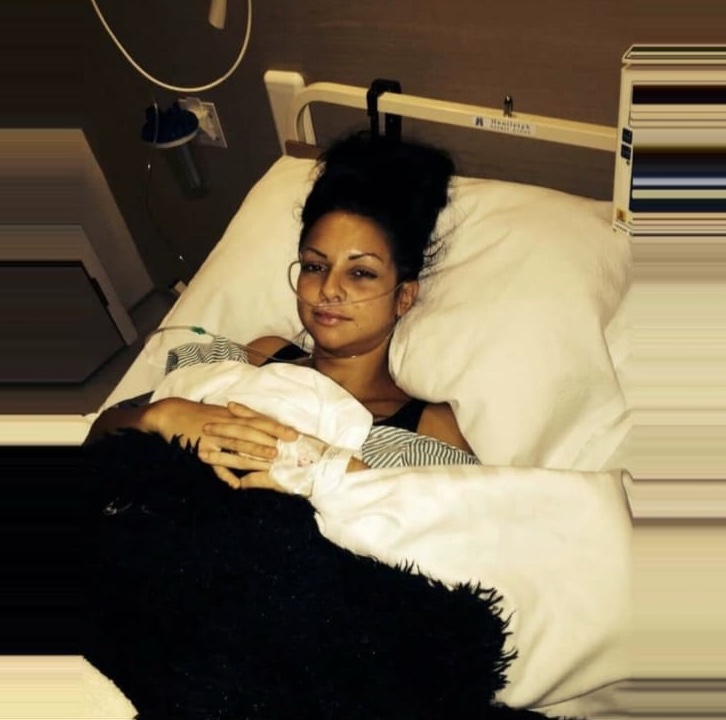 After that I had my lips done, now I have 1ml of filler injected every three months – although the clinics often refuse to treat me because my lips are already so big.

I have Botox on my frown lines, forehead, above my eyebrows and crow’s feet. I love how it makes me look.

A couple of years ago, I started getting fillers in my jaw, chin and cheeks. It costs around £400 for a ‘Kylie Jenner’ package – which I have twice a year.

I love how contoured fillers make my face and I feel more confident without make-up now.

I’m so dark skinned that once, when our car was stopped for a speeding offence, the police mistook me for a black woman

I’ve clashed so many times with my mum over my obsession but I refuse to stop going.

When I lived at home, I’d always be skint and would ask her for money for my car insurance – which I'd then spend on fillers. She fell for it every time!

Mum is always saying that I don’t need more and she hates how much tanning I do.

I rent a sunbed for £60 a month and go under it for half an hour every day.

I’m so dark skinned that once, when our car was stopped for a speeding offence, the police mistook me for a black woman. I didn't even realise until I saw the report, where they described my race.

I don’t care about getting older or the damage the sunbeds might be doing to my skin, I’ll just have more Botox to hide my wrinkles. 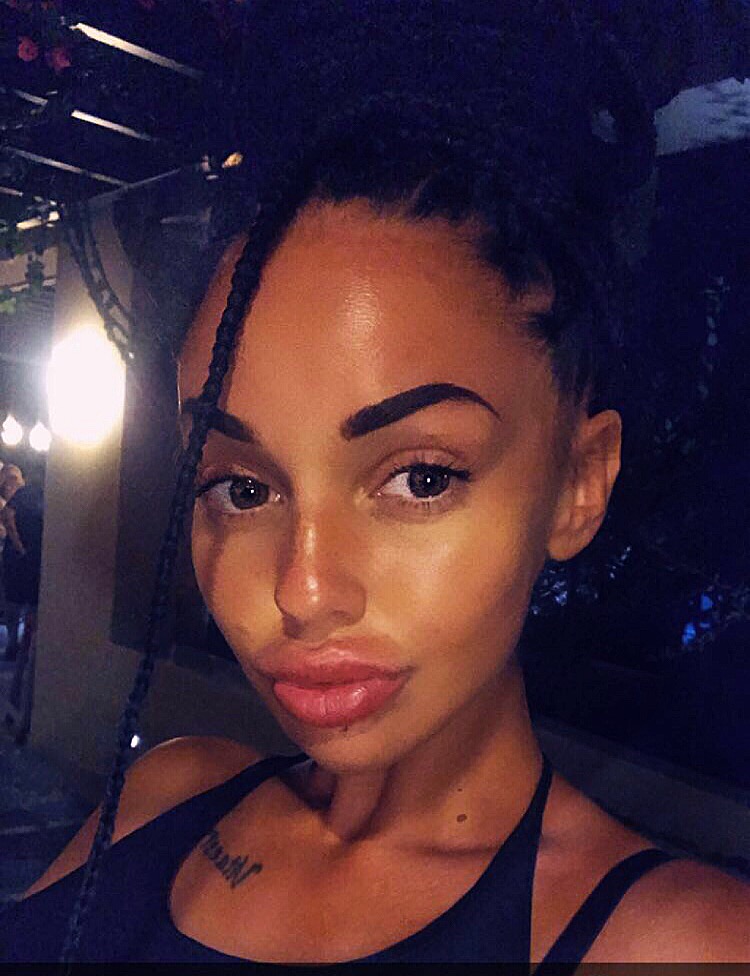 I’ve had no procedures during lockdown and it’s been torture. My Botox is wearing off and though no-one else noticed, I can.

I’m counting down the days until I can get my procedures done again and I’ve already booked myself in for my Botox in the first week of July, as my salon has just announced it's re-opening.

But my tan is probably the best it’s ever been – thanks to extra hours in the sunbed and in the garden while I'm off work.

My boyfriend doesn’t care about my obsession – he knows it makes me happy.

I don’t know why I’m like this. I've often thought that I might suffer from some kind of body dysmorphia.

I don’t get any mean comments about my looks now, although some friends say I should cut back on the fillers.

Sometimes men stare, but I'm taken so I'm not interested, and I've never overheard any rude comments from strangers.

Now my goal is to have a butt lift. I’m so small at only 5ft 2ins and a size six but it’s expensive at around £6,000 and really quite dangerous.

I know mum doesn’t want me to have it – of course – but it hasn’t put me off!

Jean Cawthera, 54 is a dental nurse. Married to Michael, 58, a colour technician, the couple live in Apperley Bridge, West Yorkshire. They have two daughters, Katie, 29 and Rosie, 27. Jean says: 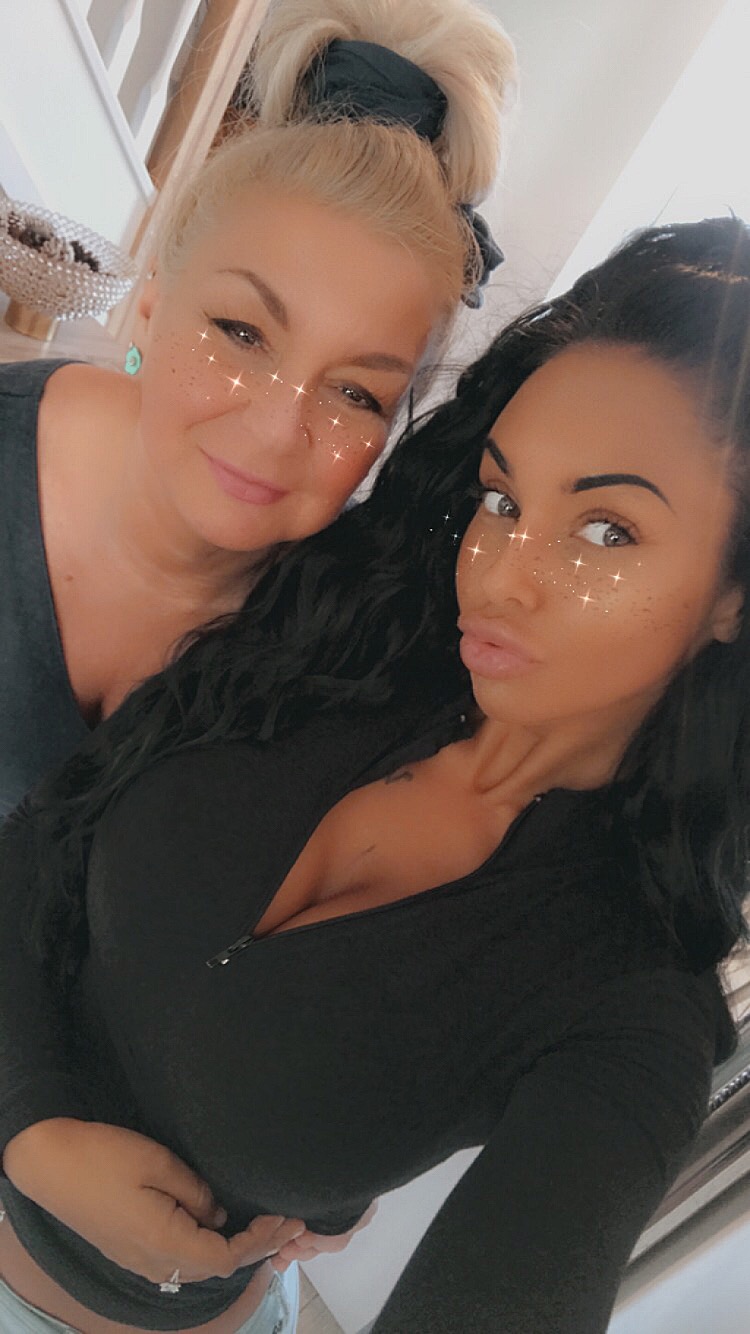 ‘When my youngest daughter Rosie comes to our house for dinner, I’ll look at her across the table and snap: "Close your mouth while you’re eating!"

But she can’t. Her lips are so ridiculously big that she can’t close her mouth properly.

It breaks my heart that my daughter has ruined her face and figure with her obsession with cosmetic surgery.

Her breast implants are too big and her skin is too dangerously tanned after too many sunbed sessions. Now she’s talking about having a butt lift.

I’m terrified that not only will she ruin her health and fall into debt but she could die!

When I look back at her as a child, she was a naturally gorgeous little girl with the cheeky smile, olive skin and long dark hair.

She’s always been a girly girl and loved make-up and accessories as a child.

We once went to a Brownie disco and she wore a tiara – someone commented that it was like having tea with the queen.

Some of the girls called her names for being very small and dark-skinned when she was at school.

She used to cry if we went on holiday and she started to tan because she didn’t want to be darker. I wonder if that’s where her lack of confidence in her appearance comes from? 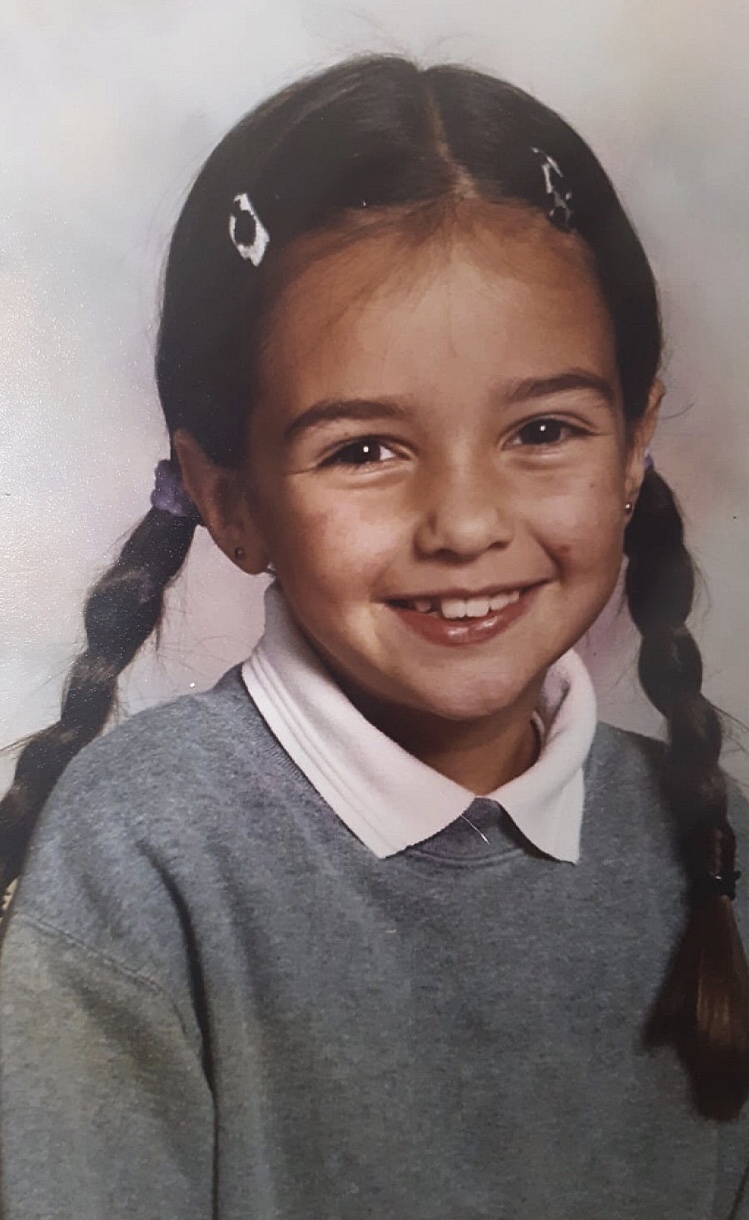 But her obsession with changing her looks didn’t take off until her mid-teens, when she got into hair extensions.

I absolutely hated them, they were minging. They were too thick, not clean, they got trapped in the hoover. My husband called them ‘dead rats’ but Rosie didn't care.

Around the age of 16, she started complaining that she had no boobs. I did my best to talk her out of it, telling her she was perfectly lovely, but she went ahead and got a boob job anyway.

She wanted to go as big as possible but thankfully the doctor was sensible and didn’t make them too big – although they still look huge on her small frame.

We didn’t realise at the time that she’d used £1,000 we’d given to her for her 21st birthday, which she was meant to put towards a house deposit. Her father went mad when he found out.

After the boob job, she became obsessed that her lips didn’t look right – so had some filler.

At first she didn’t look too bad, but she’s kept topping it up and now she’s disfiguring herself, I can’t bear to see it.

She’d used £1,000 we’d given to her for her 21st birthday, which she was meant to put towards a house deposit, for her boob job. Her father went mad when he found out

You hear so many horror stories – you don’t know about the hygiene in some places or what they’re pumping into you!

She’s had Botox which is stupid because who has Botox in their twenties?

Her tanning obsession is also getting out of hand. She is so dark that once, when the police stopped her for speeding and filed a report, they said she was black!

Before she had her own bed at home she would visit a sunbed salon twice a day if she had the time and that terrifies me. 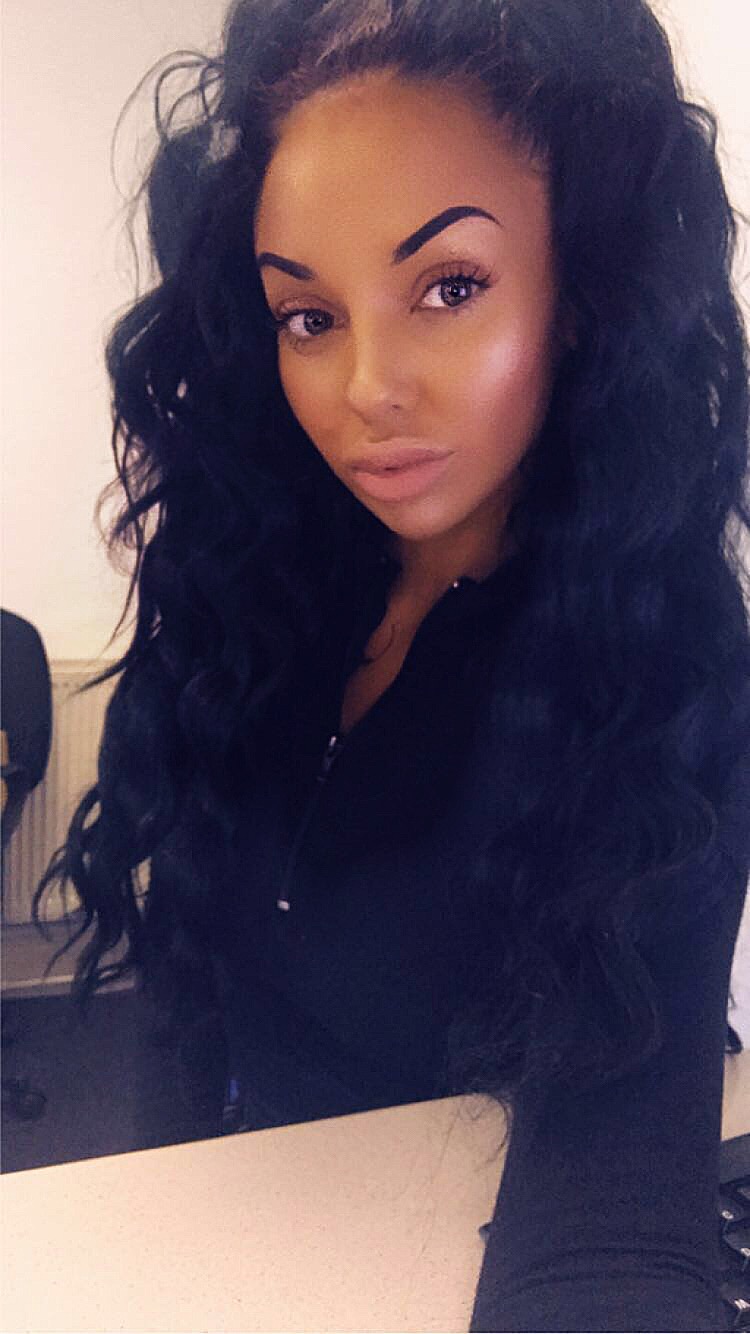 You’d think because Rosie works in healthcare that she’d take the risks more seriously. But all she says is she looks stylish.

She’s now talking about having a butt lift and that horrifies me because people have died after having it.

I worry that she’ll get into debt and also if she’ll end up in one of these Turkish clinics where people have botched surgery.

In my job as a dental nurse, I see patients who have flown abroad for veneers on their teeth – they come back with all kinds of problems.

I’m really trying to talk her out of this one but I can’t seem to make her see sense.

Rosie knows I disapprove so she keeps a lot secret from me. All I know is she's had her boobs, lips and Botox done, and her eyebrows tattooed.

I’ve no idea where she gets these body hang-ups from because my eldest daughter Katie is completely the opposite. She is happy in T-shirt and tracksuit bottoms and not a scrap of make-up.

It’s as if Rosie has body dysmorphia.

When she looks in the mirror, she doesn’t see what everyone else sees and that makes me so sad because she’s so naturally beautiful, inside and out.

Perhaps social media and filters on photographs are to blame.

My husband and I have tried talking to her but our pleas to stop fall on deaf ears. She thinks she looks pretty but I disagree.

She does have ‘resting bitch face’ so people think that’s the real Rosie.

But the real Rosie is sparky, intelligent with so much charisma – I just wish she could see it.