PARENTS are constantly on the lookout for new ways to encourage their kids to help out around the house – and pocket money seems to be a sure way.

But when one mum asked other parents for advice online and shared a system she thought could work, many pointed out she was being tight and that kids wouldn't work for such small amounts. 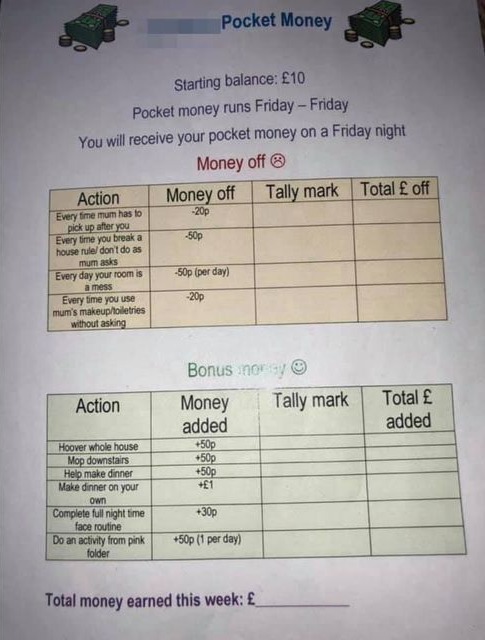 The mum, who has three sons aged 15, 13 and nine, was desperate for a solution and began digging online for some ideas.

She spotted a chart online – which previously went viral – which she liked the idea of as not only do the kids earn some cash for helping around the house, but it also takes away money when they're being messy.

The idea is to start the week off with £10 in a jar and money is deducted for bad behaviour such as breaking a house rule or leaving a mess.

But you can still earn extra money on top of the tenner for completing chores, helping with dinner, hoovering or doing an activity.

How much pocket money do children receive?

According to The Money Advice Service, the average amount kids in the UK get as pocket money is £9.70 per week.

There are differences among the genders though, with boys aged five to 16 getting an average of £10.70 per week, while girls the same age received £8.70.

And kids get more as they get older, with those aged between five and 10 getting on average £7.30 per week.

Posting in the organising your home and your life UK Facebook group, the mum-of-three wrote: "I have 3 sons (age 15, 13 & 9) I’m wanting to start giving them pocket money that is somehow chore/job linked. Does anyone have any advice or charts that work?

"I like the idea of them having an amount that they start with but then they have to complete jobs/chores in order to keep it and if they don’t then they lose money.Give me your suggestions/ideas (picture was an idea I found online, not mine)."

While many loved the idea, they suggested increasing the amount to make it worthwhile for the kids.

"Looks great but I think you’re being a bit tight on the hoovering. You’ll need to up that to at least £1 or I doubt you’ll have any takers!" one mum said. 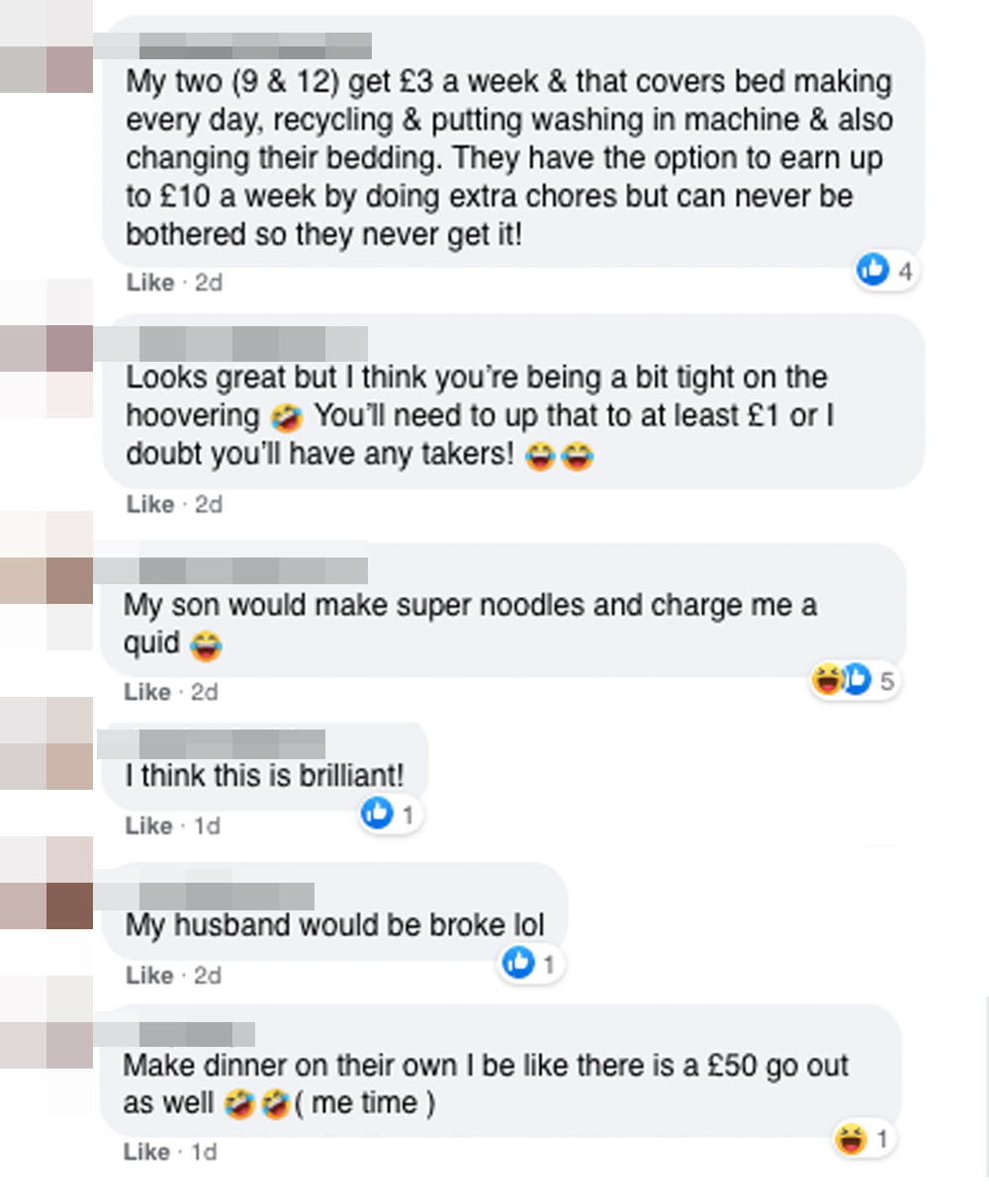 While another said: "Blimey. I love the idea, but I feel like this particular list is heavy on the punishments with very little reward for the good. Hoover the entire house for so little? Ouch!"

And a third agreed: "I don't think a 15 year old is gonna hoover the whole house for 50p lol"

But many suggested keeping it positive saying this particular method probably won't work.

"I'd reward for jobs done, not punish for jobs not, start off at 0, they may become resentful and not comply," one said.

And another agreed: "Personally I'd try and keep it positive. The negative at the top here feels like a self fulfilling prophecy, an expectation of failure."

So, how much you should REALLY be paying your child for chores like dusting and washing the car… so are you being stingy?

Meanwhile, mums are sharing their HUGE daily schedules – but others reckon they’ve got too much time on their hands.

Plus  busy mums share the easy ways they get the housework done in half the time… & how to trick the kids into helping.

END_OF_DOCUMENT_TOKEN_TO_BE_REPLACED

END_OF_DOCUMENT_TOKEN_TO_BE_REPLACED
This website uses cookies to improve your user experience and to provide you with advertisements that are relevant to your interests. By continuing to browse the site you are agreeing to our use of cookies.Ok