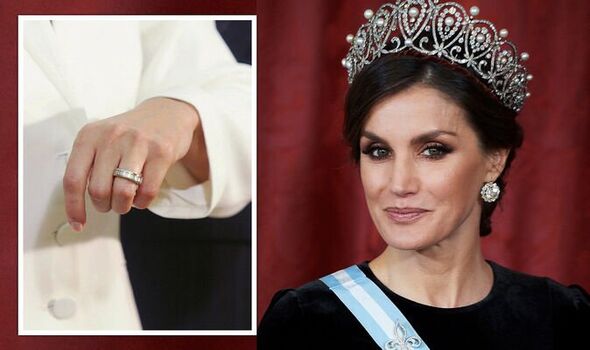 Queen Letizia of Spain and King Felipe VI got engaged in 2003 after he presented her with a very elegant ring which is valued at £35,000, but the royal refuses to wear it.

The jewel is by Spanish designer Suárez and it has a beautiful ‘eternity design’ with no central stone.

“The diamonds in this ring are of exceptional colour and clarity and worth in excess of £35,000,” she explained.

However, the last time Queen Letizia was seen donning the ring was on her wedding day.

The Queen of Spain reportedly decided to stop wearing it for the same reason she never wears her wedding ring.

The Spanish monarch once explained that “the continuous handshakes at the receptions had injured her hand”.

However, there is another reason why the mother-of-two refused to wear the jewel, although it has never been confirmed by the Royal Family.

Spanish journalists Esteban Urreiztieta and Eduardo Inda explained in a royal biography that King Felipe chose the engagement ring but sent his brother-in-law, Iñaki Urdangarin, to collect it.

Iñaki Urdangarin went to the jewellery shop Suarez in Barcelona and paid for it.

At that time, the ring reportedly cost him just 3,000 euros.

The problem, the journalists claimed, is that he paid for the ring using his Nóos company credit card.

Iñaki went to prison because of his company Nóos.

He was found guilty by the Spanish court of tax fraud, embezzlement and influence peddling in 2018.

Although this has never been confirmed by the Spanish Royal Family, journalists Esteban and Inda believe this could be the reason why “Queen Letizia decided to return the ring to the jeweller.”

Instead, the royal regularly wears her Karen Hallam gold-plated ring, which is one of her favourites.

Just like Queen Letizia, many other royals don’t wear their engagement or wedding rings for the same reason.

The same happened with Prince Andrew, who never wore his ring after he married Sarah Ferguson in 1986.