WITH temperatures soaring in the UK, thanks to the current heatwave, the last thing people probably want to be doing is going to work or school.

And one schoolgirl thought that 30 degree sunshine was the perfect excuse to try and get her mum to agree to let her have the day off school. 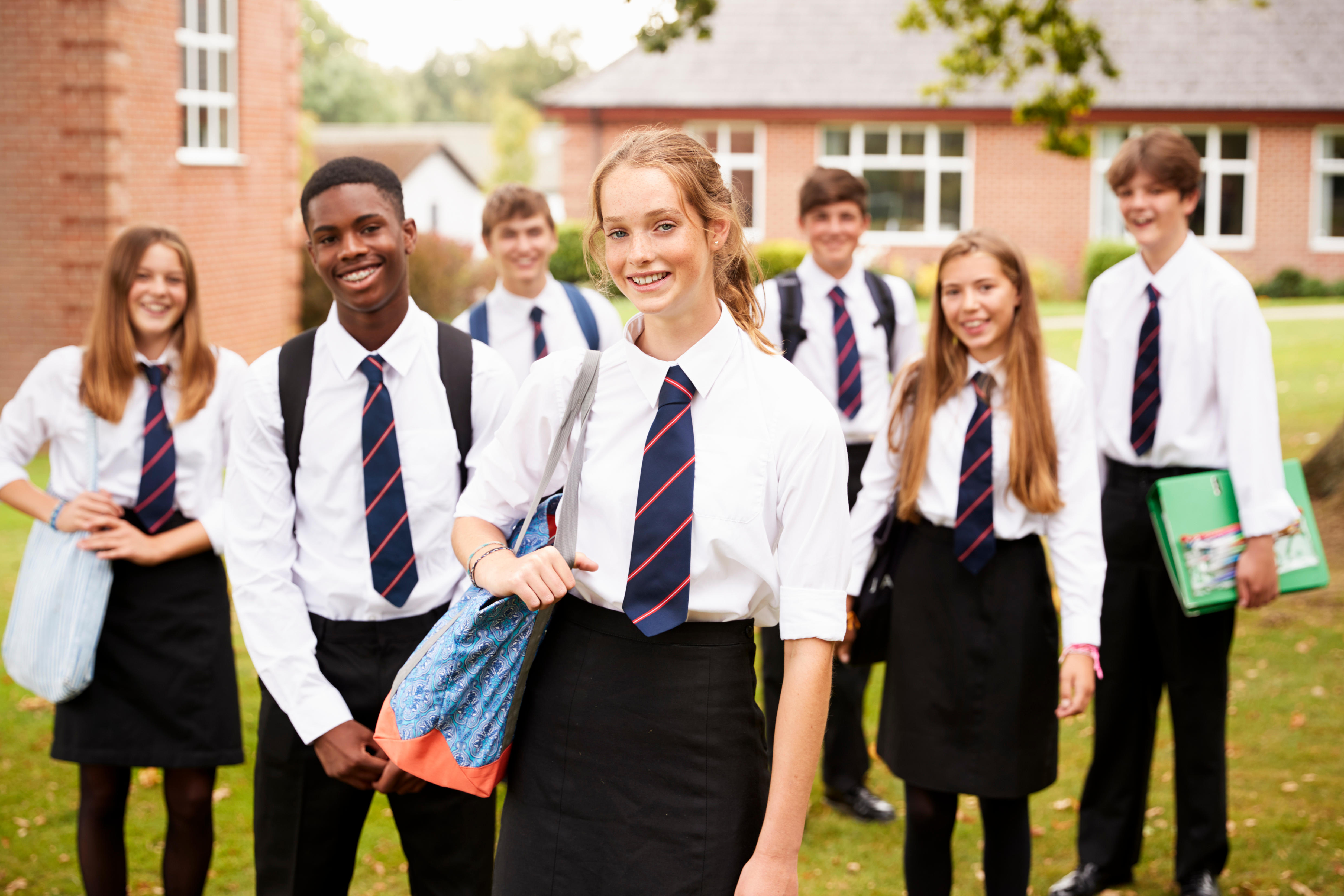 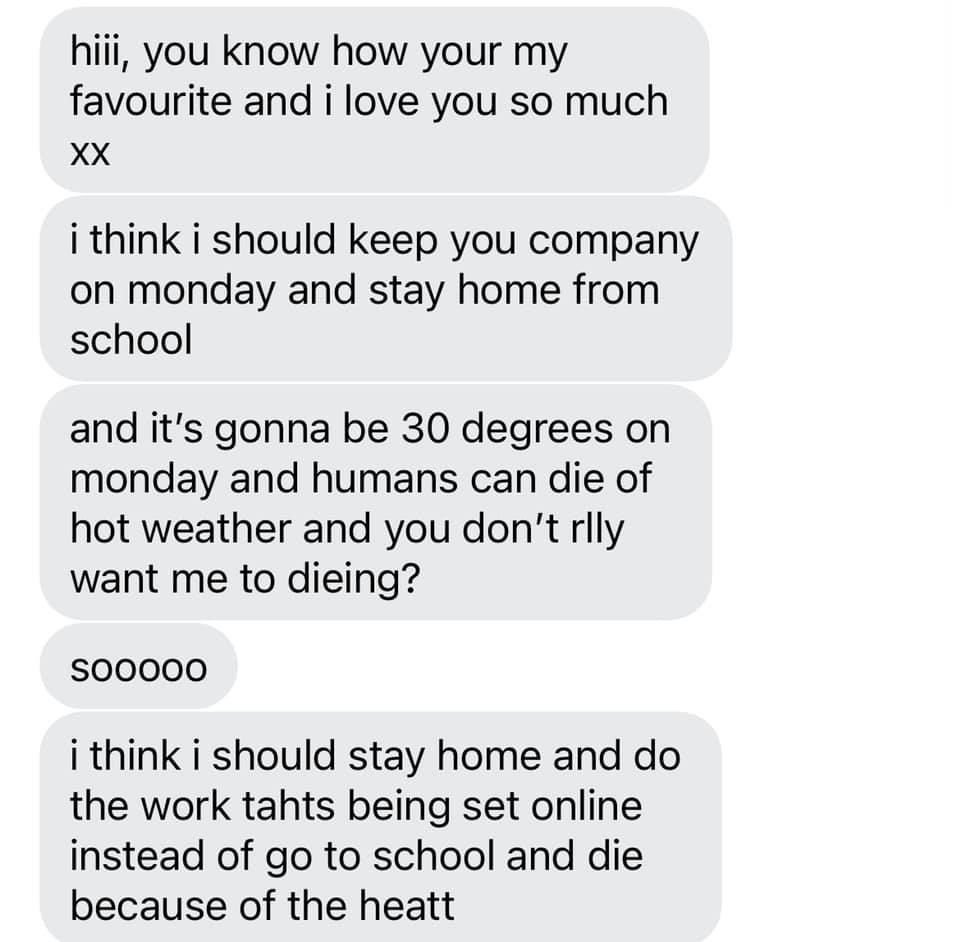 Her mum shared the hilarious text exchange to Facebook and the girl's reasoning for wanting to stay home sent fellow parents into hysterics.

Posting in group Family Lowdown Tips and Ideas, the mum revealed she was reluctant to let her daughter, named Martha, take the day off – especially so close to schools breaking up for summer – as she has two other children and felt she'd have to allow them to skip school too.

That didn't stop the girl from giving it a good go, as she sent a lengthy message and insisted her staying home would be a "win win situation" for everyone.

Sharing screengrabs of her daughter's text online, the mum wrote: "My daughter is with her dad this weekend. I just had to share the messages she sent me yesterday trying to persuade me to let her stay off school tomorrow!

"I also have two other children, so if I let her stay off, I’d have to let them stay off too. We have 6 weeks of all 3 being at home very soon, and I’m not mentally prepared for it just yet!"

Her daughter's text began: "Hii you know how your my favourite and i love you so much xx i think i should keep you company on monday and stay home from school (sic)."

Launching in to her reasons why, Martha continued: "And it's gonna be 30 degrees on monday and humans can die of hot weather and you don't rlly want me to dieing? soooo i think I should stay home (sic)."

She said it would be a "win win situation" for her mum as she wouldn't "die from the heat" and she'd be able to keep her mum company while she works.

Throwing in that she'd up her chores and "legit do anything", Martha not only offered to wash up twice in one week, cook tea, hoover, dust, mow the lawn and paint the decking, but even bring her mum home a Chinese takeaway.

Mum, however, wasn't falling for it and replied with an emoji with its thumb down.

Naturally, Martha asked why the answer was no – given the sweet deal she was prepared to make – and her mum had the best response by simply responding with the link to the official government advice on school absence.

The official guidelines state parents can be "prosecuted" and that schools and the local council can take legal action to enforce attendance if a child is missing "without good reason".

That was all it took for a shocked Martha to back down, as she simply replied: "omg."

Parents were loving the exchange and others joked they would be adopting the same approach as Martha's mum the next time their kids tried to wangle a day off.

"I am loving the reply with the gov website," said one mum who shared a series of crying laughing emojis in response.

"The best bit is you send her one emoji in response to an essay!" posted another.

A third commented: "Your response. I'm dying! A woman after my own heart."

Other mums joked that the list of chores was enough to convince them, with one posting: "If she actually did all those chores that sounds like a pretty good deal for you to me!"

Another teased: "She can stay home at mine if she is willing to carry out that list of chores / tasks!!!!"

Martha's mum later shared an update and said that while she was a "mean mum" and sent her to school, it was Martha that had the last laugh as she was sent home to isolate until the end of the week when school finished for the year.

"Being the mean mum I am, I sent her to school. It’s had a text to say she has been in contact with a positive Covid case and has had to come home," the mum revealed.

"To be fair, she was in contact with them last Thursday so only has to isolate til the weekend. I am going to keep my other two home now though!" 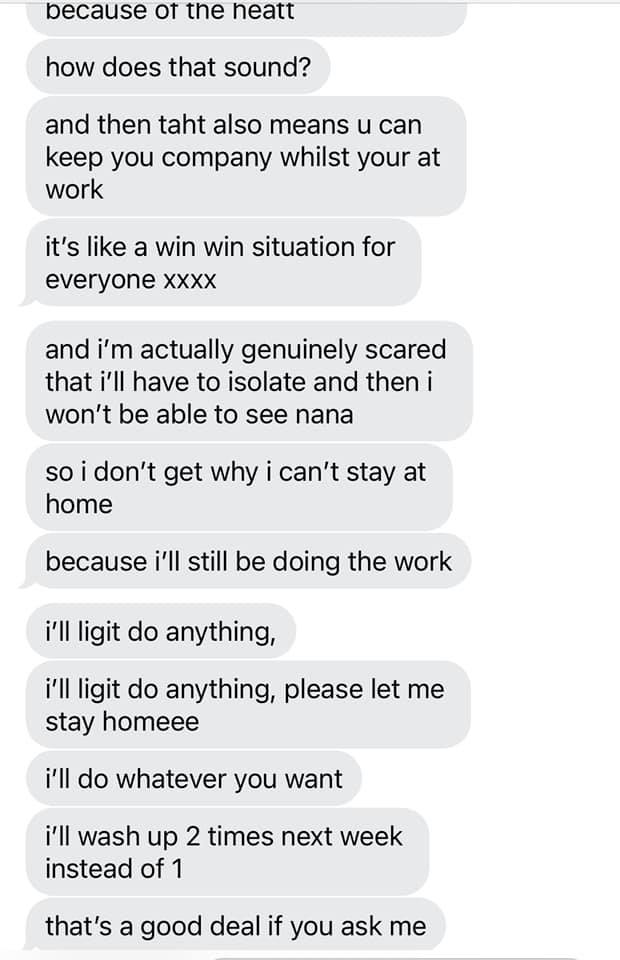 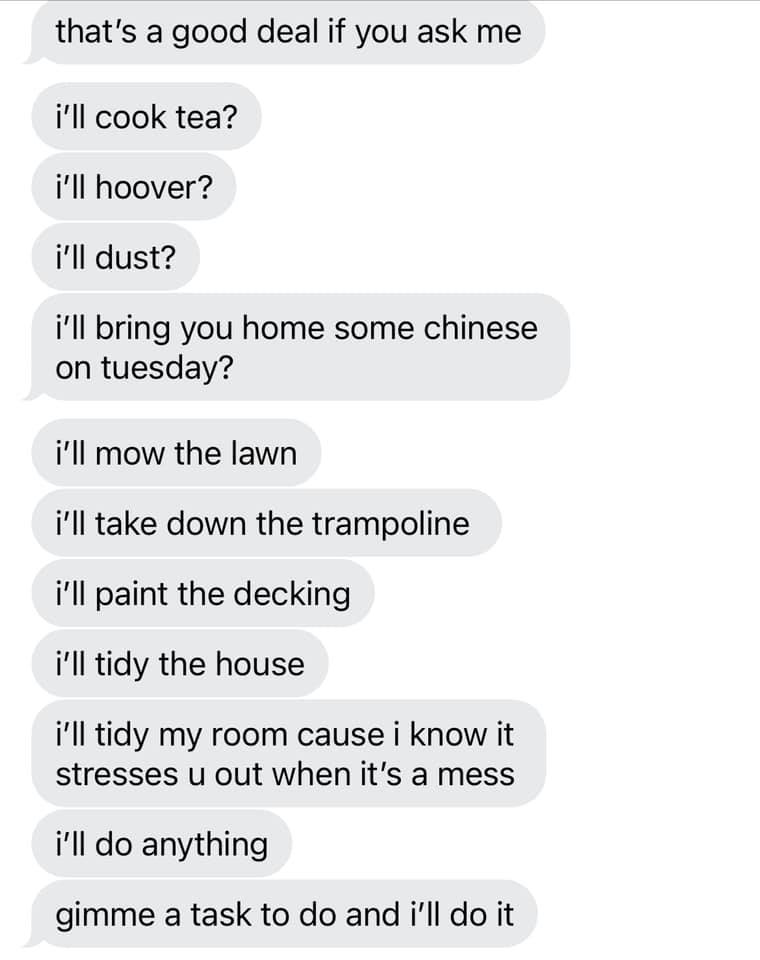 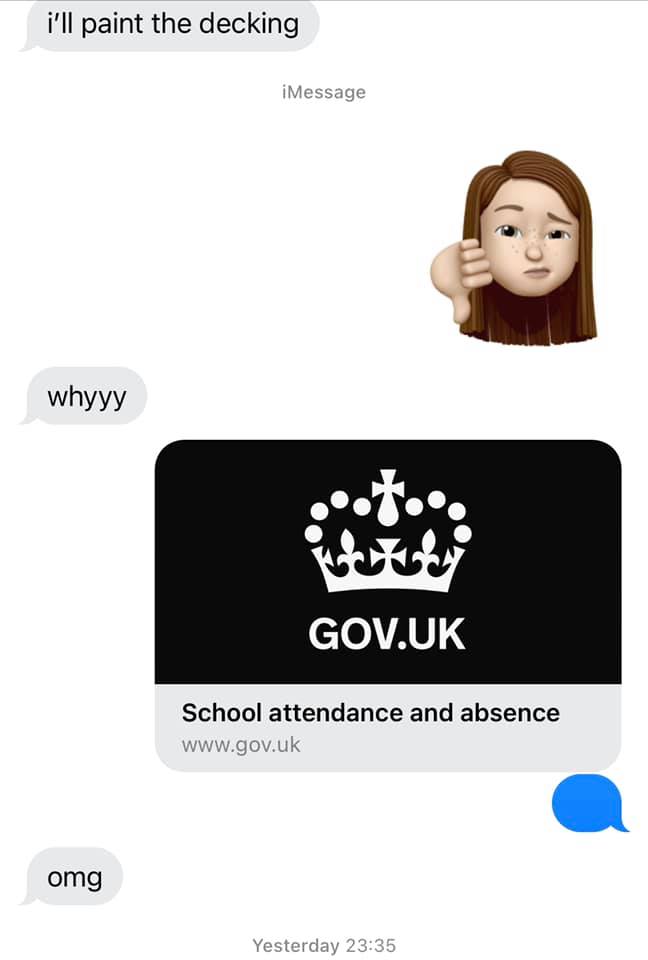 Meanwhile, check out these sassy mums who got one over on their kids with these savage texts.

Plus, this mum redecorating her home finds funny ‘tip’ left by previous owner underneath the wallpaper.

And one mortified mum reveals huge knot in daughter’s hair – and she tries using SEVEN bottles of conditioner to detangle it.