Billie Eilish showed off her sillier side on Instagram in a series of hilarious videos on November 30. In the clips, the singer slapped her chest and laughed hysterically, which caught the attention of her adorable dog. Take a look!

Billie Eilish got silly on the Gram’ on Monday night while lounging at home with her pup. The Grammy winner, 18, took to her Instagram Stories to share a clip of herself slapping her breast with her hand. The loud noise caused her dog to quickly turn its head toward her, which made Billie laugh hysterically. The random act propelled her to go on a posting spree, where she proceeded to slap herself two more times.

In a separate video, Billie assured her fans that she wasn’t hurting herself with her playful slaps. “When you got [breasts] like this, nothing hurts,” she said, laughing even harder than her previous videos. Billie ended the clip with (you guessed it), another slap to the chest.

Amidst her posting spree, Billie’s brother and music collaborator, Finneas O’Connell can be seen singing and playing the piano as if she wasn’t even filming. Talk about tuning it all out! Meanwhile, Billie’s many Grammy Awards sat on a shelf in the background of her clips. 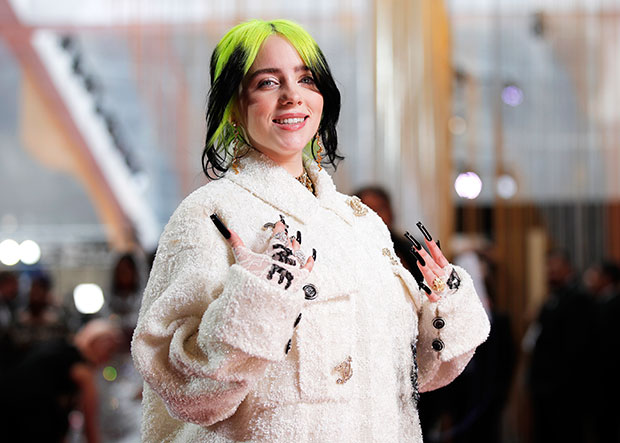 Billie’s comical posts came just after her rather serious interview with Vanity Fair, in which she responded to trolls who criticized her appearance in paparazzi photos in October.

“There’s this picture of me running from my car to my brother’s front door on like a 110 degree day in a tank top. And people were like, ‘Damn, Billie got fat!’,” Billie recalled. “And I’m like, “Nope, this is how I look, you’ve just never seen it before!,’” she said while talking about the biggest and weirdest rumors she’s heard about herself. Elsewhere in the interview, Billie revealed that she got her first tattoo this year, “but, you won’t ever see it,” she teased.