Home » Celebrities » Demi Lovato shares what she thinks is ‘the best part’ of being single, 2 months after her whirlwind engagement ended

Demi Lovato shares what she thinks is ‘the best part’ of being single, 2 months after her whirlwind engagement ended 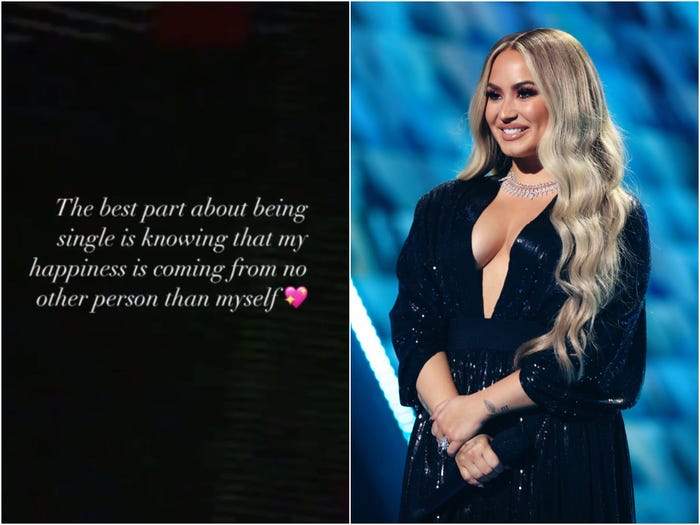 Demi Lovato shared a message of positivity about being single to her Instagram story, which served as a reminder to herself and others that you don't need to be in a relationship be be happy.

"The best part about being single is knowing that my happiness is coming from no other person than myself," the 28-year-old singer wrote.

Lovato has been single for two months, following her split from actor Max Ehrich in September. The couple got together in March and quarantined together during the coronavirus lockdown, then got engaged in July. However, they broke things off two months later "to focus on their respective careers," a source said at the time.

Things quickly soured, with both Lovato and Ehrich deleting every trace of each other from their social media pages. Ehrich then started accusing Lovato of using him as a "pawn" in a "calculated PR stunt." He then claimed that he was informed of the breakup through tabloids while on the set of his new movie, "Southern Gospel," which a source later told E! News wasn't true.

Ehrich was also seen crying on the beach where he proposed to Lovato, which some Twitter users accused him of staging for papparazzi photos.

Lovato joked that 2020 had been "the longest three years" of her life at the People's Choice Awards in November.

"Don't get me wrong, it started out amazing," she said. "I performed at the Grammys and sang the national anthem at the Super Bowl. But then COVID hit and everything shut down. So I did what everyone else did, I went into lockdown mode, and got engaged."