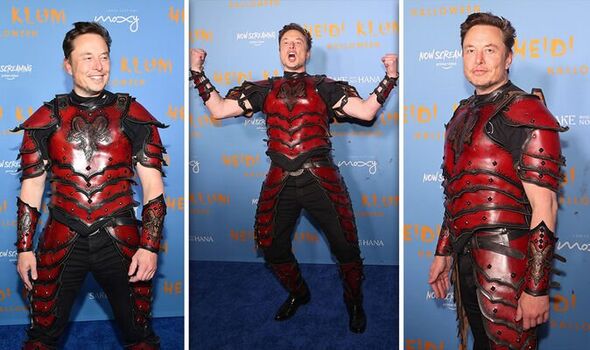 Elon Musk, 51, wasn’t afraid to show he was having a good time as he attended model Heidi Klum’s Halloween bash on Manhattan’s Lower East Side last night. The Tesla CEO, who recently completed his $44 billion deal to buy Twitter, showed up on a red carpet in what appeared to be a “Devil’s Champion” costume.

Elon was seen at the New York shindig accompanied by his mother, Maye Musk, who was dressed all in black.

The billionaire could be seen raising his fists in a triumphant pose as he showed off his armoured costume.

The outfit was bright red and appeared to have a satanic symbol emblazoned on the chest.

The costume was complete with arm and leg straps, which he wore over a plain black T-shirt and black trousers.

New York store AbracadabraNYC features what appears to be the same costume online, listing the price as $7,500 on their website.

Elon’s outing comes after his Twitter takeover sparked backlash from some, including several celebrities like Jameela Jamil and Shonda Rhimes, who have quit the platform.

Elon Musk, 51, looked triumphant as he posed on the red carpet

The star was all smiles as he raised his fists into the air at the glitzy New York event.

The billionaire secured the popular platform in a $44 billion deal.

The Tesla founder made a bold choice to wear what appeared to be a “devil’s champion” costume.

The SpaceX CEO wore a breastplate emblazoned with what looked like a satanic symbol.

The Twitter owner wore a black T-shirt and black trousers and paired them with some black loafers.

Elon Musk was joined by his glamorous mother, Maye Musk, at the star-studded event

The billionaire’s mother wore a black tassel dress with a black leather jacket over the top and finished off her look with some striking eye makeup.