Gordon Ramsay has been forced deny ‘almost causing an accident’ after a local resident accused him of jumping a red light while on a bike ride on Sunday.

The celebrity chef, 53, who is currently isolating in his Cornish holiday home after fleeing London, has claimed the resident’s version of events ‘didn’t happen’.

Gordon has previously irked locals after moving into his £4.4million second home in the West Country during the coronavirus pandemic. 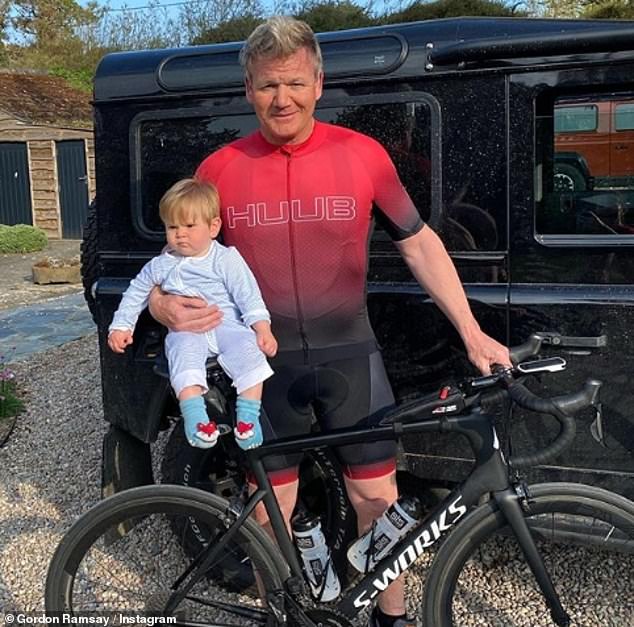 Denial: Gordon Ramsay has been forced deny ‘almost causing an accident’ after a local resident accused him of jumping a red light while on a bike ride on Sunday

The TV personality has fallen out of favour again after a driver accused him of running a red light while out on a 26.2-mile bike ride, reports the Sun.

In a picture taken by the irate local obtained by the website, Gordon was seen dressed in the same cycling gear he had posted on Instagram that day.

They said: ‘I was delivering some shopping to my daughter and this t**t decides to go through a red light at Trewornan Bridge.

‘Very nearly could have been a nasty accident as a car was coming the other way who had to slam on his brakes!’

‘I didn’t realise it was him at first he was travelling with another man and a lady. The other man also went through the red light, but the lady stopped at the red light.’

Gordon’s rep told the news outlet that that claims are untrue. MailOnline have contacted his representatives for further comment.

The star has completed two extensive cycles while staying in the area, and celebrated completing his latest route with a post on social media.

He shared a snap of himself posing alongside his bike in red and black Lycra after finishing his latest ride.

He had one-year-old son Oscar, who looked suitably unimpressed, tucked under his arm in an adorable blue baby-grow with matching booties.

‘Thinking about all those charities missing out on today’s London marathon, trust me we will make up for in October especially with my little mascot @oscarjramsay @huubdesign #gosh #gordonandtanaramsayfoundation #returnstronger.’ 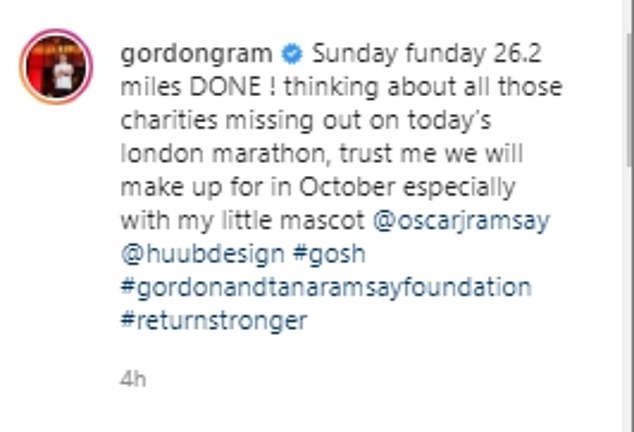 He already risked neighbours taking further umbrage after sharing a snapshot of himself heading out on a separate bike ride the weekend prior.

He captioned the image: ‘What a bike ride today, hills galore and some stunning country side thank you @huubdesign for the best gear and of course the ferrari of bikes @iamspecialized @iamspecialized_road Ps Deano I’m going to kick your a**e in the next tri [sic]’

The Hell’s Kitchen star then shared a series of clips overlooking Towan Beach in Newquay as he stopped for a rest before cycling the 11 miles back home. 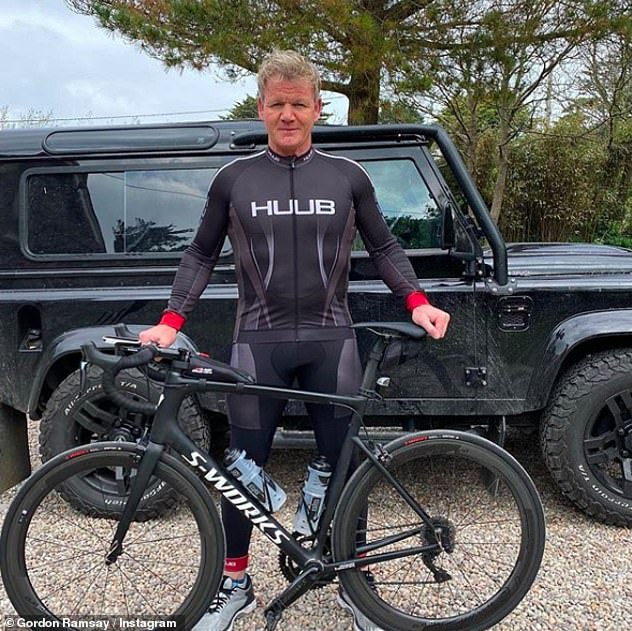 Keeping fit: Gordon risked further umbrage from his neighbours after heading out on a 22 mile cycle ride around Cornwall last week

Gordon’s post sparked some annoyed comments online, as one follower remarked: ‘Stay at home’, whilst another added ‘hope you only went for 1 hour’.

As someone responded, ‘course not! Apparently it doesn’t apply to everyone’, the commenter quipped back, ‘yeah celebrity’s are better than us so they can do what they want’.

Another follower then joked: ‘make sure you don’t get caught by the neighbours’. 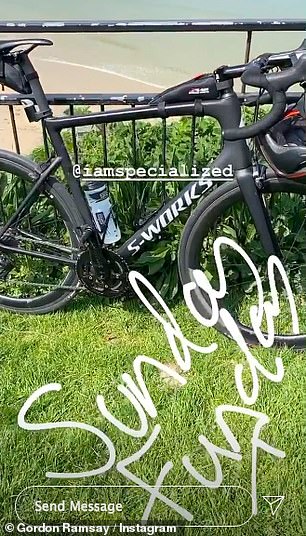 Taking it easy: The Hell’s Kitchen star shared a series of clips overlooking Towan Beach in Newquay last weekend as he stopped for a rest before cycling the 11 miles back home 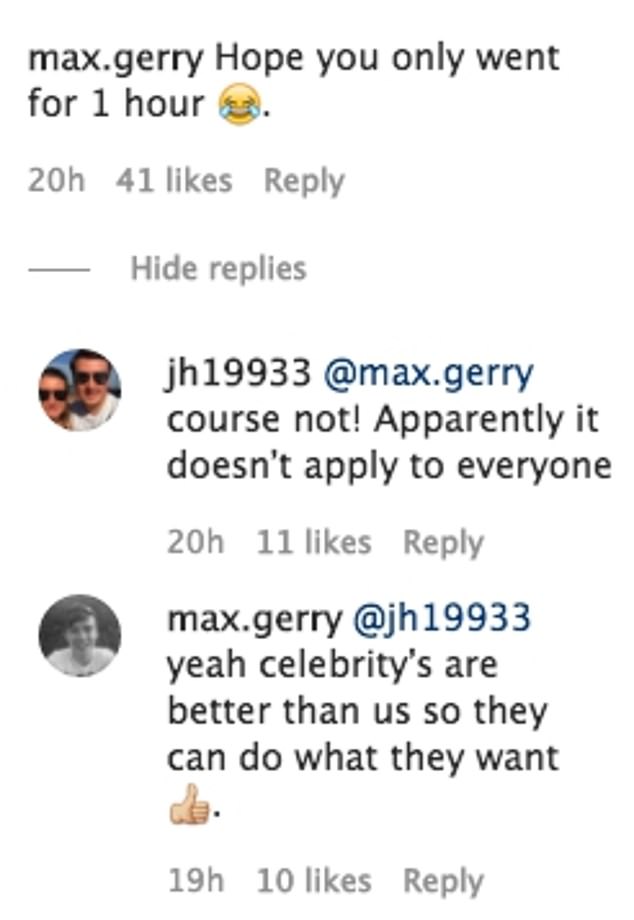 Whilst the UK stays in lockdown to slow the spread of COVID-19, the government advice is to ‘stay local and use open spaces near to your home where possible – do not travel unnecessarily’.

Other advice is to ‘make use of your garden for exercise and fresh air’.

Whilst there is no official guidance on how long people should be going outside to exercise, last month, Michael Gove advised that walks should be limited for an hour, and jogging for 30 minutes. 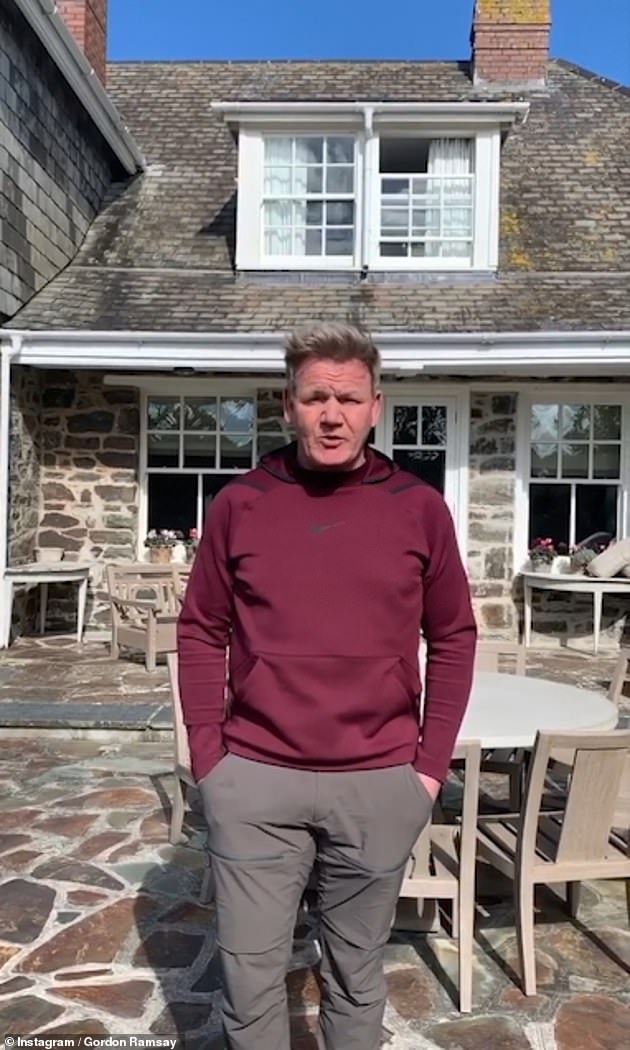 Controversy: The Hell’s Kitchen star has faced huge backlash from neighbours who claimed he’s ‘brought coronavirus to them’ during the lockdown

Last month, Gordon was heavily criticised by his Cornish neighbours who claimed he had ‘brought the virus with him’ after moving his family to the mansion during the pandemic.

The anger is somewhat confused, however, as Gordon and his family retreated to their second home at the start of the lockdown, which is not against the government’s rules.

This comes after Gordon made a thinly-veiled dig at the Cornish locals who have berated him for relocating his family – by heaping praise on a kindly neighbour. 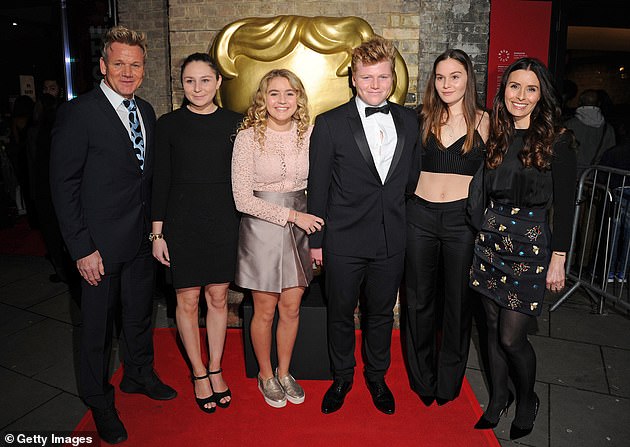 Close family: Gordon has relocated to Cornwall with his family – daughter Megan, 22, twins Jack and Holly, 20, daughter Matilda, 18, and wife Tana, 45 (from left to right)

The chef received a delivery of fresh asparagus, left by a local on his doorstep with a hand-written note, which read: ‘A little gift from the fields across your house.’

‘Now what a lovely, beautiful, generous little gift,’ the 53-year-old gushed. ‘C’mon, seriously, that’s literally growing in the back of my garden. Now that’s what I call love thy neighbour, see?

‘That’s how you look after each other across these difficult times. There you go. I’m sure one local will whinge about the asparagus!’

The Ramsays have been the target of fury in the Polzeath Beach area, where they are living in their home.

While people with second homes are not allowed to travel back and forth, choosing one home and sitting out the lockdown in it is not against official advice.

A friend of the family told MailOnline: ‘The family see Cornwall as their family home when the kids are back from uni and Gordon back from filming around the world it’s where they spend all their family time together.

‘They’ve been spending time there for 10 years and Jack actually lives in the house there full time too. Most of their neighbours are so welcoming and they love being part of the community.

‘They’ve been following the government advice along with the rest of the country since they arrived on March 20th and the campaign against them is hurtful and unnecessary at a time when we should all be coming together and supporting each other.’