Home » Celebrities » Inside The Many Legal Issues Of John McAfee

Inside The Many Legal Issues Of John McAfee

The following article contains mentions of death by suicide.

John McAfee, who was found dead by suicide in his prison cell on June 23, founded the world’s largest anti-virus company McAfee in 1987 and ran it until 1994 when he resigned abruptly, per BBC. McAfee was an eccentric guy, to say the least, who faced a myriad of legal issues. Basically, he went from being the founder of McAfee with a $100 million net worth to a fugitive from justice wanted for a laundry list of crimes, ranging from tax evasion to murder, according to the outlet. Let’s just dive in.

In 2009, McAfee moved to Belize and launched what he was calling a new-age pharmaceutical company. Per Gizmodo, officials in Belize raided his house in May 2012, and found $20,000 in cash, a lab full of chemistry equipment, and dozens of guns, according to the site. Police found that McAfee wasn’t making drugs, as suspected, but he was making an “herbal antibacterial compound.” He was released, but the police were sure they had “missed something.”

Read on for the details on McAfee’s wide-ranging legal problems.

John McAfee was a prime suspect in a murder case 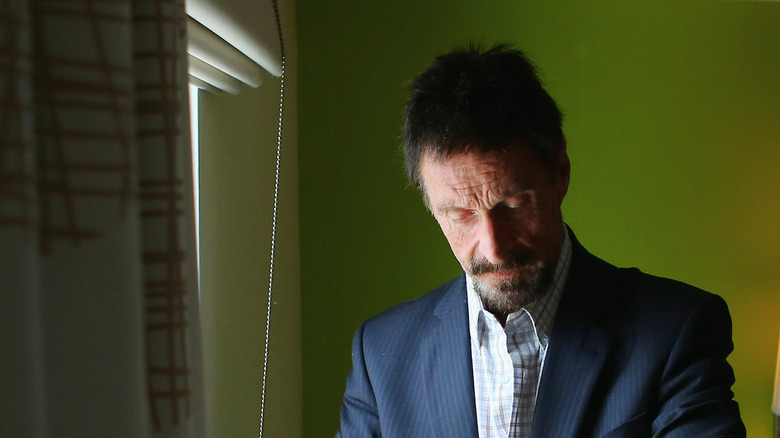 In November 2012, Belize officials named John McAfee the prime suspect in the murder of his neighbor Gregory Faull. McAfee thought he may have been set up and that McAfee himself was supposed to be the one murdered, not Faull, he told Wired. McAfee then fled to Guatemala where he was arrested and deported to the U.S. The murder accusations against McAfee were “never proven in criminal court,” per the outlet.

McAfee lived fairly freely in the U.S. until ditching the country for Spain. On October 5, 2020, he was arrested in Barcelona for alleged tax evasion on millions in the U.S., per CNBC. A few months earlier, McAfee was arrested in the Dominican Republic for a massive amount of guns and ammunition, per Reuters. He was held for four days.

The next day, according to the Daily Mail, the SEC filed a complaint claiming that McAfee had earned $23 million promoting Initial Coin Offerings while failing to disclose that he was also an investor. On March 5, 2021, McAfee was indicted and charged with a cryptocurrency “pump and dump” scheme, per The Verge.

On June 23, the high court of Spain agreed to extradite McAfee to face tax evasion charges in the U.S. He was facing decades in prison if convicted. That same day, he was found dead by suicide in his prison cell.

If you or anyone you know is having suicidal thoughts, please call the National Suicide Prevention Lifeline​ at​ 1-800-273-TALK (8255)​.