‘Everyday my heart sinks but he is still HERE’: Kate Garraway updates fans on husband Derek’s COVID-19 battle while praising her kids for ‘staying strong’ as they lead the stars in weekly Clap for Carers salute

Kate Garraway put on a brave face as she joined her children for the weekly Clap for Carers applause on Thursday, while her critically-ill husband Derek Draper continues to fight coronavirus in hospital.

The Good Morning Britain presenter, 53, gave an update on the 52-year-old’s battle in a heartfelt Instagram post, revealing that while her ‘heart sinks everyday’, Derek is ‘still here’ as he remains in ICU.

Host Kate also expressed her gratitude towards her kids Darcey, 14, and Billy, 10, for ‘staying strong’ during the difficult time, with her daughter surprising her by purchasing an NHS ‘Better Together’ T-shirt with her debit card. 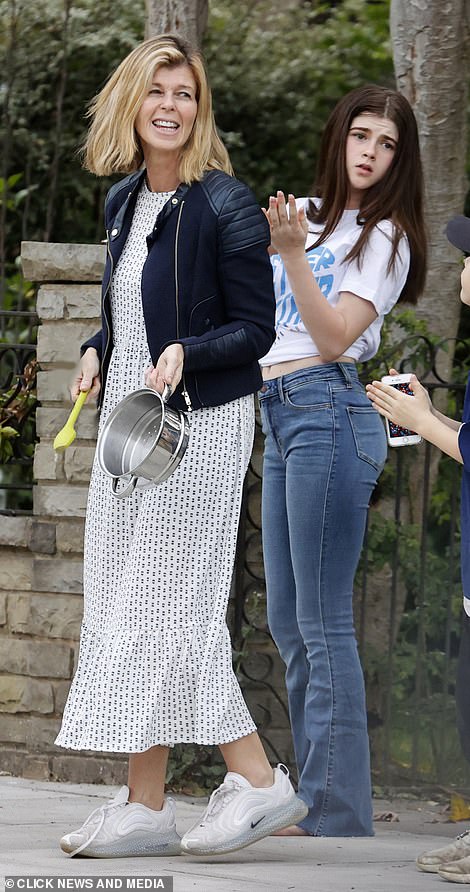 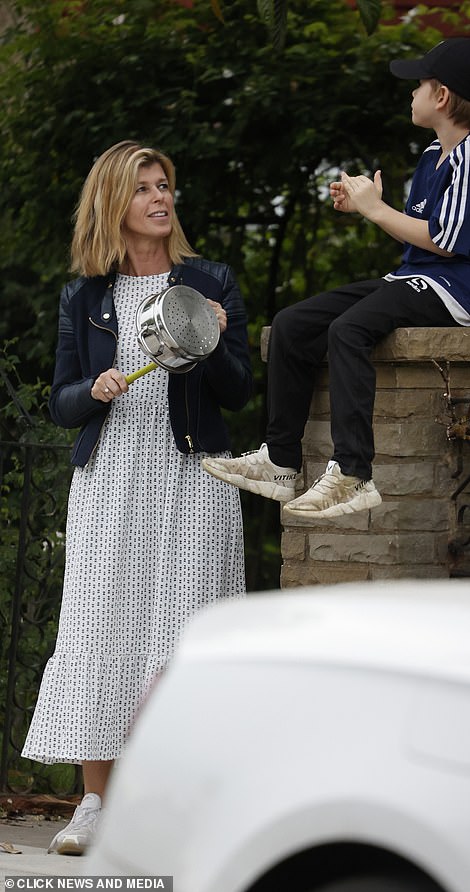 Thinking of you: Kate Garraway joined her kids for the Clap for Carers applause on Thursday as her husband Derek Draper continues to battle coronavirus (pictured with daughter Darcey, 14, and son Billy, 10)

‘I didn’t even know Darcey had bought this t shirt on line ( with my card !) until she emerged tonight but I do know how grateful she is to the NHS’, the TV veteran wrote on her social media account alongside a clip of the trio clapping outside.

Kate shared insight into how she’s coping with her long-time love’s health issues, explaining: ‘I couldn’t be prouder of how she & Billy have coped with these past 2 horrific months for our family – always finding ways of lifting our spirits & staying strong even when they can see me wobbling.

‘Its so wonderful to see little green shoots of hope that this dreadful disease is easing and that hopefully soon we might all be able to see each other again and hug our nearest and dearest.’ [sic]

Revealing author Derek is still fighting for his life, the Smooth Radio presenter added: ‘But the journey for me and my family seems to be far from over as everyday my heart sinks as I learn new & devastating ways this virus has more battles for Derek to fight. But he is still HERE & so there is still hope. 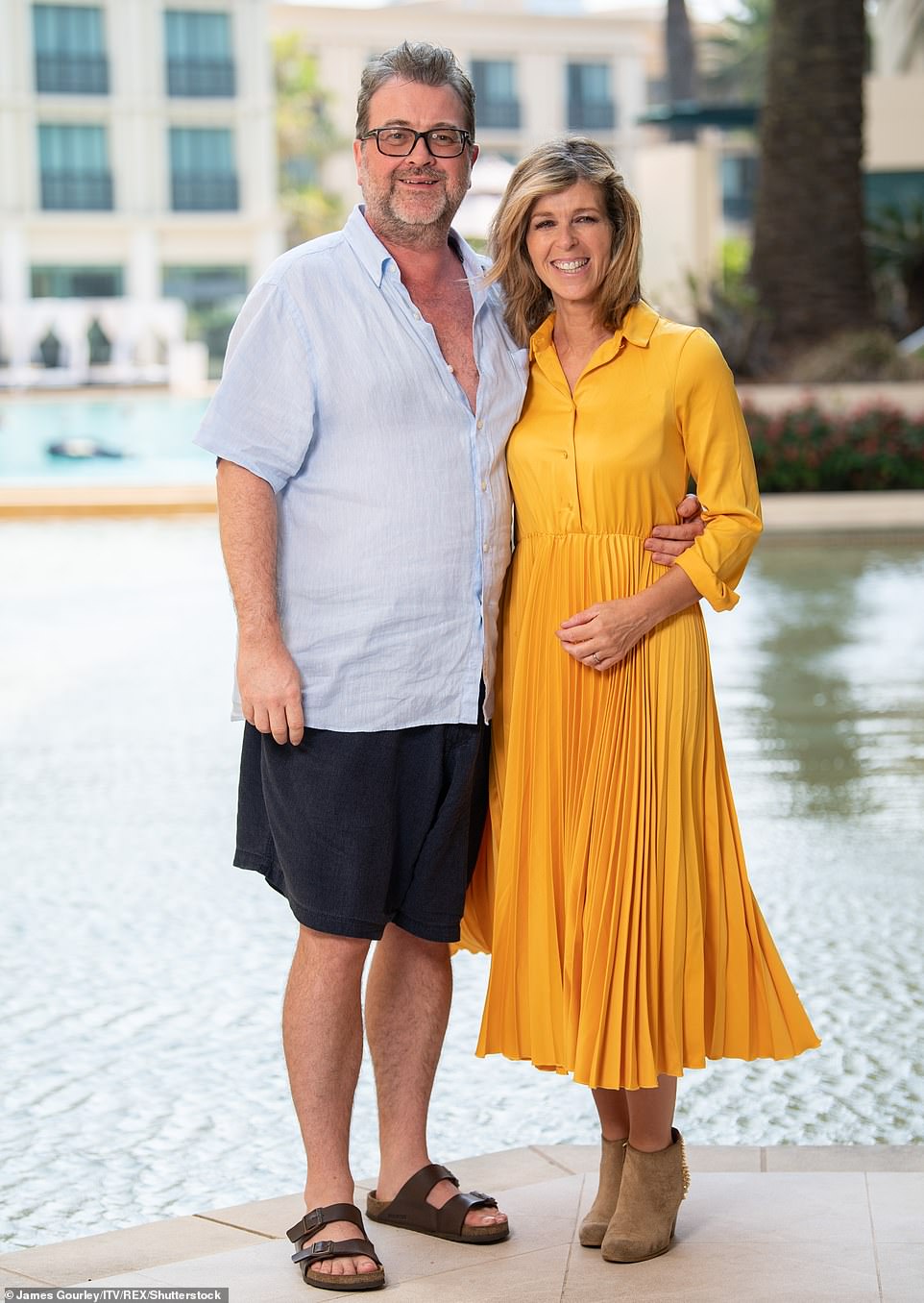 Critically-ill: Former lobbyist Derek, 52, remains in a coma as he continues his battle against the deadly virus (pictured in December) 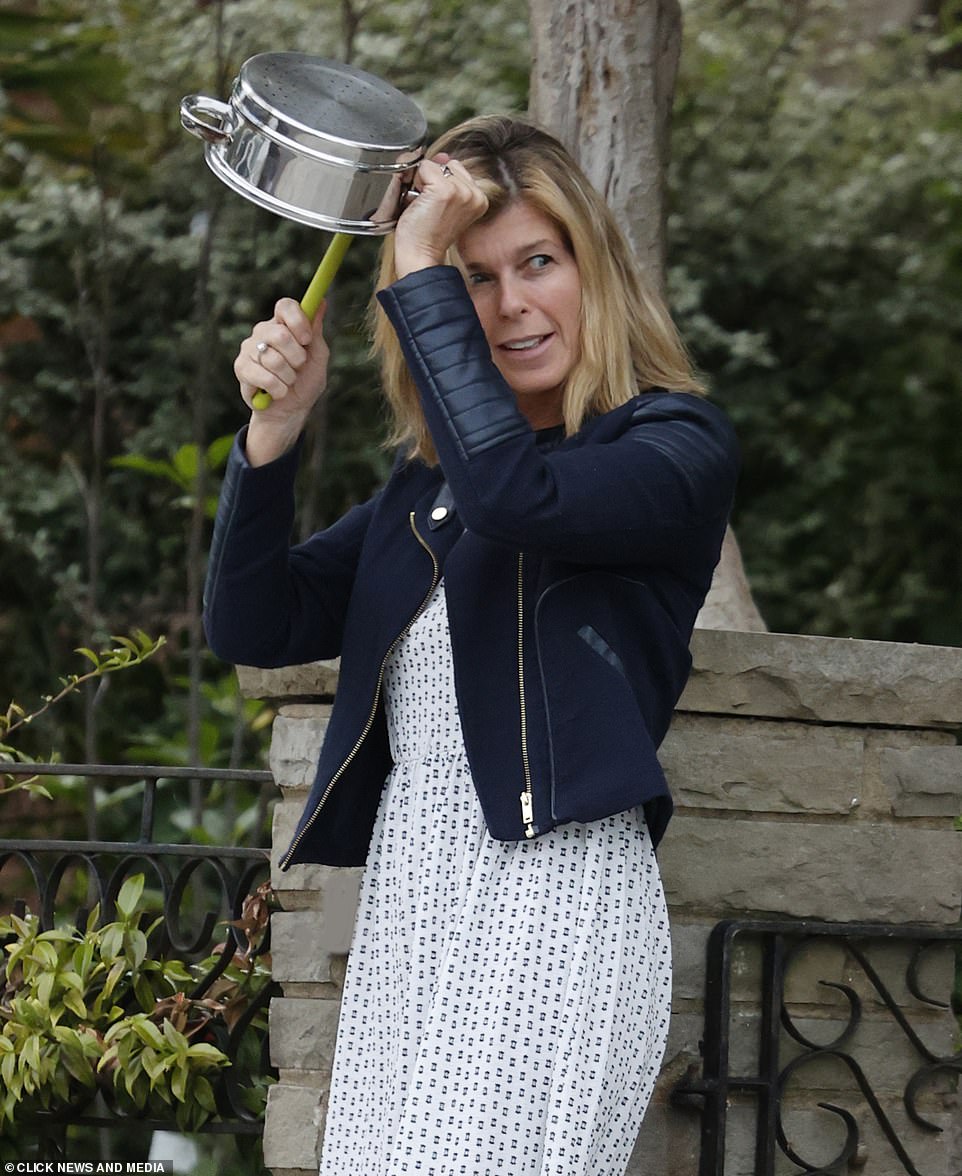 Staying positive: The host expressed her gratitude towards healthcare professionals amid the COVID-19 by banging pots with a neon green spoon 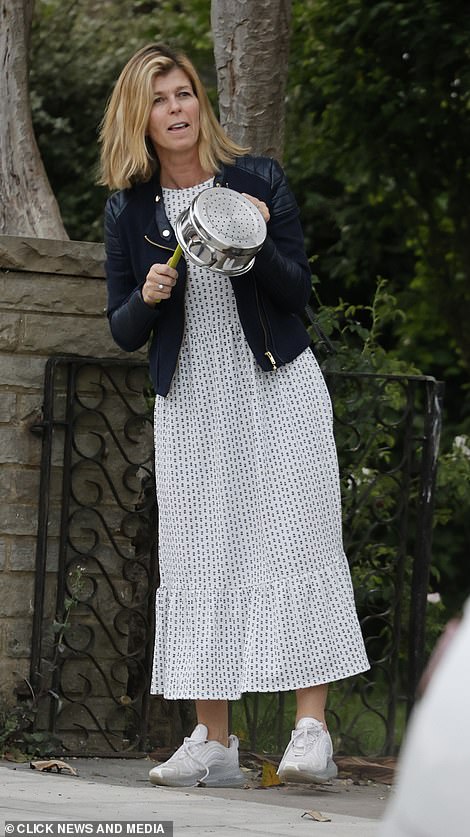 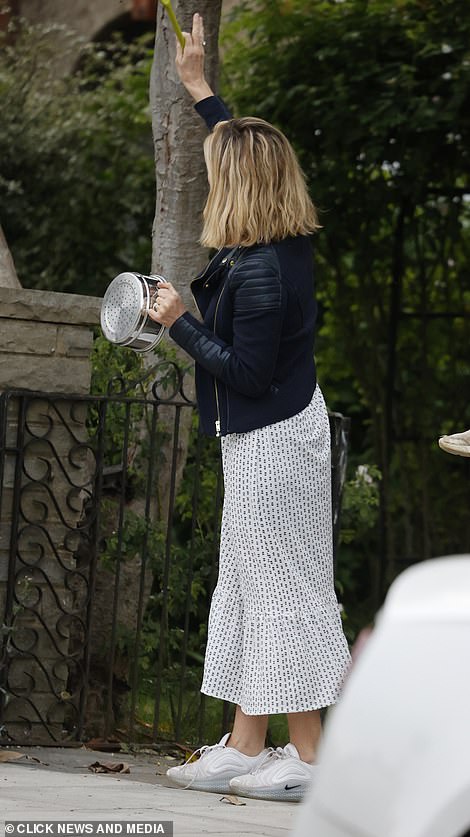 Touched: Amid the 52-year-old former lobbyist’s health battle, the news anchor still appeared in good spirits as she engaged in conversations with her kids and neighbours

‘My heartfelt thoughts and prayers go out to anyone who will be affected by this, not just for the next few weeks but for the foreseeable future. That will be the case for many who have suffered from the disease, but also the front line workers who have been helping to treat the worst affected.

‘The physical and mental scars will run deep and so we need to stick together far beyond the end of lockdown. Thank you so much for all your messages.

‘I am going to share more of the things that have been keeping me going on clubgarraway.com . And I would love to hear more of your challenges & thoughts there too. Sharing is such a comfort.’ [sic]

She shared her appreciation for the healthcare professionals amid the COVID-19 by banging pots with a neon green spoon, no doubt thinking of her long-term partner. 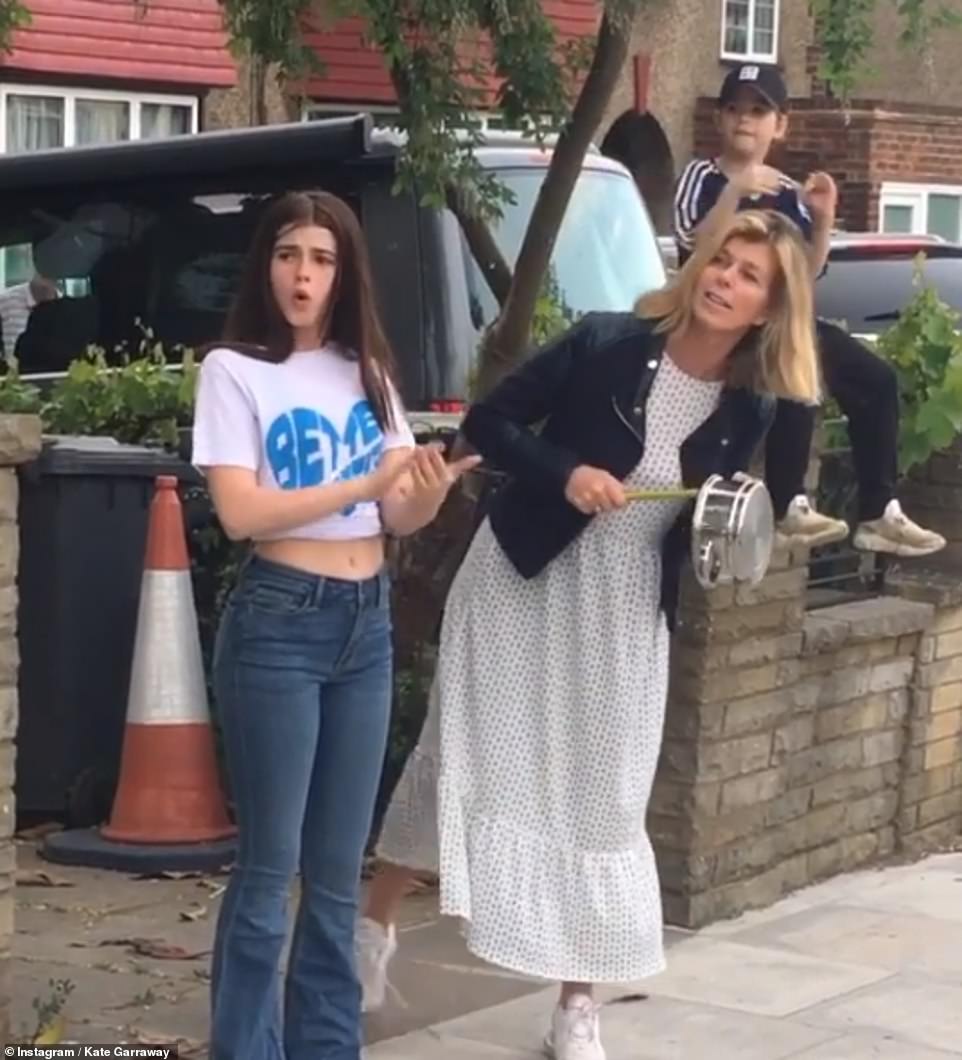 ‘I couldn’t be prouder of them white these past two horrific months for our family’: The TV veteran uploaded a video of the trio clapping on her social media account alongside a heartfelt caption 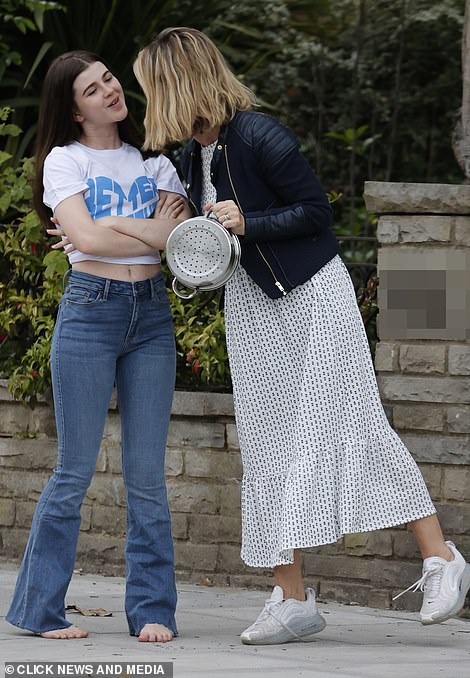 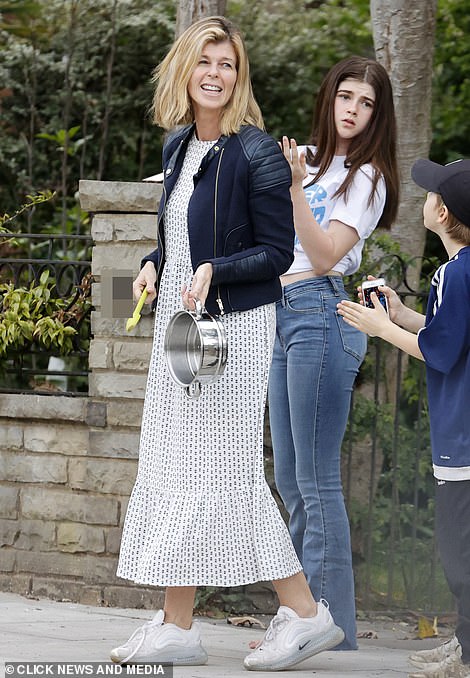 Nearest and dearest: Kate’s mini-me stood beside her as she clapped in support of the NHS, while young Billy joined his relatives on a brick fence 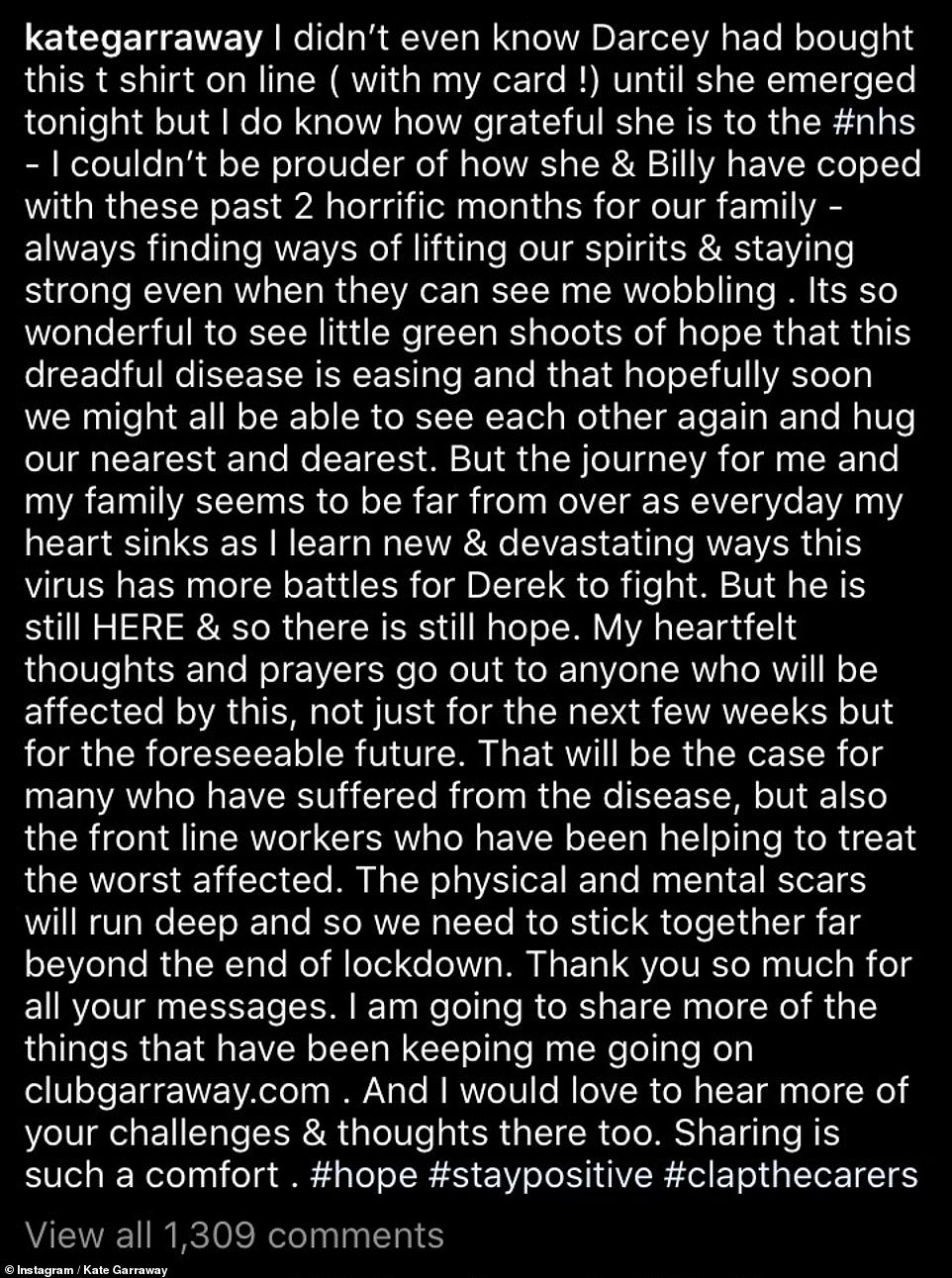 ‘The physical and mental scars will run deep and so we need to stick together far beyond the end of lockdown’: The mum-of-two shared insight into how she’s coping with her long-time love’s health issues, while spreading positivity with her followers 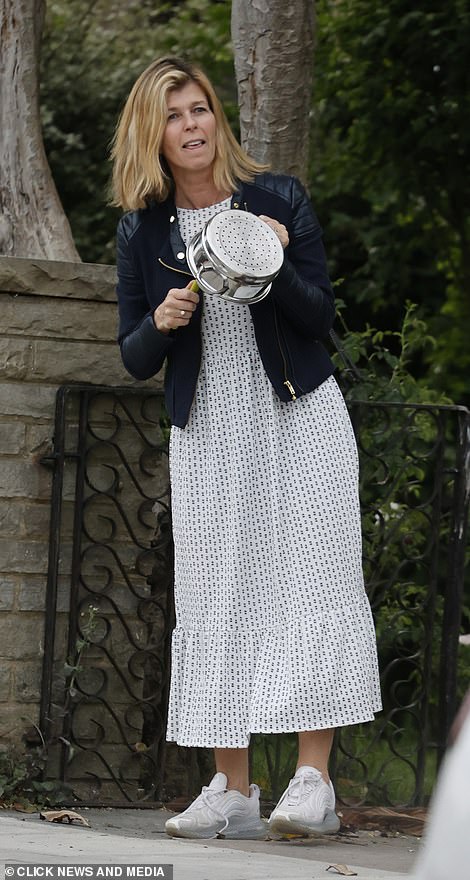 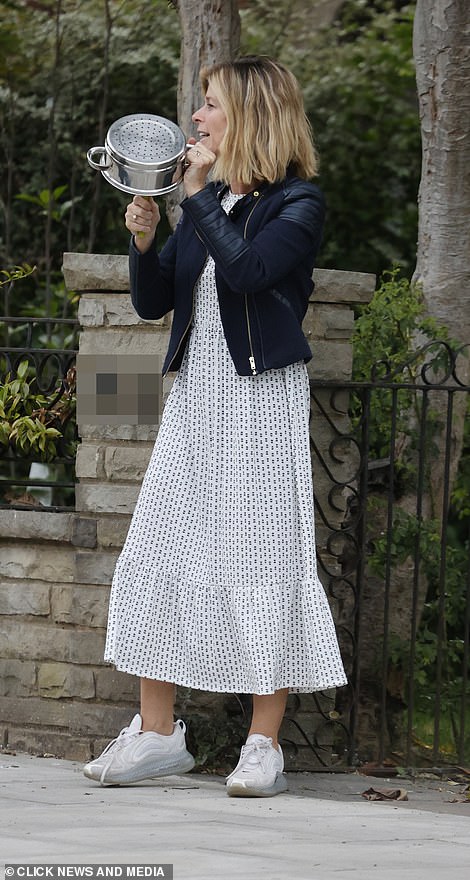 Attire: The I’m A Celeb star was dressed in a flowy white dress, a leather biker jacket and box-fresh trainers

Amid the former lobbyist’s health battle, the news anchor still appeared in good spirits as she engaged in conversations with her kids and neighbours.

The I’m A Celeb star was dressed in a flowy white dress, a leather biker jacket and box-fresh trainers as she stepped out to support the important cause, which is relatively close to home.

Kate’s mini-me stood beside her as she clapped in support of the NHS, while young Billy joined his relatives on a brick fence.

Kate’s supportive husband Derek was taken into hospital on March 30 and is understood to be in an unresponsive critical condition as he remains in a critical care unit. 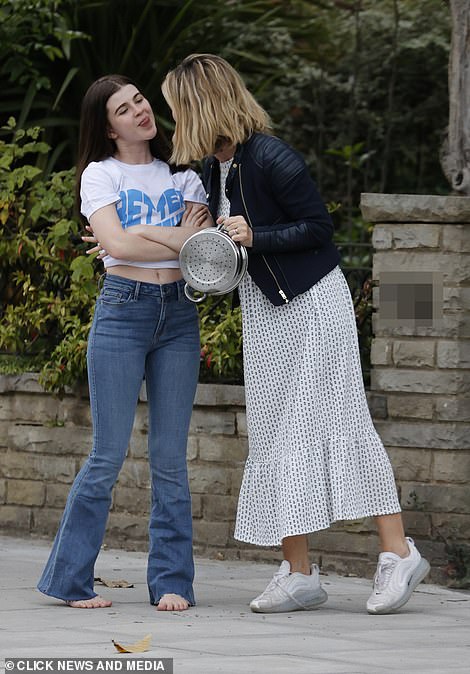 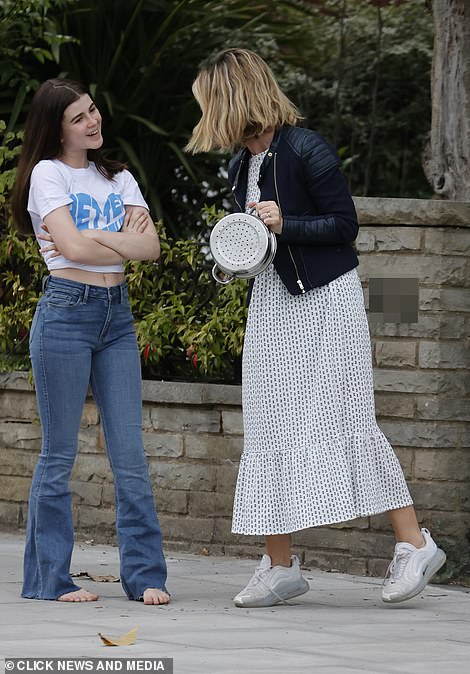 Relaxed: Kate’s eldest child ditched shoes as she went barefoot during her brief appearance in the street 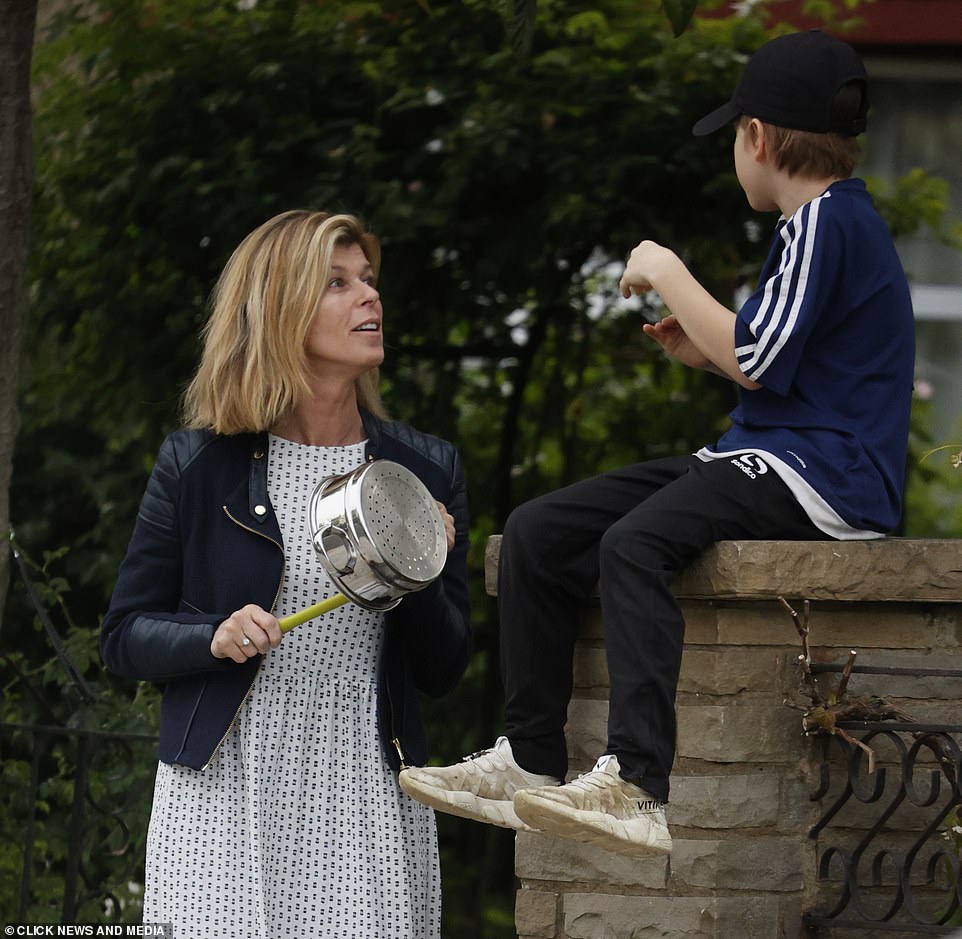 Hopeful: Her GMB colleague Piers Morgan recently revealed Kate has been given ‘huge hope’ as she hears stories from coronavirus survivors 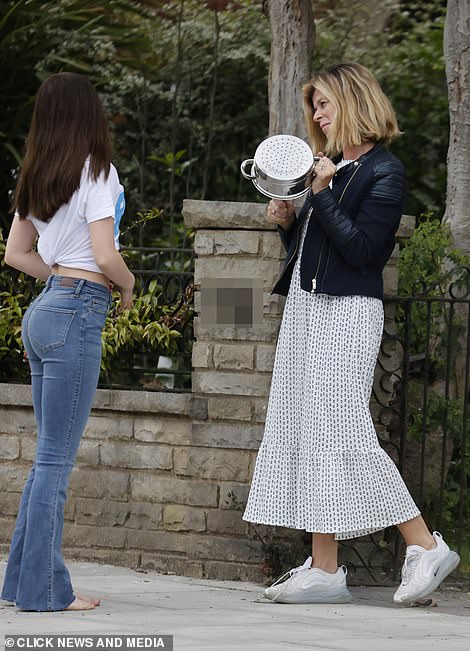 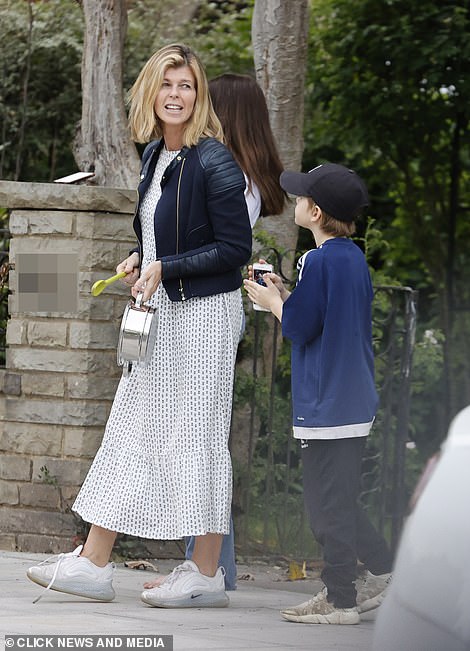 Thank you: For the ninth week in a row, National Health Service workers have been the recipients of the cheers and claps from the nation

Her GMB colleague Piers Morgan revealed Kate has been given ‘huge hope’ as she hears stories from coronavirus survivors.

The lead presenter, 55, spoke about his close friend after hearing from a woman called Jo Tillbrook who survived coronavirus after a long stint in hospital.

He said: ‘One of my colleagues, Kate Garraway, her husband has been very critically ill for a long period of time now.

‘And these sort of stories, I have to say, think give Kate huge hope when she hears and sees them.’

Jo’s husband Clive had been told to ‘prepare for the worst’ by doctors, who were concerned that Jo wouldn’t be able to recover – however she made a full recovery. 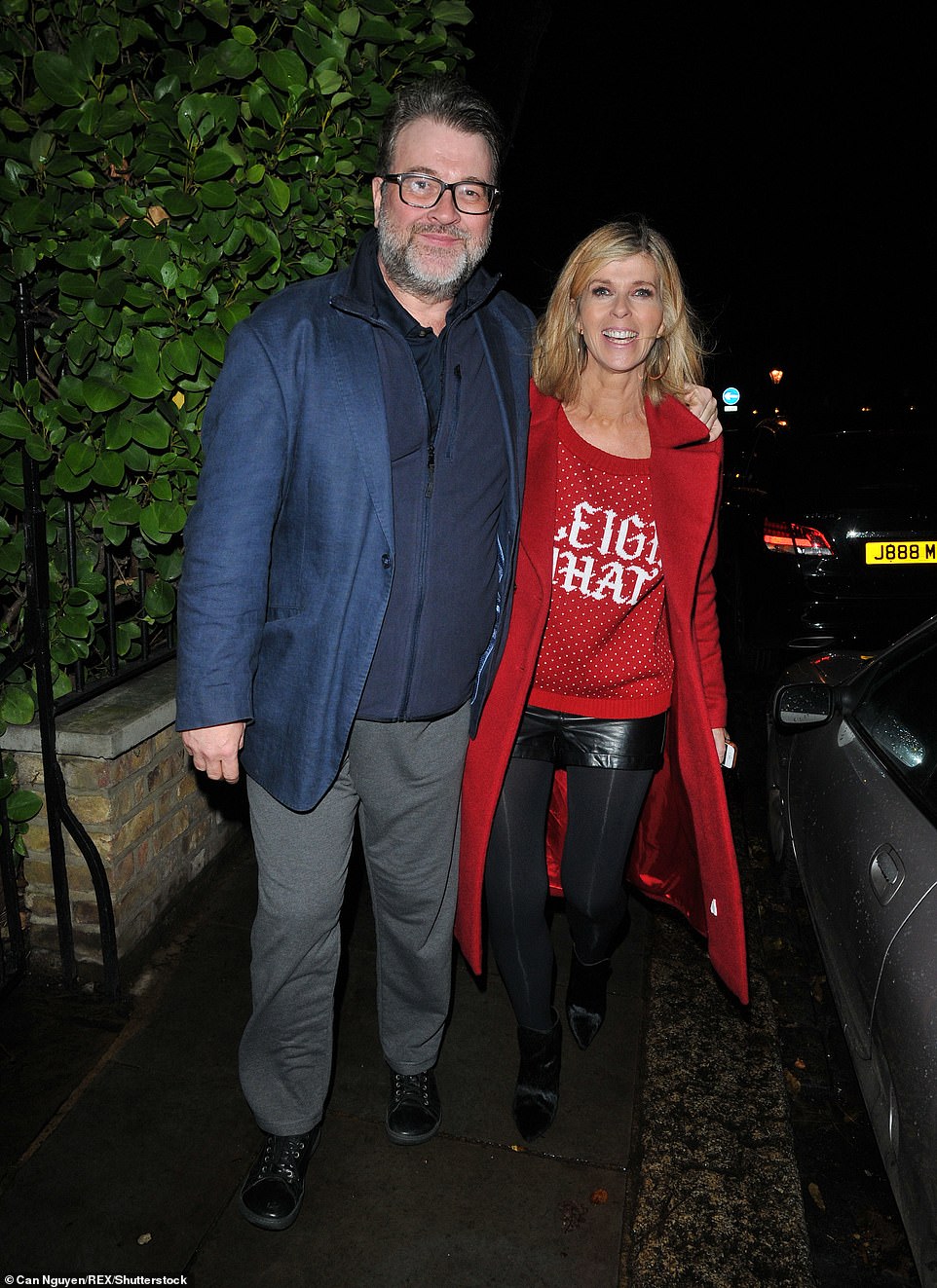 Loved-up: Before the pandemic, the broadcaster revealed the couple were set to renew their vows later this year after 15 years of marriage (pictured in December)

Piers added: ‘She was in the very same position that Clive was in, you can’t see your loved one. You just have to muddle through, I guess.’

On Monday, the journalist acknowledged that Kate is ‘going through a living hell’ as she is unable to visit her sick partner.

Piers said: ‘We haven’t talked about it much because Kate Garraway is going through a living hell like many people. Her husband has been in a very serious condition for many many weeks.

‘We can all just hope and pray he comes through it, but it’s been very, very difficult for Kate and her family. 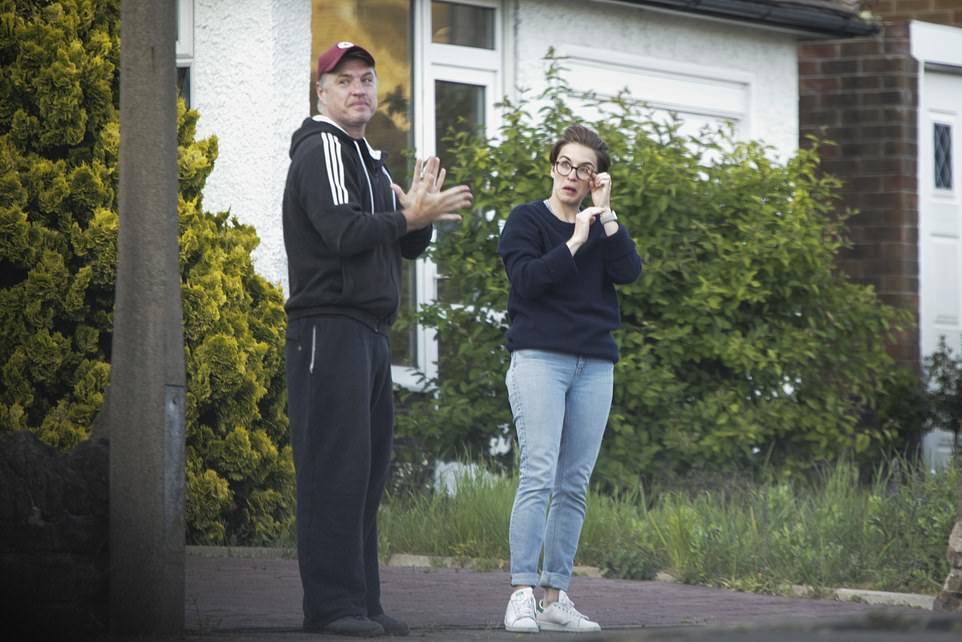 Well done! Vicky McClure was unable to hide her emotions as she wiped away tears while clapping for key workers on her doorstep 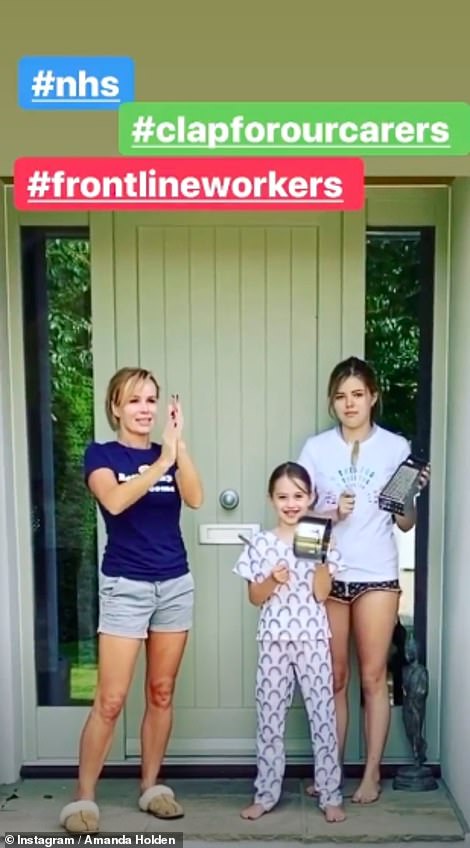 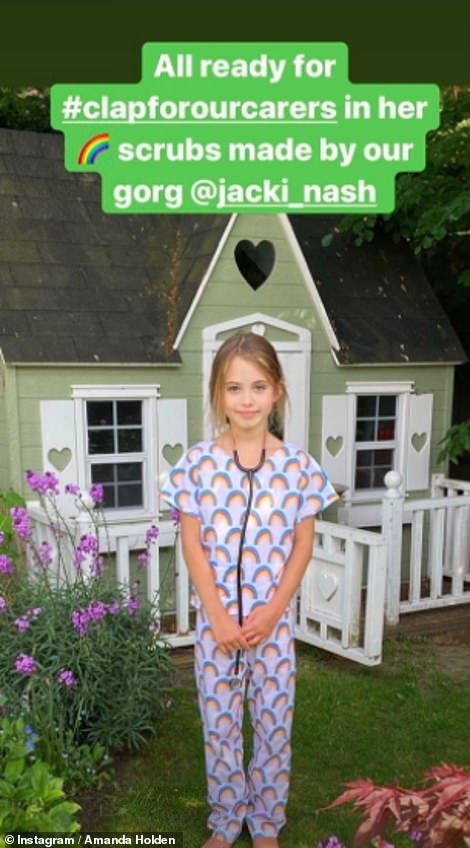 Family affair: BGT judge Amanda Holden, 49, and her daughters Alexa, 14, and Hollie, eight, clapped and banged pans as they joined legions of families across the country

‘We miss her here at the show, but obviously we stay in touch with her a lot. We send her and the kids all our love and we just wish Derek all the very best.’

Susanna Reid added: ‘We haven’t said much, we leave it up to Kate, because she updates fans on Thursdays after the Clap for Carers and then Ben Shephard updates viewers the next day.’

Mother-of-two Kate, who has regularly kept followers updated with Derek’s progress, recently told how the messages of support have ‘meant the world’ to her.

Writing in her latest blog post, she said the kind words were ‘comforting’ as she tries to remain strong for her family. 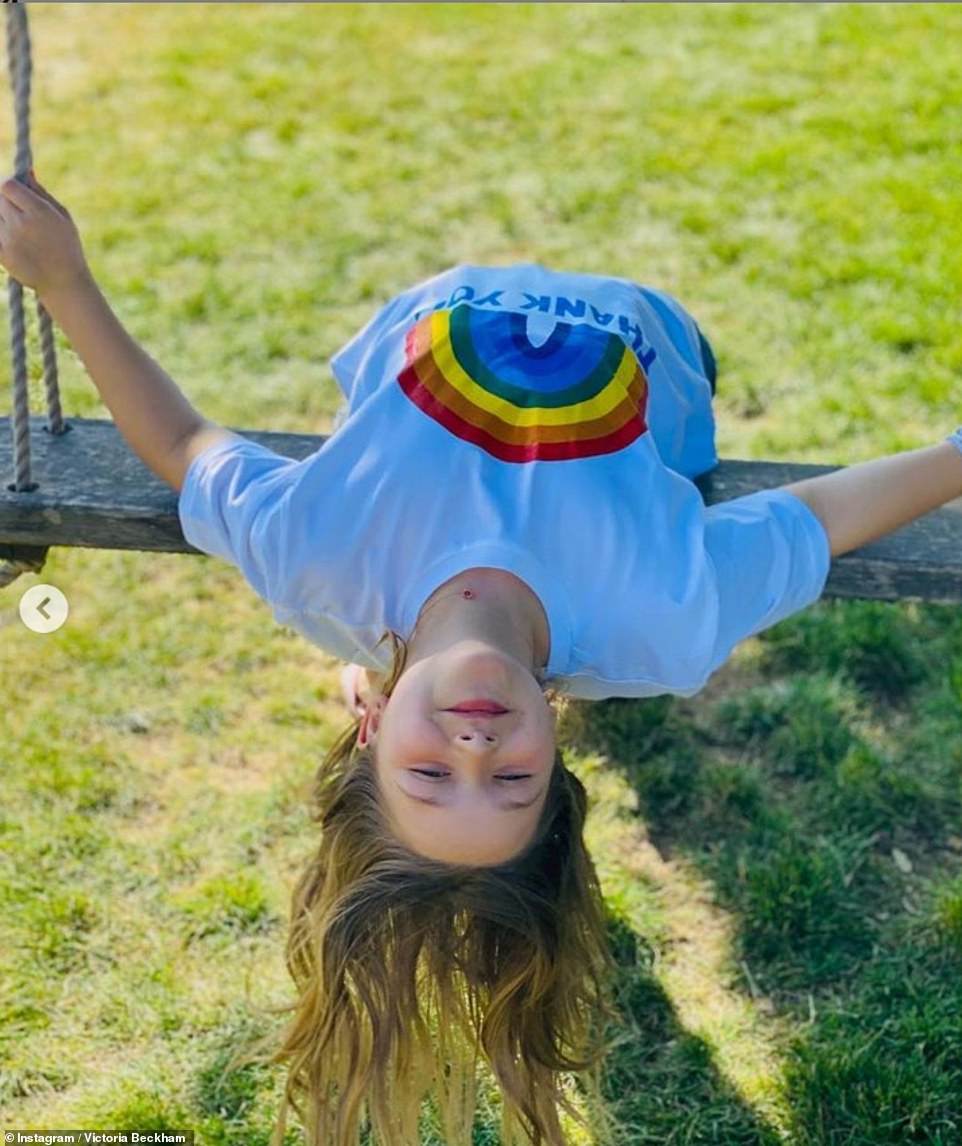 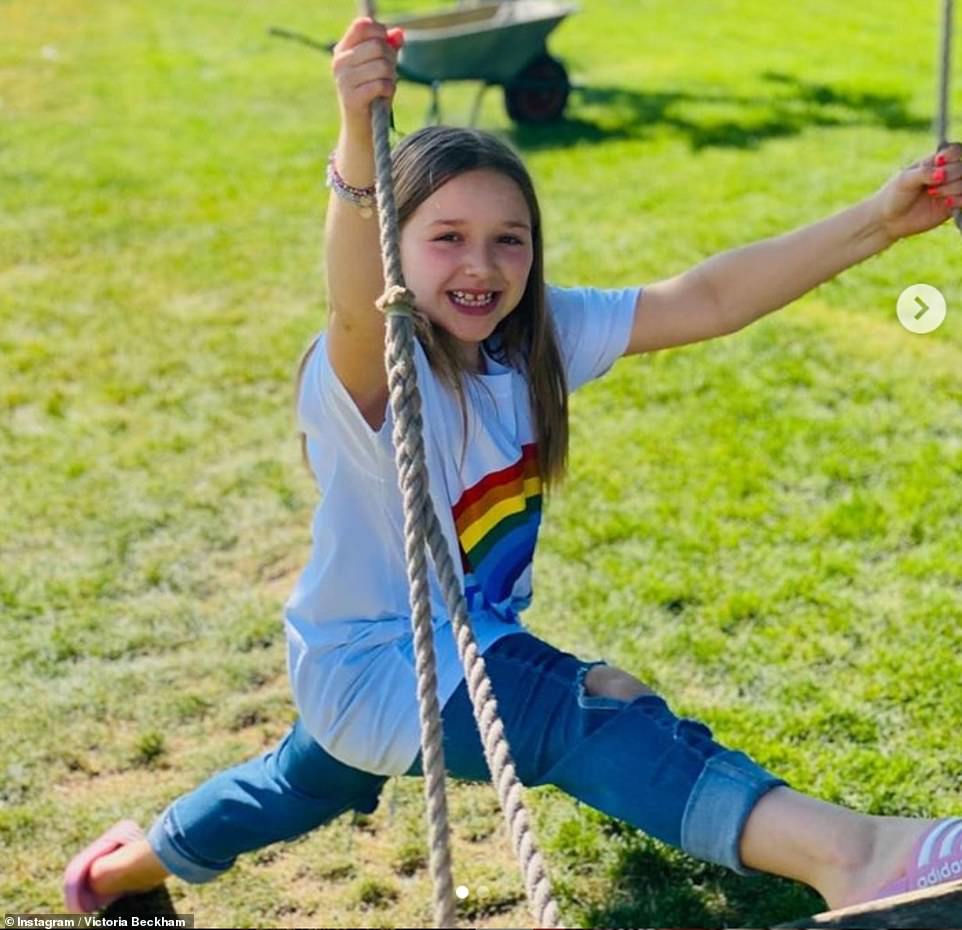 Thank you: Victoria Beckham, 46, and her daughter Harper, eight, who was wearing a ‘thank you’ T-shirt, were also keen to show their appreciation during the weekly clap, with her mini-me enjoying a swing ride

The ITV star said: ‘I wanted to send a huge thank you to all of you who have sent me such wonderful messages wishing Derek well. It has meant the world to me.

‘I am sorry I have not been able to reply to them individually, as I am sure you will understand that I am focusing on my family and Derek right now.’

The blonde continued: ‘In quieter moments I am reading all of your messages and they are so comforting and wonderful to read.’

Before the pandemic, Kate revealed the couple were set to renew their vows later this year after 15 years of marriage. 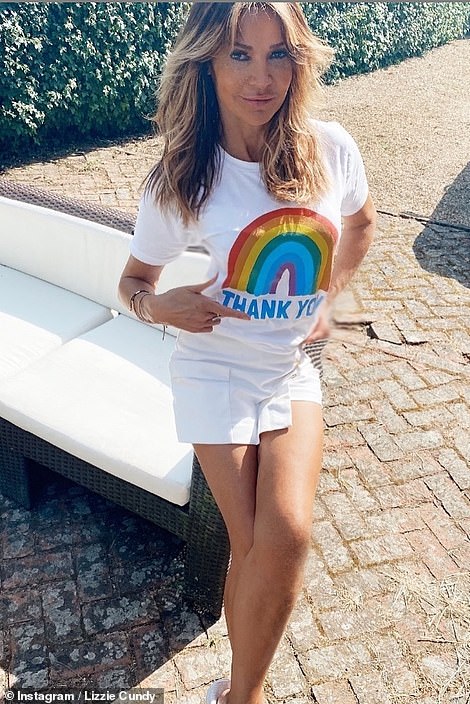 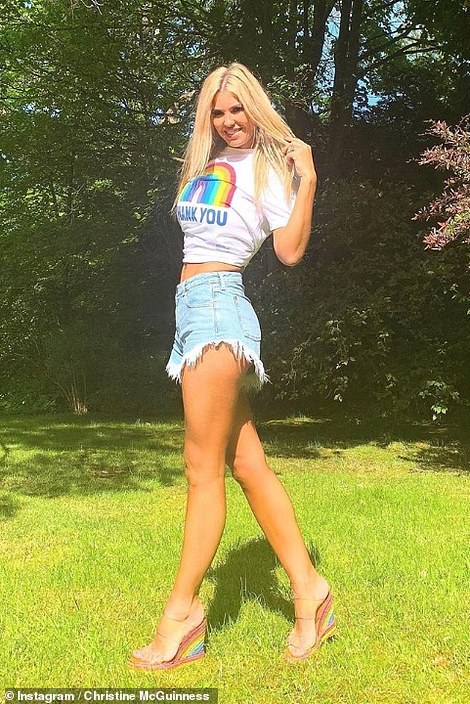 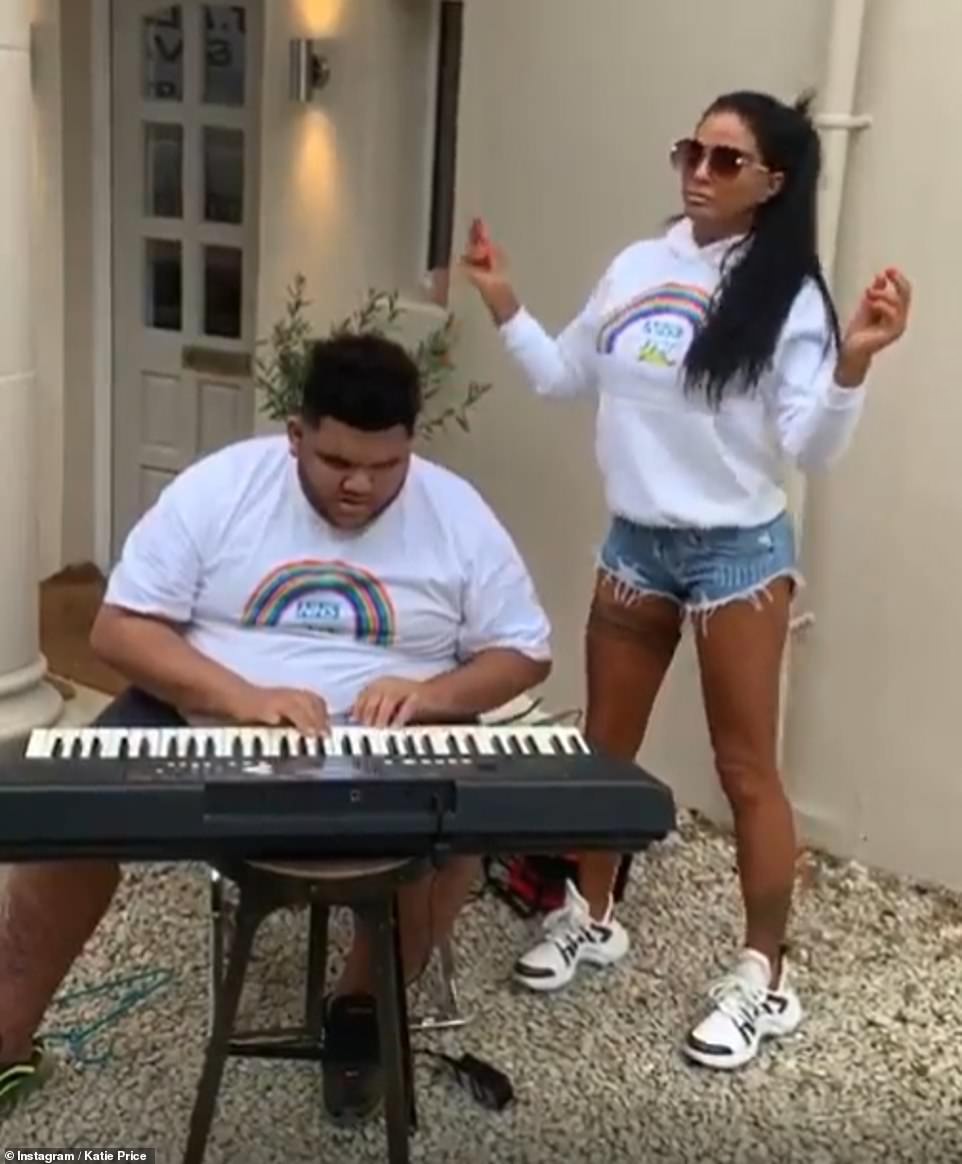 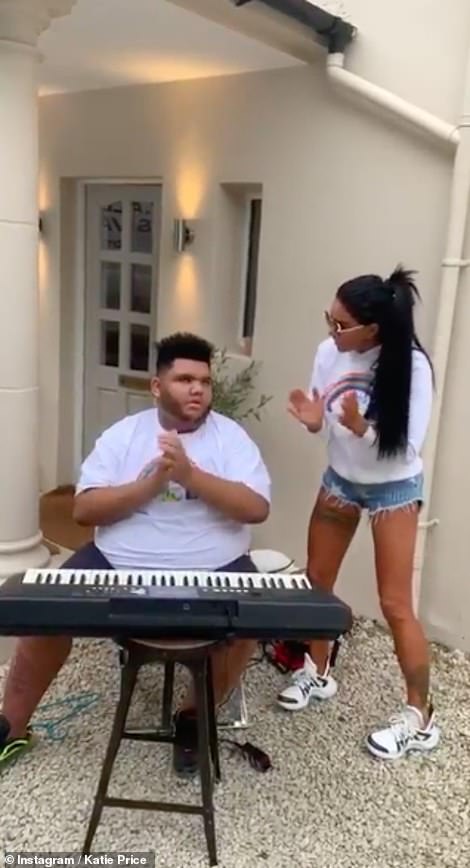 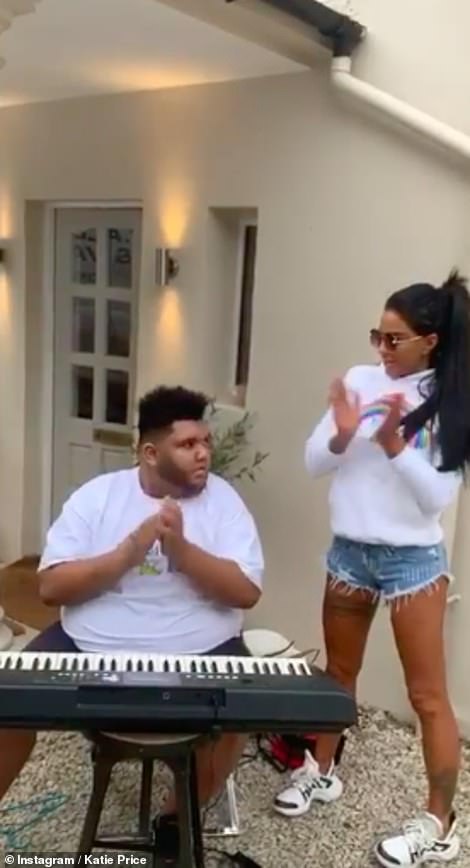 Rainbow love: The mother and son duo were also rocking rainbow T-shirts which had the letters ‘NHS’, emblazoned across the front of the garments, designed by Harvey himself

The broadcaster was stunned when Derek proposed to her for a second time following her appearance on I’m A Celebrity… Get Me Out Of Here!.

Vicky McClure also took part in the public applause, with the actress, 37, left unable to hide her emotions as she wiped away tears.

The screen star followed in the footsteps of a host of celebrities, with Amanda Holden, 49, and her two daughters also showing support from their doorstep.

BGT judge Amanda, 49, and her daughters Alexa, 14, and Hollie, eight, clapped and banged pans as they joined legions of families across the country.

The Heart Radio host showcased her legs in denim hot pants and a T-shirt, while her youngest Hollie was wearing a pair of adorable rainbow scrubs.

The Clap For Carers campaign, which started online, has been staged because ‘during these unprecedented times they need to know we are grateful’, the organisers said.

For the ninth week in a row, National Health Service workers have been the recipients of the cheers and claps from the nation.

Last month the event, organised by the Clap For Our Carers campaign, was expanded to include all key workers, such as supermarket staff, the emergency services and teachers who are continuing to work.