To everyone who is secretly (or not-so-secretly) wishing for Megan Fox and Machine Gun Kelly to get engaged… I’ve got some bad news for you. Megan just gave people who are speculating about her relationship status with boyfriend MGK the middle finger. After she was spotted wearing a rather large ring on that finger, rumors started flying that she and MGK got engaged.

Megan posted a photo of her left hand with a ring that reads “F*CK YOU.” She also included the side-eye emoji, which seems like she’s telling people to mind their own business and that she’s definitely *not* engaged. 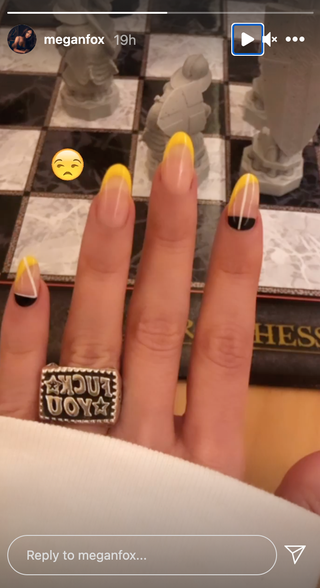 “They are very serious and plan on spending the future together. There will be an engagement at some point, but they are not engaged now,” a source tells People. Megan is in the process of divorcing Brian Austin Green. “Megan needs her divorce to be finalized before she can fully move on. She is very happy though.”

The insider adds, “She is focused on making sure her boys are doing well. Co-parenting has been tricky at times, but everyone is doing better now. Brian has moved on and is happier as well.”

All of this is not to say that Megan and MGK won’t get married at some point. A source recently told Entertainment Tonight that they are a great couple. “MGK and Megan make each other laugh and that’s a big thing for Megan. They keep each other smiling,” the insider said. “MGK totally sees marriage in his future with Megan and friends could 100 percent see them getting engaged within the next year.”

But, the source added, “Megan doesn’t think about getting engaged [or] married and she doesn’t put a timeline in place and it’s not something that really crosses her mind.”

You love all the details on celeb couples. So do we. Let’s overanalyze them together. ✔️