Nick Cannon has been celebrating his daughter’s first birthday with friends and family, weeks after the tragic death of his five-month-old son.

The popular TV presenter, 41, helped throw a major bash for his daughter Powerful Queen on her first birthday, with her mother Brittany Bell organising a Christmas-themed party.

Nick and Brittany have two children together – one-year-old Powerful, and son Golden, four.

The family was dressed to the nines in Christmas gear for the party, with Brittany uploading multiple videos of the celebrations to her 91,000 followers on Instagram.

Nick, beaming as he took part in his daughter’s party, was dressed in a green Santa suit and draped in Christmas lights, with a white wig and sunglasses to finish the look.

Glamorous Brittany, meanwhile, stunned in a red and gold dress, almost looking like the gift-wrapped presents under the tree. 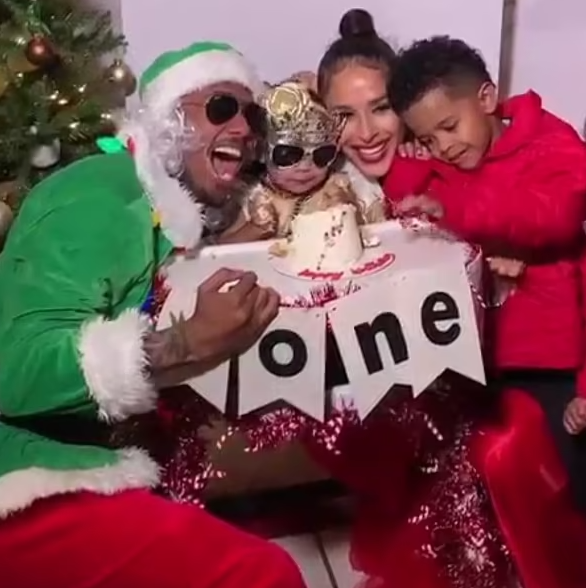 The children matched their mother, with Golden wearing all red, while birthday girl Powerful wore a crown, gold dress and sunglasses as she ate – and played with – her smash cake.

Zen, the TV star’s seventh child, was born to Nick and model Alyssa Scott in June, but at just two months old was diagnosed with an aggressive form of brain cancer.

After a shunt was placed in baby Zen’s brain, the couple decided to not pursue any further invasive treatments.

Instead, they focused on making his remaining time as ‘happy’ as possible as they didn’t want him ‘to suffer’.

Zen died on December 5, with Nick later getting a tattoo in a permanent tribute to his son.