Own the Lizzie Borden Murder House for Just $2 Million

From the moment she took the stand in what was one of the first highly publicized trials in American history, Lizzie Borden has been an object of fascination. Now, her former home — where her father, Andrew, and step-mother, Abby, were murdered in 1892 — is up for sale, along with Maplecroft, the house she and her sister Emma purchased following her trial. An entrepreneur named Donald Woods currently owns both buildings, and according to Suzanne St. John, the real estate agent for both properties, he’s selling them because he’s getting ready to retire.

The house at 230 Second Street was built as a two-family residence in 1845 in Fall River, Massachusetts, then a thriving textile manufacturing hub. When Andrew Borden purchased it in 1872, he combined the upstairs and downstairs apartments into one large home for his family. He lived there until 1892, when he was killed by a hatchet-wielding individual while napping on the sofa in the sitting room. Today, the Greek Revival house doubles as a museum and a bed and breakfast with two suites and four rooms — one of which was the upstairs bedroom where Abby Borden was murdered.

Following Lizzie’s acquittal in 1893, she and Emma used their inheritance to purchase a large Queen Anne-style home in the upper-middle class neighborhood of Fall River known as “The Hill.” The seven-bedroom, 3,935 square-foot house that Lizzie later dubbed “Maplecroft” was recently renovated and is being sold fully furnished with period-appropriate pieces. Maplecroft features six fireplaces, stained glass windows, and carved mantels some believe hold hidden meaning (though it’s unclear whether they were there when she purchased the house, and either way, were mass-produced and likely purchased from a showroom or through a catalogue).

St. John — who also spends one day a week as tour guide at the bed and breakfast/museum — has had Maplecroft listed since last fall. But since the Borden house went on the market earlier this month, interest in Maplecroft — which isn’t currently open to the public — has increased significantly. So far, St. John says that the offers coming in for the bed and breakfast have been close to the $2 million asking price, and that most have been from people from out of town who previously visited the property.

Though the Borden house and Maplecroft don’t necessarily have to be a package deal, St. John hopes one purchaser might acquire both properties. “I think that it would be a good idea for somebody to buy Lizzie’s — the bed and breakfast — and live in Maplecroft,” she says. “But so far, I think people are waiting to see if they can get the bed and breakfast, and then maybe tack on the purchase of Maplecroft afterwards.” Currently, Maplecroft is listed for $890,000.

For Michael Martins, co-author of Parallel Lives: A Social History of Lizzie A. Borden and Her Fall River and the curator of the Fall River Historical Society — which is home to the world’s largest collection of Lizzie Borden-related documents, photographs, and artifacts — the best case scenario would be if the historical society would be able to purchase both houses, but he says that this would be impossible on their current budget. “In as much as it would be a perfect fit for our museum to hold those properties, financially, it’s just not possible,” he tells Rolling Stone. “So my best hope is that whoever takes over the properties eventually will hopefully be sympathetic to the story and the needs of the properties.”

Unlike the Borden house, Maplecroft is being sold as a private residence, not as a business. This means that while the buyers could eventually open it up as a bed and breakfast too, they would be responsible for going through the legal process to make that happen — something St. John says would likely take about a year.

The Lizzie Borden Bed & Breakfast/Museum comes almost fully furnished — complete with period pieces and decor, as well as artifacts related to the Borden family and the murders. (The only things that don’t come with the house are a few hurricane lamps and some pictures, St. John says, which belong to the proprietor of the inn.) The sale also comes with “intellectual property,” which St. John says primarily refers to several Lizzie Borden websites with approximately 60 different web domains. It also includes the trademark and name “Lizzie Borden” as it pertains to the bed and breakfast and museum.

According to St. John, Woods’ decision to sell the properties is based solely on his plans to retire — not because of any Covid-related slowdown in business. In fact, she says, they are faring better than most bed and breakfasts right now. After being closed for four months, they’re back to doing tours, as well. “It’s one of the top tourist destinations in New England. People know about Lizzie Borden all around the world and want to come here because they’re interested in the unsolved murder,” St. John says. “It’s not a regular bed and breakfast — it’s a niche; it’s history.”

But some believe that not all visitors to the house buy a ticket — including the multiple ghost hunting shows that claim to have detected other presences on the property. In fact, St. John has had some experiences of her own. “I don’t go looking for it — I’ll put it that way. But I have definitely had things happen.” 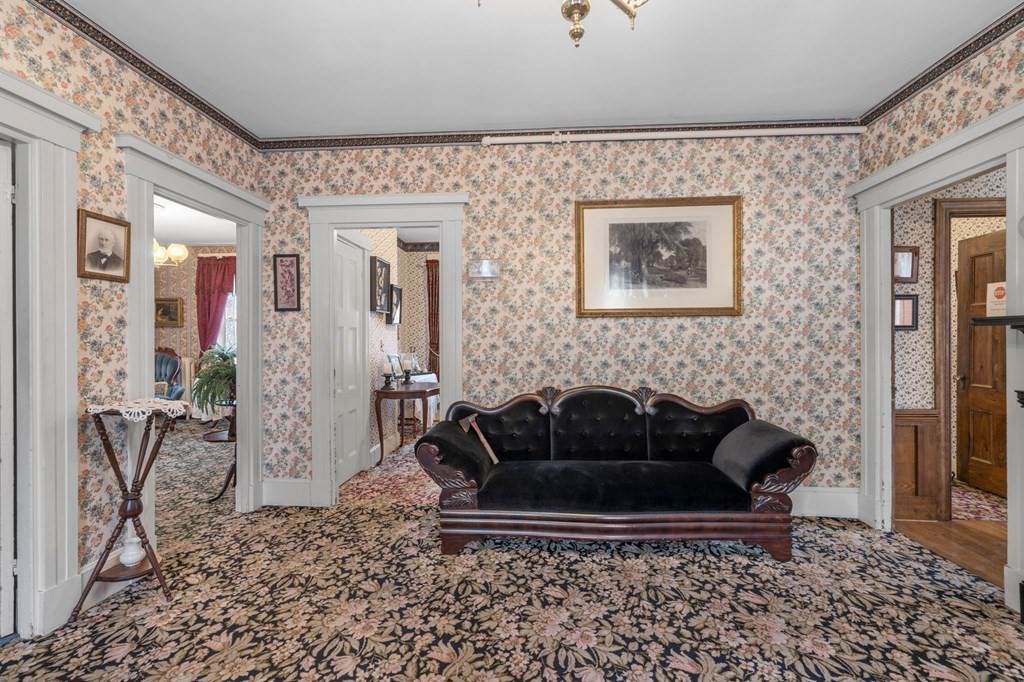 The sitting room in the Second St. house, where Andrew Borden was killed.

One of the instances occurred a couple of years ago, during the week of the annual reenactment of the August 4th murders. St. John was portraying Bridget Sullivan — the Bordens’ live-in Irish maid who was initially suspected of committing the crimes, given that she was in the house the day they took place. “All of a sudden, I got a pain in my eye, and it starts watering and watering, and I’m like ‘what the heck is going on?’ ” St. John says. Once it stopped, she wiped her eye, and finished the tour. “I didn’t think anything of it,” she adds. Some of the other actors were staying at the bed and breakfast, and two of them later described being poked in the eye by an unknown force during their visit. “And that’s when I realized what it was: I got poked in the eye,” St. John explains. “I’ve had several experiences like that. It just happens. I don’t freak out about it.”

And it’s not just St. John and other reenactors: there is no shortage of similar accounts from overnight guests at the bed and breakfast who report unusual happenings during their stay. But occurrences like these haven’t deterred visitors or, it appears, potential buyers. “It’s an amazing opportunity,” St. John says. “I mean, when do you ever have the chance to buy history? You are buying the history, and able to corner the whole market on that.”

Meanwhile, Martins says that to his knowledge, there is no historical precedent for paranormal activities in either house. “I’ve often heard from — or know —  families who have lived in these properties in the past,” he says. “They never experienced many of the things that have been experienced now.”

Still, he regularly receives requests from paranormal investigators and documentary crews regarding the alleged paranormal activity in the Borden house, but says that the historical society takes a purely academic approach to Lizzie’s trial, as well as her life before and after her father and step-mother were murdered. “That’s not something that we get involved in at all here, simply because we don’t have anything that would lend to what it is that they’re doing,” he explains.

Regardless of who ends up with the house on Second Street — and who they believe is responsible for killing Andrew and Abby Borden — Martins hopes that they will keep the actual, documented events on August 4th, 1892 in mind. “People often forget that two people were brutally murdered, and [at the historical society] we try to be sympathetic to that, and not sensationalize it in any way,” he says. “There’s a tremendous amount of interest in the Borden case, but I don’t think it’s going to become a Lizzie Borden Disneyland — nor should it.”