Home » Celebrities » Piers Morgan Has Another Message For Meghan And Harry

Piers Morgan Has Another Message For Meghan And Harry

In 2021, Piers Morgan has not shied away from letting his feelings about Meghan Markle and Prince Harry be known. In fact, he even lost his longtime job over his controversial and very insensitive comments about the duchess’ struggles with her mental health. Though Morgan appeared to be a fan of Meghan when she and Harry first started dating in 2016, per Hello!, their unlikely friendship changed after the royal couple announced their engagement.

“I didn’t hear from Meghan again after her royal romance erupted into the public gaze, which is perfectly understandable under the circumstances,” he said in his column for the Daily Mail. “All will be forgiven though if I get an invite to the wedding of the year.” He never got an invitation.

Then, after Harry and Meghan announced they were stepping down as members of the royal family, the former morning news host has made his stance even clearer: He’s not a fan. Interestingly enough, Morgan’s vendetta against the royals is a “one-sided TV feud” as his “relentless negative commentary” has all gone unanswered, according to Vanity Fair. Unfortunately, Meghan’s silence has not stopped the TV host from sharing his opinions — and he’s also taken issue with the Duke and Duchess of Sussex’s demand for privacy even though they’ve signed deals with Netflix and Spotify.

Keep scrolling to find out what Morgan had to say now, including why he thinks people are tired of hearing Meghan and Harry complain.

Piers Morgan wants Meghan and Harry to 'pipe down' 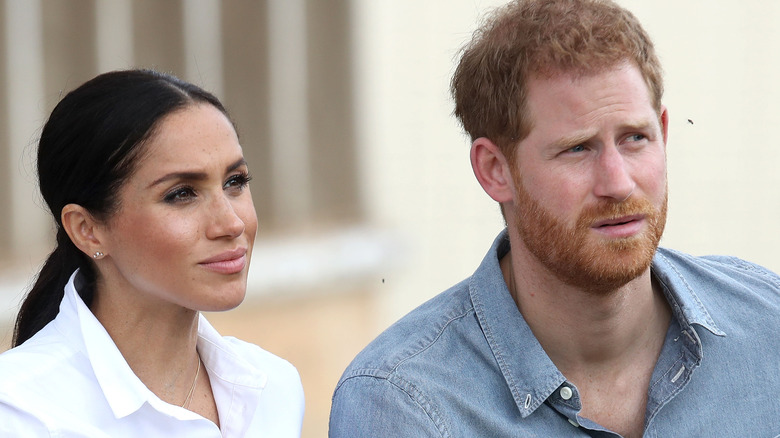 Piers Morgan voiced his opinions about Meghan Markle and Prince Harry once again when he appeared on “Hannity” on Fox News on June 14. During his interview, he criticized the Duke and Duchess of Sussex’s hypocrisy and called them out for wanting to “have the royal cake and eat it” too. Morgan told host Sean Hannity (per the Daily Mail), “I think it’s time those two gave up their titles, stopped whining 24/7, and tried to take a leaf out the book of the queen.”

The former “Good Morning Britain” co-host also had some advice for the couple. “Take a little tip from the queen: less is more,” Morgan said. “And if you want to be a royal, a member of the royal family, less is more. We are hearing too much of your yapping, too much of your whining, it’s time to pipe down.” Morgan continued, “They are very happy to trade off their titles, but at the same time they want the right to trash the Queen. I think it’s sickening to people here.”

Piers went on to say that, unlike Queen Elizabeth II, Harry and Meghan don’t understand “the concept of duty.”