SEBASTIAN SHAKESPEARE: Tom Daley takes up KNITTING to ease the boredom of lockdown… but it’s sending his husband off the deep end!

Tom Daley’s husband goes off the deep end about his knitting!

Olympic diver Tom Daley’s new knitting hobby, which he has taken up to keep him occupied during self-isolation, is not going down too well with his husband, film producer Dustin Lance Black.

‘Why am I the one who at night is going to bed, looking forward to sleep, and I’m sitting next to Tom, who’s knitting?’ he asks. ‘I literally am married to a grandmother.’ The 45-year-old, who married Tom, 25, three years ago, adds: ‘Relationships are work as it is. Quarantine makes the work harder. Learn how to tune your loved one out. Stop listening.

‘In fact, sometimes get ear plugs and just put them in your ears. Flesh coloured, so they don’t know they’re in there, and nod a lot.’ 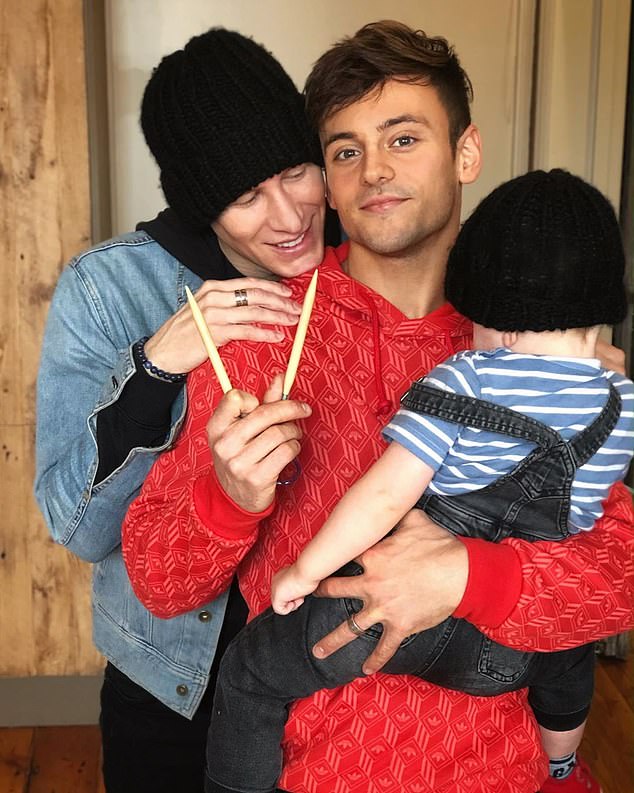 Stripe me pink (and orange and blue): Salma’s rainbow tribute

The 53-year-old painted her face with multicoloured stripes this week after being inspired by support in Britain for the NHS.

‘I painted this rainbow on my face because many people are using rainbows to symbolise unity and hope and to thank the NHS and all the health workers around the world for their courage and endurance,’ she says. 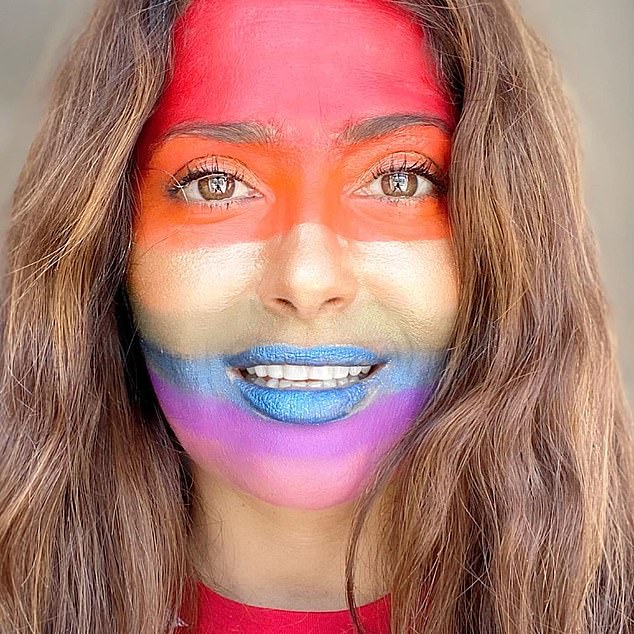 Hollywood star Salma Hayek, 53, painted her face with multicoloured stripes this week after being inspired by support in Britain for the NHS

Toff uses her head to raise cash for carers

Forced to cancel her hols with pal Stanley Johnson, ebullient Georgia Toffolo is getting adventurous at home instead.

The winner of I’m A Celebrity, who was set to go to Uganda with the PM’s pater, tried her first headstand as part of the ‘upside-down challenge’.

‘It’s for a really amazing charity called Mask Our Heroes. It’s about giving essential workers PPE,’ she explains, posting a video online in which she topples over before completing the task. She may be disappointed, though, after publicly asking Stanley to record his own attempt. He tells me: ‘I’m not up for a headstand though quite happy to be nominated.’ 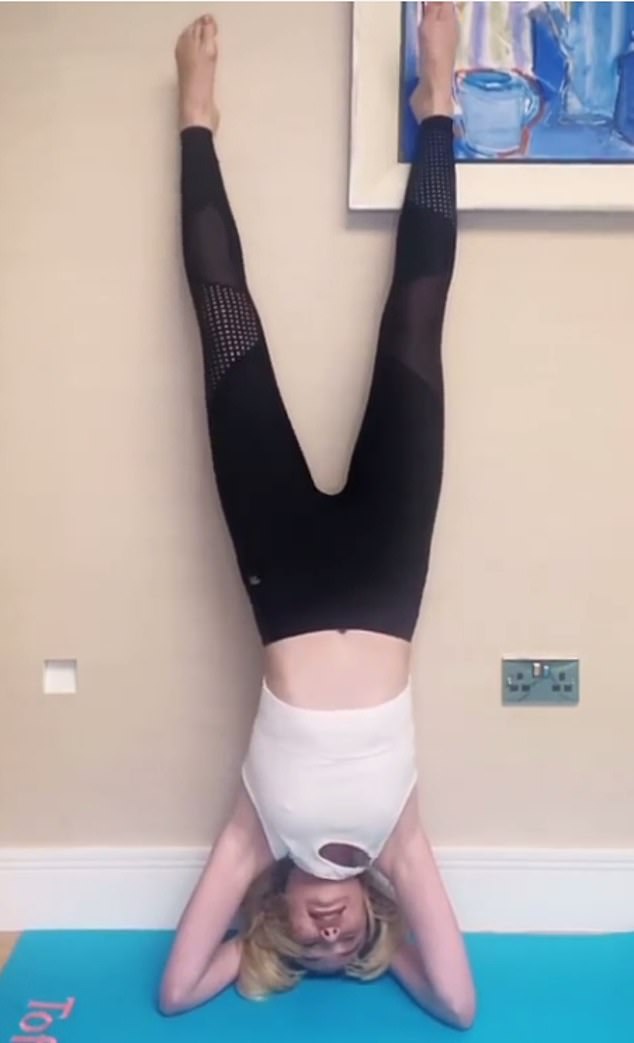 Georgia Toffolo, 25, tried her first headstand as part of the ‘upside-down challenge’ after her planned trip to Uganda was cancelled 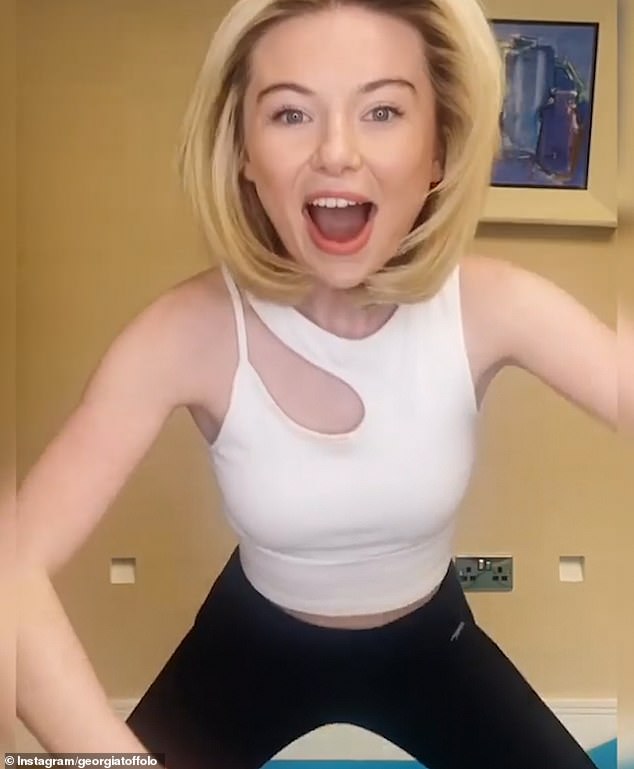 Drama isn’t confined to the pages of a novel as writer Kathy Lette discovered when copies of her latest offering were stolen.

‘I’d just taken delivery of a box of books of my latest comic novel,’ she tells me. ‘I was driving around to pop a few through the letterboxes of pals. But first I stopped at Hampstead Heath and while I was taking a jog, robbers smashed my window and stole the box.’

Kathy adds: ‘Imagine their disappointment when they got home and discovered 20 copies of HRT — Husband Replacement Therapy.

‘When they get arrested and sent to prison, at least I can say I have a captive audience.’

Despite living in the spotlight, model-turned-actress Poppy Delevingne reveals she gets so nervous in public she nearly falls over.

‘If I have to do red carpet or anything like that, my whole body shakes uncontrollably,’ says the 33-year-old, who is married to businessman James Cook. ‘My husband always says, “I literally have to hold Poppy up.” My whole body is practically convulsing because I’m petrified. I get a lip twitch from total fear. And it doesn’t get any better with age, it just gets worse.’

The star of Sky drama Riviera adds she’s learned to control it at work. ‘When I’ve got a scene I’ve worked really hard on and I know it to death then it’s just the most exciting feeling in the world.’

Poppy Delevingne, 33, (pictured) revealed she gets so nervous in public she nearly falls over

The stars of Bafta-winning BBC3 comedy This Country, who recently claimed to be broke, paid themselves more than £170,000 last year. Daisy May Cooper and her brother Charlie Cooper said they were ‘absolutely skint’. But records for the programme’s stars’ companies show Daisy May paid herself £122,000 last year and Charlie took £51,700. Creative licence?

He is worth £5.6 bn, but Giorgio Armani regrets making personal sacrifices for his career.

‘Over the course of my life, I have sacrificed love, private life, and time for me, all on the altar of work,’ says the 85-year-old. ‘But I have also created an empire. Although, the older I get, the more I feel regret for things I have not done, places I have not seen, loves I have not cherished.’ Gives fashion victim a whole new twist… 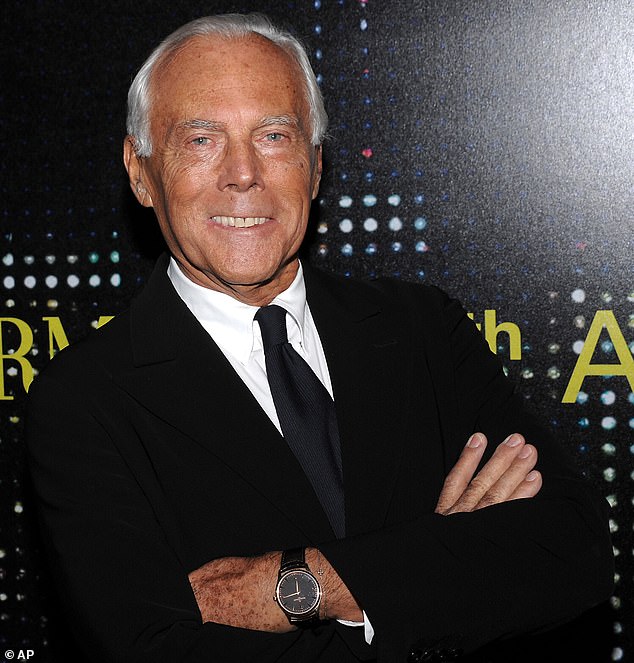 85-year-old Giorgio Armani may be worth £5.6billion but he says he regrets making personal sacrifices for his career

There is an upside to the coronavirus crisis, for A-listers at least. Apollo 13 star Kevin Bacon, who is married to actress Kyra Sedgwick, remarks: ‘We were taking a walk the other day, and Kyra says to me, “Hey, have you noticed that nobody stops you for selfies any more?” and I said, “Yeah, that’s social distancing”.’ Not that Bacon usually welcomes them anyway: ‘My kids and wife will tell me that I have this kind of built-in social distancing on my face.’