Home » Celebrities » Why Was The Queen Embarrassed At The G7 Summit?

Why Was The Queen Embarrassed At The G7 Summit?

There’s one thing you don’t want to do when you meet Queen Elizabeth II, and that is to make her blush. Sadly for Australian Prime Minister Scott Morrison, that’s exactly what he did when he met with the queen at Windsor Castle days after the G7 Summit in Cornwall the previous weekend.

The queen showed up for a luncheon and evening gathering for the Eden Project, which coincided with the G7 summit. There, she met with the likes of Angela Merkel, Ursula von der Leyen, Emmanuel Macron, Justin Trudeau, Joe Biden, and Boris Johnson, among others, and had everyone in stitches when she joked, per The Standard, as they posed for a pic. “Are you supposed to be looking as if you’re enjoying yourself?” the queen quipped.

She also cut a cake with a ceremonial sword earlier in the day — all in all, it seems like it was a decent get-together, whether she had to pose for too many photos or not. So why was she embarrassed days later? Read on to find out. 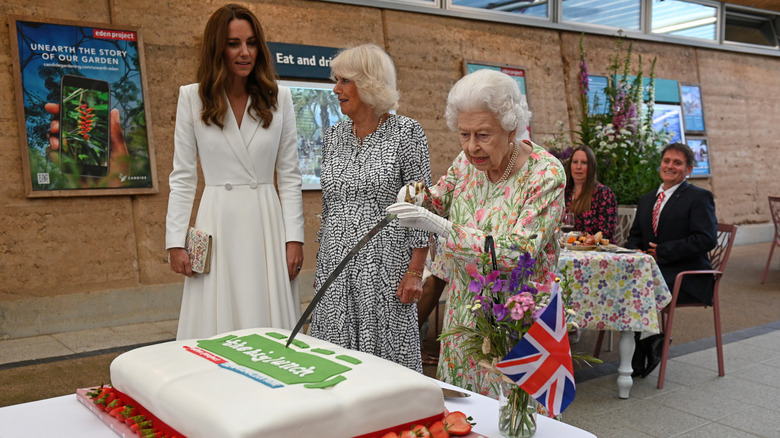 Given that she was the life of the party at the G7 Summit, Australian Prime Minister Scott Morrison felt the need to inform Queen Elizabeth II that at dinner the night after the Eden Project meetings, she was the topic of conversation.

First, the queen asked why he wasn’t at the event in Cornwall and he responded by reminding her that Australia isn’t part of the G7. “No, that was just the G7, Your Majesty. We were sort of an extension party, as they call them,” Morrison said (via Daily Mail). This made the queen laugh, and Morrison went even further, noting, “You were quite the hit, everyone was talking about you at dinner the next night.”

This apparently embarrassed Elizabeth, and she responded simply, “Oh Lord, were they really?” The prime minister went even farther, adding, “They were, they were thrilled to see you.”

And can you blame them? If you got to crack jokes with Queen Elizabeth and watch her cut a cake with a sword, you’d surely want to gossip about it, too.