5 things to know about Guy Fieri

Colorful restaurateur and television personality Guy Fieri is one of Food Network's biggest stars, as well as the mogul of his own food empire and self-proclaimed "Mayor of Flavortown."

HOW MUCH IS GOYA FOODS AND CEO ROBERT UNANUE WORTH?

Celebrity Net Worth estimates Fieri's fortune at $25 million. He owns restaurants that dot the U.S. from Las Vegas to Atlantic City and is the author of several best-selling cookbooks, starting with the companion cookbook to his popular show "Diners, Drive-Ins and Dives" that was published in 2008. 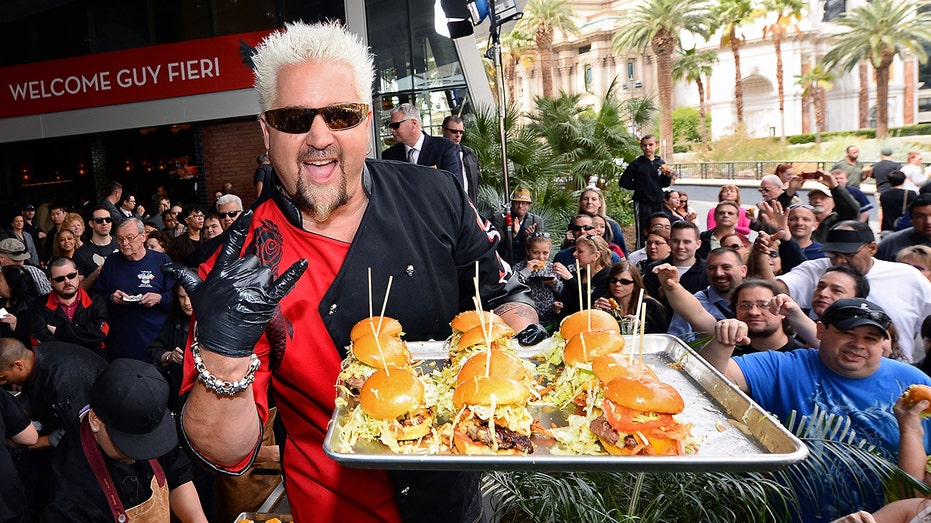 Chef and television personality Guy Fieri poses as he serves hamburgers to guests during a welcome event for Guy Fieri’s Vegas Kitchen & Bar at The Quad Resort & Casino on April 4, 2014 in Las Vegas, Nevada. (Photo by Ethan Miller/Getty Image

His other Food Network shows include "Guy's Big Bite" and "Guy's Grocery Games."

Here are five things that Fieri fans may not know:

1. He’s focused on giving back because of the pandemic.

Fieri partnered with the National Restaurant Association Educational fund to raise more than $22 million for a restaurant employee relief fund amid the coronavirus pandemic, Business Insider reported in May.

The pandemic has affected Fieri's restaurants, too. His new restaurant in Durant, Oklahoma, was reportedly forced to close in July because of coronavirus concerns days after openings.

2. He was born Guy Ramsey Ferry.

Fieri abandoned the anglicized version of his family name when married his wife Lori in 1995, according to Biography.com. His grandfather had chosen to switch the family name to "Ferry" when he emigrated from Italy.

WHO IS DYLAN LAUREN?

3. He has described his parents as hippies.

“My parents were all into macrobiotic cooking and natural cooking, and my sister was a vegetarian. I wasn’t down with that,” Fieri said according to Food Network.

He's still a fan of veggies, however, especially kale.

"I love kale," Fieri said according to Food Network. "I think kale is a vegetable that eats like a protein. It’s hearty. You can eat it raw, chopped in a salad, you can eat it cooked, wilted and beat up like a collard green. … It’s super-fortifying and very healthy for you."

4. He started out selling pretzels.

With the help of his dad, 10-year-old Fieri started The Awesome Pretzel Company selling soft pretzels at fairs and other events.

Fieri has two sons, Hunter and Ryder. Eldest son Hunter Fieri loves to cook and, like his dad, is a University of Nevada Las Vegas alum.

"Hunter cooks a lot; he gets into it,” Fieri said according to Food Network. “And he really likes to bake. … I can’t bake anything. I’m the worst. My cakes always come out flat.”