There’s something in the air, aside from Omicron. Everywhere you look, from roadside bouquets to Disney movies, new words are popping up. Perhaps we can blame the whole shituation (as reader Gae Robinson coins this modern epoch), though Richard Morrow prefers pandemiconium, a blend of chaos and COVID.

Either way, new words are proliferating, words such as Encanto, the latest Disney animation. Pure Spanish, the word means charm. Puerto Rico, in fact, is nicknamed Isla del Encanto, the island of enchantment. Magic realism, a Latin mania, is fuelled on encanto, the genre observing the same sorcerous twists the Disney cartoon upkeeps. 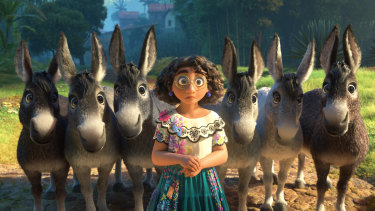 Animated film Encanto has been a hit with subscribers of Disney’s streaming service.Credit:Disney

On a sadder note, a Spanish term applies to every roadside marker you pass along the highway. Whether it’s a cast-iron cross or a drab posy drooping in the weather, the site is slowly adopting the label of descanso – Spanish for interval.

Think interval, as in pause, a moment to recognise a journey disrupted. While safety slogans tell us to Stop, Revive, Survive, the roadside descanso is a mute reminder to Stop, Reflect, Respect – or decelerate at least. Its origins stem from the Rio Grande, the badlands still awaiting Trump’s encantada wall.

Still on pizzas, should a cook visit a kindie, coaching toddlers how to spin dough, then that’s an incursion, according to the paperwork. Ditto should the kids call by the property’s veggie garden, as James Joseph noted in a November email. “Incursion sounds like a military assault,” he wrote, seeking a better label. Jane Stevenson came to the rescue. As lockdown months etched staycation into our psyche, Jane suggested an internal visit should be a staycursion.

Venturing into the TV room, Rod Temple posed a neologism puzzle. The Cambridge humorist is the maestro behind Very British Problems, the Twitter scroll boasting almost 4 million followers. When not lamenting lukewarm tea, the account ponders life’s big questions, like: “There should be a word for the feeling of completing a big TV show, when you sadly say, ‘We’ll have to find something else to watch now.’ Any suggestions?” Plenty came. These included celluvoid and endmotional, re-Morse and west whinge, empTV and showcrastination. Though the outright winner was telencholy.

Staying home, Leigh Rayner insisted we needed “a collective noun for those recyclable shopping bags that accumulate in the boot or body of a car”. Ex-journo Miranda Murphy filed an early gem in baggregation. Yet more wonders were quick to ensue, namely totesam and rat-king, embaggerance and conscience, bagalanche and Nonna Lyn’s green mile. Though the crowd favourite was coined by Karl Quinn, Spectrum’s own entertainment scribe: “If, like me, you stuff one inside another, ad infinitum, maybe a bagushka.”

Lastly came the matter of ex-lovers – what should be their collective tag? Again the neologisms amassed. Take your pick amid riddance and ambivalence, a why of exes, an awkwardness, a sexit, a bittersuite, an ashpit of old flames, a rebound, a remembrance. Yet the popular vote fell to Jess Rudd, aptly the daughter of an ex-PM: “An axis of exes. Or perhaps an excess of exes, depending on your productivity levels.”

Or an excess of neologisms, as the world endures a furious spell of word-forging.