Home » Lifestyle » A lecture, a textbook, an illness like no other: Inside a Melbourne COVID cluster

A lecture, a textbook, an illness like no other: Inside a Melbourne COVID cluster

A small lecture of 12 people – and a single mathematics textbook – may have been all it took to kick off a COVID-19 cluster at the University of Melbourne.

A mathematician from Britain handed the textbook to Tony Guttmann, who leafed through it and handed it back. The mathematician did not cough or sneeze, and there was no sign he was carrying the virus. 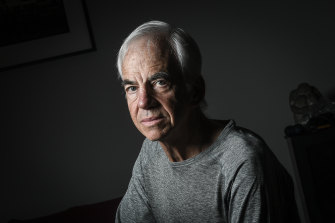 Within hours, the visiting academic had fallen sick. Within days, Professor Guttmann had also become ill, as had another academic the British mathematician met with. One of the men later infected his wife.

“I’m just kicking myself that I did not wash my hands afterwards,” Professor Guttmann said. “It just did not occur to me.”

The cluster of at least three infections potentially kicked off by a person with no obvious signs he was sick shows just how easily SARS-CoV-2 spreads – and how each infection can radiate outwards, like ripples across a lake.

A diary of the events, kept by Professor Guttmann, records how each infected person had radically different experiences.

The mathematician, despite being in his 60s, is still struggling with dizziness and fatigue more than a month after testing positive.

Professor Guttmann spent a long and fruitful career as one of Australia’s top mathematicians, and is now enjoying an active semi-retirement. He exercises for two hours a day, takes no medication, and had made plans to run the 42 kilometre Boston Marathon in April to celebrate his 75th birthday. 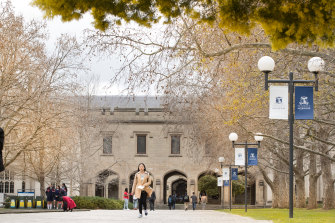 He keeps his mind just as fit. On March 17, a Tuesday, he went to a lecture at the University of Melbourne’s Parkville campus given by a visiting mathematician from the UK.

Unbeknown to anyone in the 12-person lecture, the mathematician (who Professor Guttmann declined to name, along with anyone else in the cluster, citing privacy concerns) had contracted COVID-19 and was infectious.

“It is likely he contracted it at the hotel when [he flew in]. All the dates fit. Or it could be the taxi driver who drove him to the hotel – who confessed he was worried because he’d recently carried a passenger who had turned out to be positive,” said Professor Guttmann.

The mathematician had no symptoms. This may not be unusual. A study published on Thursday in Nature looking at 77 transmissions in China found 44 per cent occurred before the infected person showed symptoms.

The study suggested that a person was most infectious just before they started showing symptoms.

The mathematician who is thought to have infected Professor Guttmann developed symptoms just hours after the lecture finished.

That infection was carried, Professor Guttmann believes, on a mathematics textbook. It had a shiny cover, he remembered. “They say the virus sticks on shiny surfaces,” he said. “And I handled it, opening pages, reading it. I’m certain that was where I picked it up, because I had no other contact with him.”

After the lecture, the mathematician went to another university building, where he met with a third academic who works at the university. The pair sat on opposite sides of a table and chatted for about an hour. Somehow during that time – neither man recalls physical contact – the virus jumped.

That night, Professor Guttmann received a call from the mathematician. He was unwell and had a slight temperature. The next day he went for a test; 24 hours after that, he was told the results were positive.

A virus unlike others

The lecture happened on a Tuesday, the positive test on a Thursday. The university closed the two buildings, conducted a deep disinfection and along with the state government’s contact tracing team, started researching the mathematician’s contacts.

“All identified University of Melbourne close contacts relating to this case were contacted and have undergone self-isolation at home,” the university said in a statement.

On the Friday morning, Professor Guttmann was feeling fine. He ran 11.5 kilometres before breakfast, played table tennis with his wife at lunchtime, and went for an afternoon stroll by the seaside. 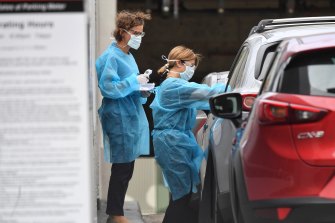 About 7pm, he started to feel “a little seedy”. His temperature increased to 37 and continued to rise, eventually peaking at 38.5 at midnight. The next day he went for a test and 24 hours later was told it was positive

By that time, Professor Guttmann was in the grip of the virus.

“I’ve never experienced anything like the fatigue. I’ve had higher fevers but the fatigue was utterly overwhelming even before I was fully taken up with it,” he said. “I’d get up, walk to the toilet and then have to sleep for an hour and a half.”

“I had no interest in reading, very little in eating, and just wanted to be left alone to sleep,” he recorded in his dairy.

In the second week the fatigue worsened and he was sleeping 22 hours a day. He lost five kilograms. “Despite this rapid weight loss, I cannot recommend the COVID-19 diet,” he wrote.

He became disorientated and unsteady on his feet – common symptoms of the virus that have some scientists speculating it may effect our nervous system.

Trying to walk to the toilet, he found he had no idea where he was and fell heavily. But he never coughed or had difficulty breathing, two of the most common symptoms. 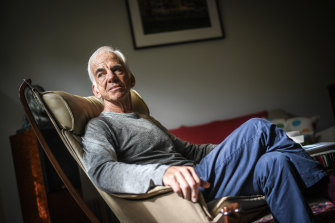 Professor Guttmann is grateful “to have survived largely unscathed”.Credit:Justin McManus

Almost two weeks after the onset of symptoms, Professor Guttmann finally started to feel better. His temperature went down. His fatigue cleared a little, and some of his appetite returned. He still felt very tired.

He received word from the others who had become infected.

The British mathematician still has not fully recovered, and is still struggling a full month after being diagnosed.

“He’s still dizzy, he still feels tired. And he’s younger than me and just about as fit,” Professor Guttmann said.

The second man the visiting academic is thought to have infected recovered in about six days. He gave the virus to his wife, who had a short burst of symptoms and then quickly recovered.

Professor Guttmann’s wife felt unwell for two days, although it is unclear whether that was a viral infection, a reaction to the stress of her husband’s illness, or something different altogether.

She has not been tested, and the couple are awaiting the development of antibody tests, which will be able to tell a person if they have ever been infected.

Professor Guttmann is now recovering, but the process is slow. “Every day I am getting stronger,” he said. He is running – “shuffling, really” – 1500 metres a day.

Yet he is grateful: for his friends and family, for the healthcare workers who supported him, and “to have survived largely unscathed”.

The final line in his journal reads: “Carpe diem, for who knows what tomorrow will bring!”

If you or anyone you know needs support call Lifeline on 131 114, or Beyond Blue's coronavirus mental wellbeing support service on 1800 512 348.