Elizabeth Finch “is about the most un-self-pitying person I have ever met. She knew the world to be unfair, and thought it naive of anyone else not to see that. She was, in her deepest self, a stoic.” This is not a line from Julian Barnes’ novel Elizabeth Finch, but from an obituary he wrote about his friend, the art historian and novelist Anita Brookner. She died in 2016. But it is a precise description of the fictional Finch from the eponymous novel. 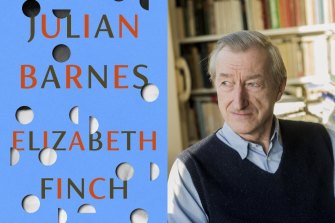 Julian Barnes’ novel is an homage to his intimidating friend, citing her intellect, poise, fascination and oddness.

The 2016 article describes an authoritative, constant, remote woman. Barnes, as no one but himself – distinguished cerebral writer – was painstakingly conjuring her as he wrote. The writing was fond but, more interestingly, it was puzzled. The puzzle has now been recast as fiction.

Finch is the lecturer on culture and civilisation on an adult-education course that Neil, the narrator, is taking. She expects dialogue with her students, telling them that collaboration is the best way to teach. She also says this: “Be approximately satisfied with approximate happiness. The only thing in life which is clear and beyond doubt is unhappiness.”

It is the 1980s, and afterwards the class goes to the pub. Without their teacher. Elizabeth in a pub is unimaginable. Unimaginable or not, she is with them because she is the essential topic of conversation. “We responded to her like kids back at school,” notes Neil. 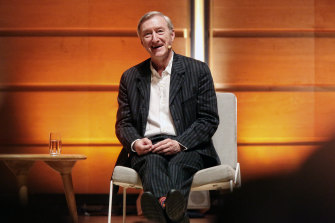 Julian Barnes, appearing at the Sydney Writers’ Festival in 2016.

What this diverse group see in their teacher is that same starry quality that touches us, if we are lucky, once in our lives. It is the glamour of knowledge delivered with certainty. So much for collaboration. Elizabeth Finch, romantic pessimist, does not suit everyone in the class, but for Neil she is the real, remarkable thing. Finally, he has arrived at the right place. Ghastly pun, but Neil does metaphorically kneel before his teacher. His humility is appealing.

Neil’s life is not straightforward. He’s a trained actor, but after spending too much time being a waiter, he and his family move to the country and grow mushrooms for restaurants. Neil’s profession provides the best line in the book, from Elizabeth: “Acting? The perfect example of artificiality producing authenticity.” Elizabeth herself is always impeccably staged.

Neil is between marriages and starts an affair with one of the other students, a down-to-earth Dutch woman. Another is in love with him. Later he and Elizabeth become friends and meet a few times a year, in London, for lunch; she remains mysterious, he remains beguiled. When she dies she leaves Neil her papers, diaries and some projected work. She was especially interested in the intellectual, reforming and last non-Christian emperor of Rome, Julian the Apostate. 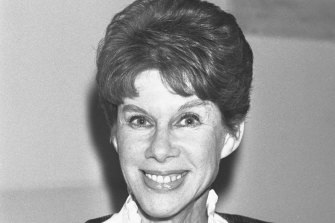 Neil writes that Elizabeth Finch’s strengths are “clarity, irony, wit, insight”. All Barnes’ strengths. All Julian the Apostate’s strengths, perhaps? And certainly Brookner’s. She won the Booker prize in 1984 for Hotel Du Lac, a novel exquisite in all the above. Brookner was always a specialised taste and time has made her even more so.

This novel is homage to Barnes’ intimidating friend, citing her intellect, poise, fascination, oddness and a hundred other small details that fall away the moment they suggest solid. But it is also a mystery novel. Barnes has written mysteries under a pseudonym but Elizabeth Finch is a mystery under his own name. Neil knows Elizabeth for more than 30 years but, finally, knows nothing about her except that she is a fortress of privacy. Why would a person make a cult of disappointment? Here’s the mystery, the intellectual chase. Yet Elizabeth Finch is also, and most successfully, an exploration of love beyond romanticism. Falling in love with the charismatic teacher is sometimes part of the course. It’s an old story, always up for refurbishing.

Barnes’ interest in philosophy bullies him as a novelist. Much of this novel is philosophy. And, regrettably, pedantry, although my pedant might be your teacher. Some will respond with cries of recognition and/or pleasure. Not me. There are many pleasurable moments, but I read with a curious, even unflagging exasperation. Clarity, irony, wit, insight are valuable, but they need currency. To be relevant they need to be adapted to the times, particularly irony, which has served male novelists far too well. An unpunishable, lofty sleight of hand.

In 2022 sincerity and authenticity are rumbling irony as the preferred mode for many highly literate readers and writers. As I read Elizabeth Finch, a novel so emotionally restrained as to be unsoundable, old emotions surfaced: of pretending, as women did in those long ago years, to be interested in a boring boyfriend’s philosophical ideas. And of reading Restoration plays, thinking: “This used to be funny. I guess.”

To read more from Spectrum, visit our page here.