Home » Lifestyle » ‘A night out at home’: How Melbourne’s restaurants are adapting to restrictions

‘A night out at home’: How Melbourne’s restaurants are adapting to restrictions

Putting on a nice dress, a splash of lipstick and some perfume before heading out to your favourite restaurant to celebrate an occasion is suddenly an enjoyment of the past.

But some of Melbourne’s fine-dining restaurants are finding ways to bring that special experience to your home during the COVID-19 lockdown, including Mercer's in Eltham. 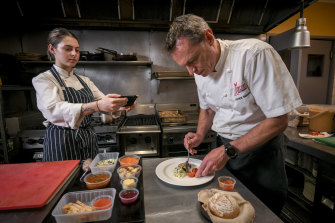 Chef and owner Stephen Mercer is asking his customers to switch off their televisions, set their tables and light a candle before sitting down to a three-course dinner of his food.

To avoid the disappointment of a substandard meal, Mercer’s take-away requires some home preparation to make sure it in served at a restaurant standard.

Diners heat, prepare and plate up his dishes, such as roasted capsicum mousse, Atlantic salmon and leek terrine or strawberries and cream, following video tutorials posted on Facebook.

“We thought this was a little bit different, a bit unique. A night out at home,” Mercer said.

“We’re filling that niche – anniversaries, birthdays that would have been in the restaurant – they're so excited that they've got an option to celebrate somewhere.”

The initiative has been an instant success, meaning that although the restaurant’s prices have had to drop, it will survive until restrictions are lifted.

“We’re lucky in many ways that we're a suburban restaurant,” Mercer said.

“We've got a really loyal following. Despite increasing numbers every week, we have sold out within hours.”

However, it was Mercer’s wife Ute who convinced him that take-away could be viable.

“It was really touch-and-go whether we were winding out a month ago,” he said.

“Like many other restaurants at that point we were seriously thinking, after 23 years, that could be it for the restaurant.”

The Restaurant and Catering Industry Association estimates that up to a quarter of restaurants could close for good during the pandemic, with some kind of social distancing expected for some time even if restrictions ease.

It estimates that around one-third had shut temporarily, while the other two-thirds were operating at some kind of decreased level.

“It depends on how quickly they acted to change their business model and accepted that the lockdowns were going to be for a long period of time,” chief executive Wes Lambert said.

“Reaction is pivoting your business model to whatever works for you.”

Mr Lambert said that could include take-away only or with a mix of delivery, but that the most innovative businesses, such as Mercer’s, were the ones surviving.

Other fine-dining restaurants have opted to use the same model as Mercer’s, including Atlas in South Yarra and Thai restaurant BangPop in the CBD, while others, such as Sunda, are delivering meals to home cook with instructions or providing produce boxes.

Mr Lambert said one restaurant was offering a Zoom virtual service where waiters poured wine, lit candles and served plates on a screen sitting on a home table.

“It’s all about creating an atmosphere,” he said.

“Help the diner to create their own experience. Helped them to understand how they can recreate it in their own environment.