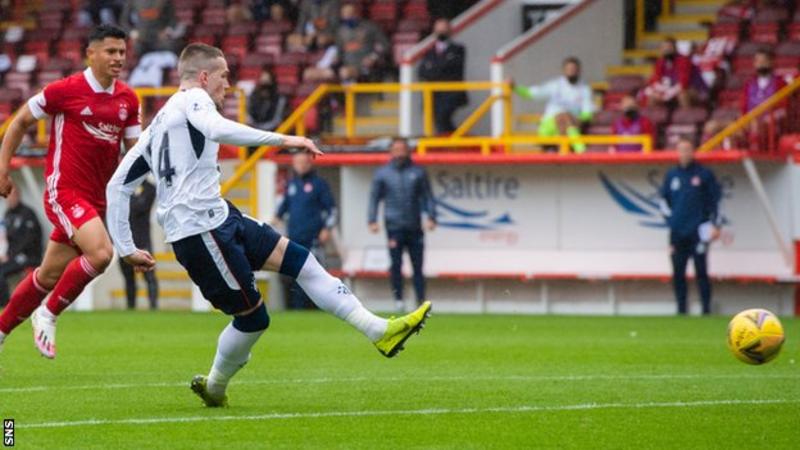 Rangers got the Scottish Premiership season under way with a surprisingly comfortable win over Aberdeen thanks to Ryan Kent’s strike at Pittodrie.

There was little evidence of the much-discussed intense rivalry between the sides until home defender Andrew Considine was sent off late on.

The hosts looked particularly subdued by the requirement for empty stands.

The former Liverpool winger’s strike was no more than Rangers deserved given their almost total domination of the first period.

Morelos’ participation amid interest from Lille dominated the pre-match talk, but it was the absence through injury of Aberdeen strikers Sam Cosgrove and and Curtis Main that was most significant in the early stages.

Rangers controlled possession without threatening a goal until a clever chest flick from Ianis Hagi found Morelos on the half-way line and the striker slipped it neatly through for Kent to beat goalkeeper Joe Lewis one on one.

It took the home side 28 minutes to force Allan McGregor into an easy save from Funso Ojo – and 59 to win their first corner – before Considine’s straight-leg challenge on Scott Arfield damaged their chances further.

Without displaying the intensity of a side desperate to prevent Celtic securing a 10th consecutive league title, Steven Gerrard’s visitors had done enough and it took a fine goal-line clearance from Ash Taylor to prevent Joe Aribo extending the lead in the closing minutes.

Man of the match 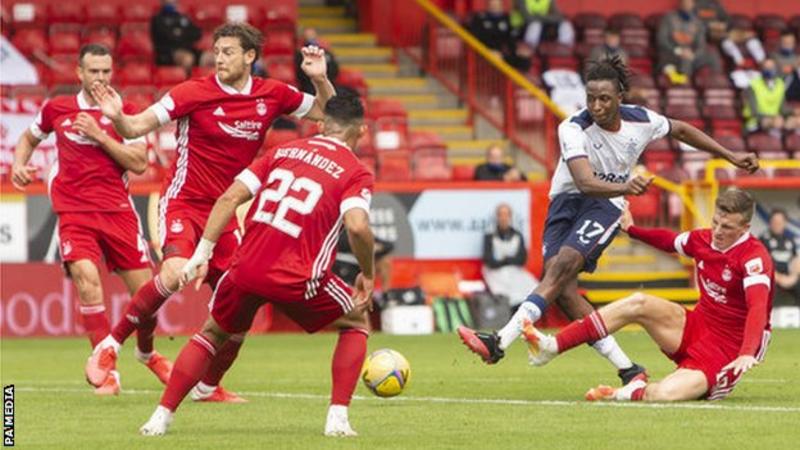 What did we learn?

Could the Premiership be mirroring the re-start experience in England, where the Covid-19 enforced absence of fans appeared to favour away sides?

Certainly, Aberdeen lacked that extra spark of menace required to trouble the visitors until Leeds United loanee Ryan Edmondson came on. The 19-year-old appears to have the physical presence required to compensate for the absence of Cosgrove.

Gerrard and his players have bemoaned last season’s tendency to fade after impressive starts to matches and the Rangers manager’s concern could continue despite this victory.

On the plus side, former Wigan Athletic centre-half Balogun looks like a shrewd acquisition. On the down side, Morelos rarely looked like preventing his run of competitive games without scoring being extended to eight.

What did they say?

Media playback is not supported on this device

Aberdeen manager Derek McInnes: “Rangers controlled the game early on, but I thought we finished the first half better, got closer to them, got our distances better for pressing and, in the second half, it felt like a game.

“I thought the level of performance was decent, in the second half in particular, and we just needed to work the goalkeeper more.”

Rangers manager Steven Gerrard: “It’s a marker for us because all eyes were on us today in the first game. When the fixtures came out, everyone was saying, ‘Oh, it’s Aberdeen away, will they drop points?’.

“Aberdeen ran us all the way to the end, so we’ll go away pleased at picking up three points and getting a clean sheet. We have to build on this now, but no-one will get carried away.”

Aberdeen head to Perth to take on St Johnstone at McDiarmid Park next Saturday and Rangers host St Mirren a day later. But, before that, Gerrard’s side will look to overcome a 3-1 Europa League last-16 deficit against Bayer Leverkusen on Thursday in Germany.

Connor Goldson (Rangers) wins a free kick in the defensive half.

Attempt missed. Glen Kamara (Rangers) right footed shot from outside the box is too high. Assisted by Alfredo Morelos.

Attempt blocked. Ryan Kent (Rangers) left footed shot from the right side of the box is blocked. Assisted by Joe Aribo.

Attempt blocked. Joe Aribo (Rangers) left footed shot from the right side of the box is blocked. Assisted by Scott Arfield.

Dean Campbell (Aberdeen) wins a free kick in the defensive half.

Connor Goldson (Rangers) wins a free kick in the defensive half.

Scott Arfield (Rangers) wins a free kick in the defensive half.

Attempt blocked. Niall McGinn (Aberdeen) right footed shot from the right side of the box is blocked. Assisted by Ryan Hedges.

Jonny Hayes (Aberdeen) wins a free kick in the defensive half.