SHOPPERS have said they’re furious after Aldi’s sold-out egg chair popped up on eBay and Gumtree for double the price.

Thousands of people queued overnight online to buy the £150 hanging egg chair after Aldi revealed it was coming back once more. 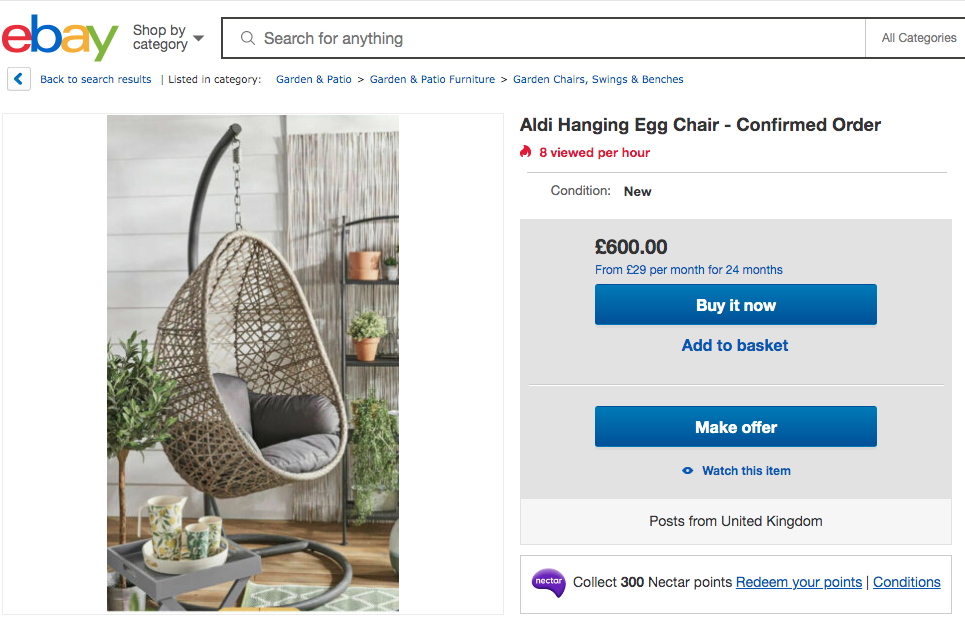 It then sold out in a matter of hours.

Now shoppers have said they’ve found the chairs on resale websites Gumtree and eBay for double the price.

When The Sun checked eBay’s website on Monday morning some listings showed that you could buy one of the chairs with the “buy it now” option for £600 – an increase of £450 compared to the original price.

Other eBay users had started auctions with the chairs, which were already up to £360 with 12 bids – an increase of £210. 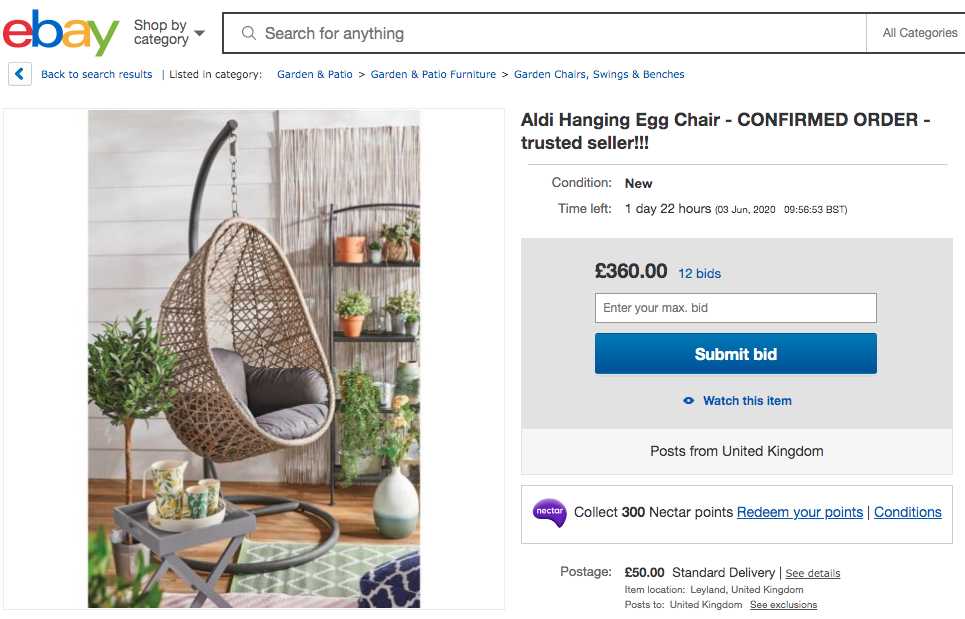 Postage, often an extra on eBay listings, could also be as high as £50.

Meanwhile on Gumtree, the chair was listed as double the original price at £300. No postage fee was mentioned so we can't confirm if that would cost more.

Shoppers have criticised eBay and Aldi for the inflated resell price, with some calling for Aldi to have put in a capped amount onto each sale.

On shopper wrote to Aldi on Twitter and said: "@AldiUK so disappointed with Aldi. After waiting til gone 1am and being one of the first on the site the hanging egg chair wasn’t even listed.

"An hour later it apparently pops up on the site and people who didn’t even queue are putting them up on eBay for extortionate prices!"

Another posted: "I wanted to tell you about the story of the Aldi egg chair. I have put a complaint into Ebay as people bulk bought this product from Aldi and are now selling it on EBay for staring prices of £300."

While one said: "@AldiUK Well done for not limiting the egg chair purchases. They're all on eBay now for double the price or more. Maybe think about people who actually want them rather than people who are just money grabbers."

The Sun has contacted Aldi, eBay and Gumtree for comment.

We've compiled a list of where else you can buy an egg chair if you were unable to buy one.

It’s not the first time eBay sellers have flogged in-demand items on its website after a shortage.

Toilet rolls were listed on eBay for up to £1,000 after supermarkets shelves were cleared by panic-buyers.

Aldi’s sell-out Kevin the Carrot toys were previously being sold on eBay for up to £1,000.

Meanwhile hairdressers have been secretly breaking lockdown rules by working from home and advertising their services on Gumtree and Nextdoor.

END_OF_DOCUMENT_TOKEN_TO_BE_REPLACED

END_OF_DOCUMENT_TOKEN_TO_BE_REPLACED
This website uses cookies to improve your user experience and to provide you with advertisements that are relevant to your interests. By continuing to browse the site you are agreeing to our use of cookies.Ok