ASDA shoppers have been snapping up a three-seater sofa worth £375 for a tenner in what appears to be a price glitch.

The Edmund sofa comes in five different colours – but the prices range dramatically depending on which one you choose. 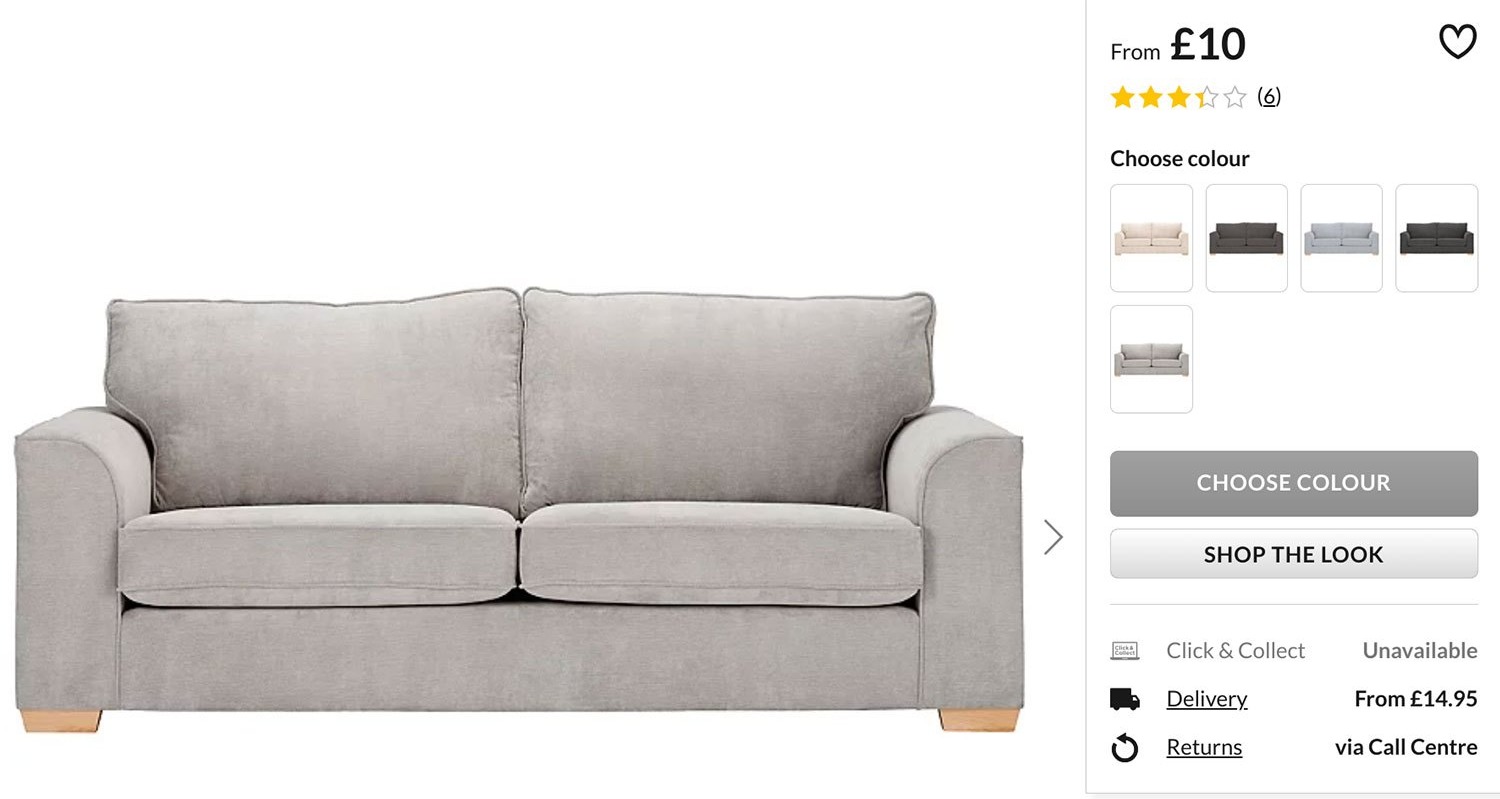 The cream version will set you back a realistic £375 but the duck egg colour sofa costs just £10.

In fact, the living room essential costs less than the delivery, which starts at £14.95.

The supermarket's website also lists a charcoal grey version of the George sofa on sale for £14, the silver colour for £30 and pewter for £35.

Shoppers who've spotted the bargain have ordered multiple sofas hoping to cash in on the unbelievable prices. 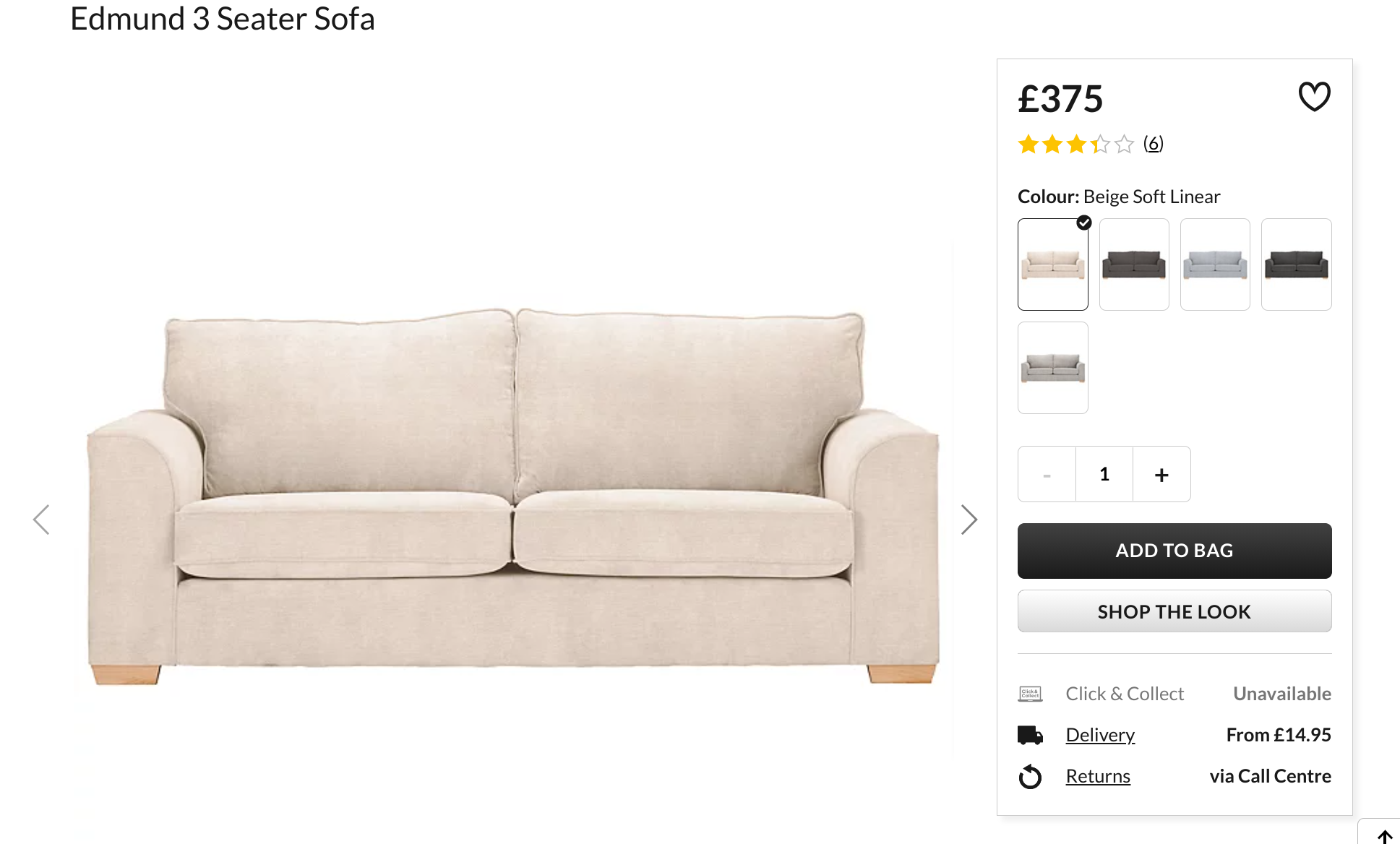 The Sun reader Don, 31, from Lewisham, said he'd bought three of them after a friend alerted him to the deal.

"My mate called me in hysterics about the deal," he said. "His mum has already bought six of them.

"The real story is going to be whether they turn up or not."

Asda is yet to confirm whether the prices are legitimate or the result of an error.

Technically, retailers don't have to honour price glitches if it was a genuine mistake.

However, once it's been sent to you the company can’t usually cancel your order, even if it realises it's sold you something at the wrong price.

But as the deal has only been live on the website for a few hours, it's unlikely any have been sent out.

Even so, customers have taken advantage of the super low prices in the hope that the sale goes ahead.

"I really just bought two sofas for £20. Nah my head hurts lol," one Tweeter wrote,"can't wait to see what they deliver."

Another customer wrote: "Did I just purchase a sofa from Asda for £14? Yes. Do I have a sofa? Yes."

A third person said: "There's an Asda glitch. Just bought a three seater sofa for £25 and I don't even need it. Thank me later."

How to find price glitches

IT’S a fine art to hunt out price glitches and discounts.

That’s why The Sun previously spoke to self-confessed Durham “Del-Boy” Shaun Grey, who set up the UK Coupons Deals & Cashback Facebook group, to get some tips.

He reckons you could save thousands every year by doing the following:

Implying that the discount might not be honoured, one shopper said: "I will fight Asda for my £10 sofa."

The Sun has contacted Asda to find out whether it will be honouring the prices – we'll let you know what they say.

If it won't, it means your order will be cancelled and your money returned.

Since publishing, the supermarket has pulled the listing from its website.

In February, Amazon shoppers picked up kids bunk beds for £23.49 after a price glitch brought it down from £219.99.

M&S shoppers also snapped up a £129 footstool for £1 after a glitch saw the price dramatically reduced.

An in October, cheeky Brits rushed to Tesco to take advantage of a computer glitch that gave double discounts on meal deals – costing one shopper just 4p.