The space agency has been monitoring the situation in California, where fires are still ablaze across the Golden State. Satellite images have shown that 1.5 million acres, which is roughly 2,343 square miles, have been hit by this season’s wildfires.

With the whole of California being about 163,696 square miles, this means almost two percent of the State has been hit by wildfires.

According to NASA, the wildfires this year have been astonishingly vast, with 20 major fires and fire complexes actively burning across California in early September.

Data from the Operational Land Imager (OLI) on the Landsat 8 satellite have shown the LNU Complex had burned 375,209 acres (586 square miles) by September 2, making it the third-largest wildfire by acreage in state history.

Another 100 miles south, the SCU Lightning Complex east of San Jose was the second-largest fire in state history, having burned 391,578 acres (612 square miles). 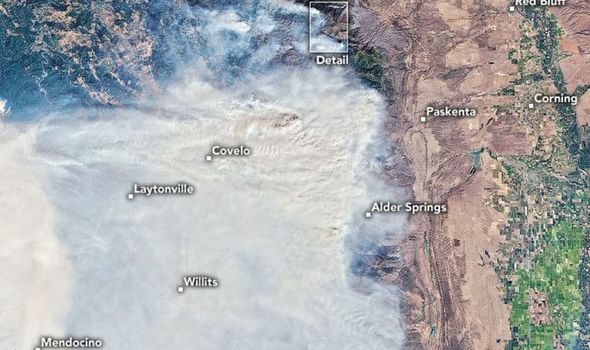 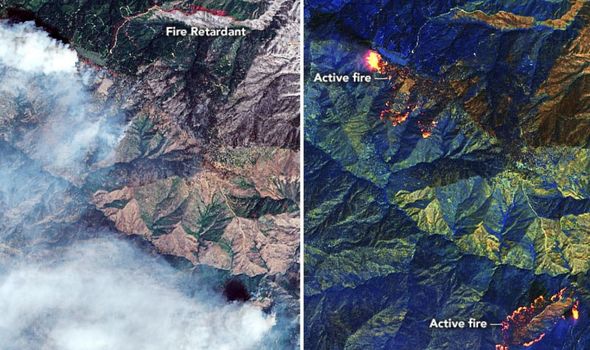 “The August Complex continues to spread aggressively, while the fire complexes further south have slowed their advancement.

“The fire management community utilises data like this, as well as other thermal-infrared sensor data on satellites and airborne platforms, to quickly identify fire hot spots for indicating where fires are burning.

“This allows fire managers to quickly mobilise firefighting resources and personnel, and aids with post-fire burn severity mapping to allow rapid rehabilitation and recovery operations to occur on the most critical ecosystem-affected areas.” 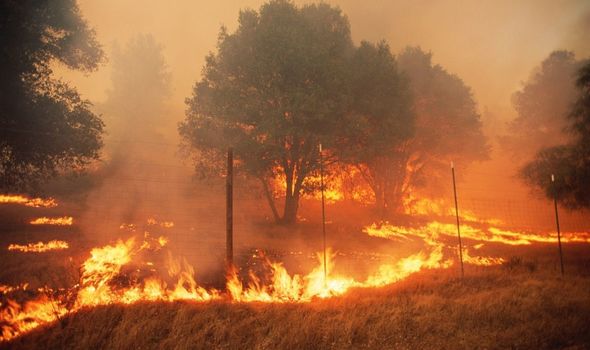 According to NASA, more than 3,700 structures have burnt during the fire, while air pollution in California for August was five times higher than the same month in 2019.

If these particles make their way into the lungs, it can lead to serious health problems such as respiratory irritation and shortness of breath.

In severe cases, inhaling smoke from fires can lead to death. 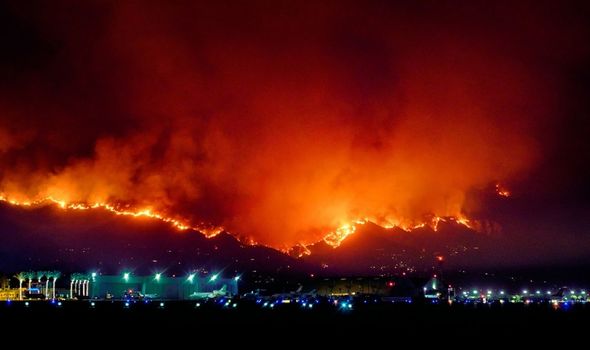 According to data from the Terra satellite, Los Angeles, Las Vegas, parts of San Francisco and into Idaho are where the most smoke is congregating.

Mr Ambrosia continued: “The lightning-caused wildfire events seen in Northern California were the result of the perfect storm.

“Many of the areas that have burned, including the August Complex Fire area, have experienced higher fuel loads due to the absence of periodic fires in those areas, which combined with the aforementioned variables contributed to more intense wildfire spreading.”

END_OF_DOCUMENT_TOKEN_TO_BE_REPLACED

TOTTENHAM and Leyton Orient don't expect to discover before tomorrow morning if their Carabao Cup clash will go ahead after the League Two club were hit by a Covid-19 outbreak. Several first-team players tested positive for the virus today leading to their training ground and stadium being closed down while experts investigate the sudden spike. Orient are desperate to stage the match […]

END_OF_DOCUMENT_TOKEN_TO_BE_REPLACED
This website uses cookies to improve your user experience and to provide you with advertisements that are relevant to your interests. By continuing to browse the site you are agreeing to our use of cookies.Ok