The camera crew for new BBC series Primates have revealed how they battled tropical storms and tough terrain to capture rare monkeys on film during the two-year long shoot.

Mike Gunton, Executive Producer, said catching the animals on film was ‘the hardest’ challenge, with most living in ‘remote, hot, steamy jungles’ at the top of ‘very tall trees.’

The team spent 24 months filming across 28 expeditions, battling snowstorms in Morocco’s Atlas Mountains, and forded or floated through flooded jungles in remote corners of Sumatra and Brazil.

Emmy winning cameraman James Aldred spent 10 hours a day for 15 days cramped in a hide in the canopy of the rainforest in all weathers on a mission to film the uakari for the programme. 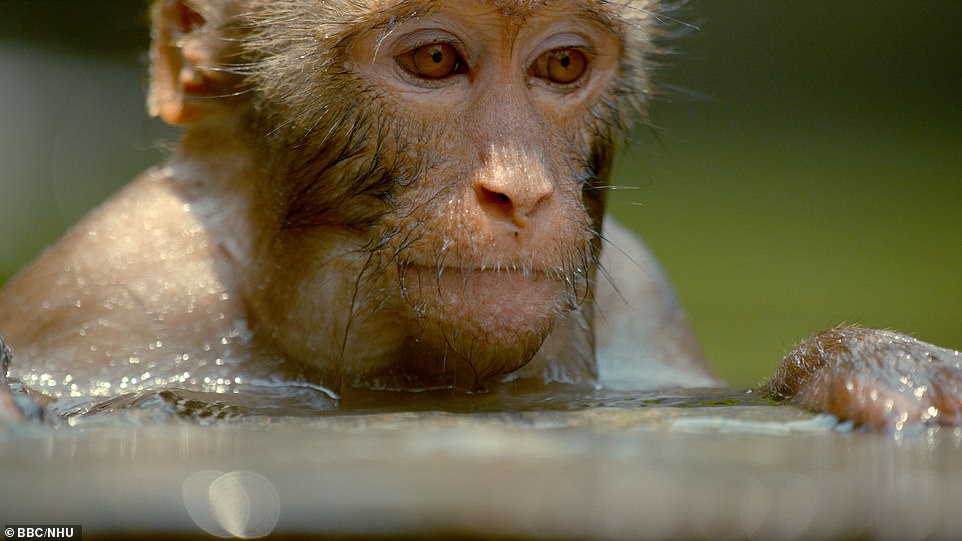 The team behind the new nature documentary Primates from the BBC have opened up about the challenges of capturing footage of some of the world’s rarest monkeys (pictured, the Rhesus Macaques in Kathmandu) 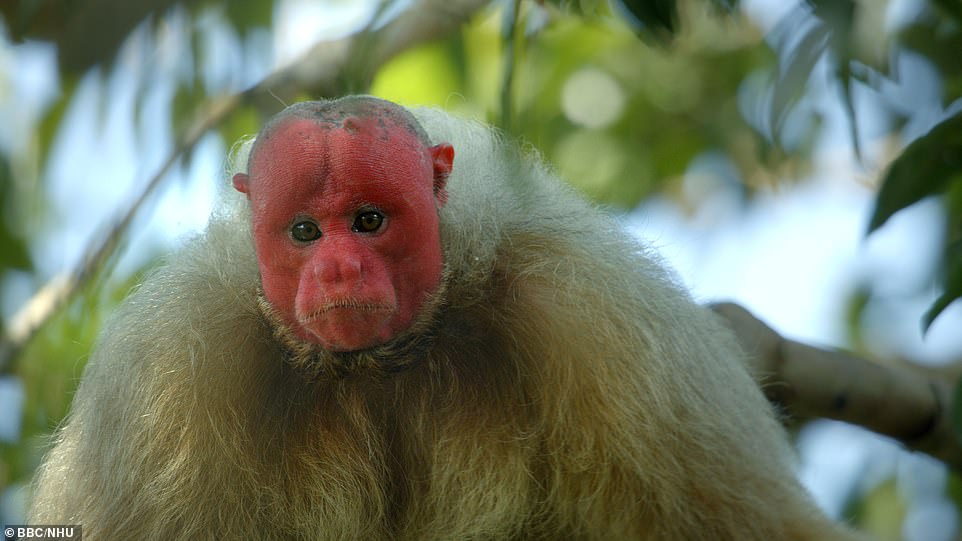 Emmy winning cameraman James Aldred spent 10 hours a day for 15 days cramped in a hide in the canopy of the rainforest in all weathers on a mission to film the uakari for the programme (pictured, a glimpse is usually the most you ever see of a striking bald-headed White Uakari) 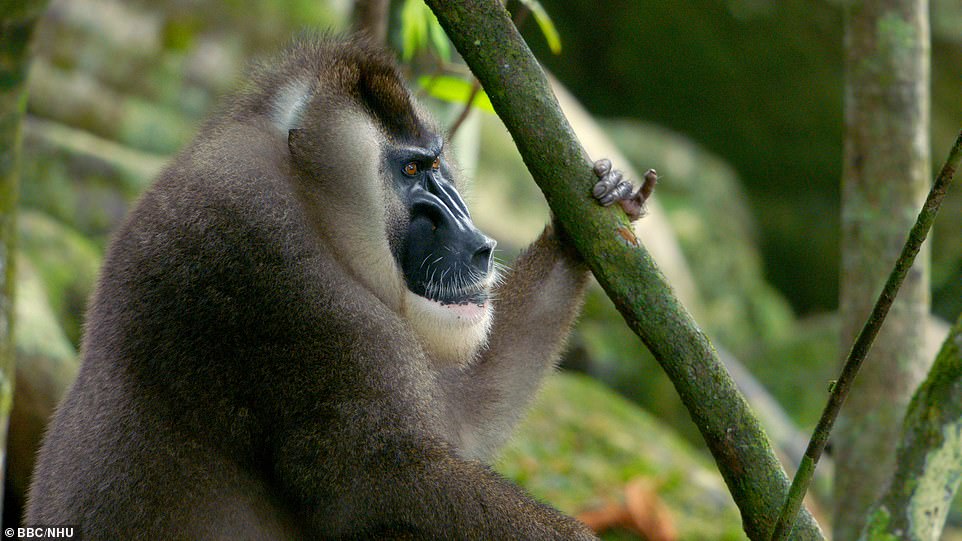 The crew battled snowstorms, tropical weather, flooded rainforests and tough terrain in order to capture the stunning footage of the primates (pictured, the male Drill (Mandrillus leucophaeus). One of the world’s largest monkeys, and yet one of the least known) 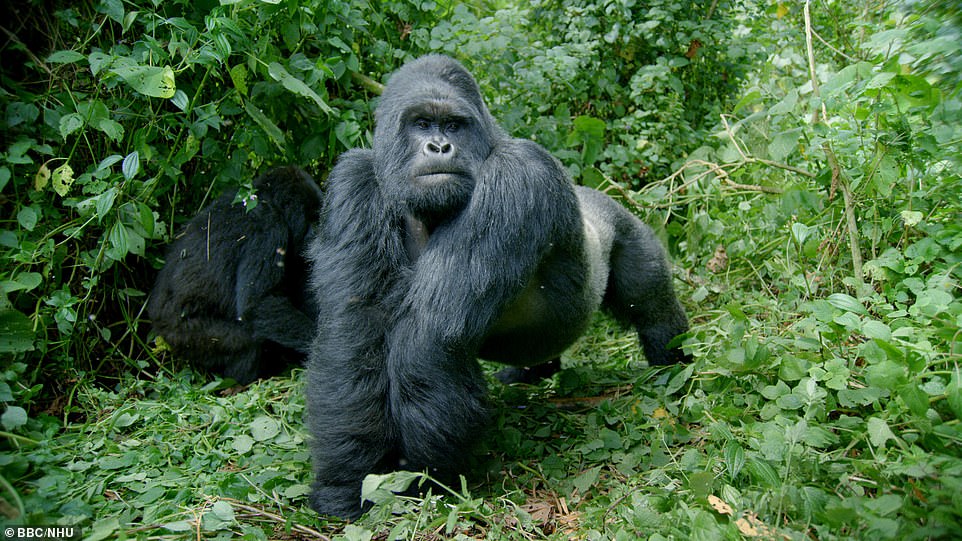 And in Equatorial Guinea, one team spent over two months camped on a remote beach to capture the most intimate images ever seen of a drill, one of the world’s least understood primates.

Meanwhile in Sri Lanka, another crew captured the very first low-light colour images of the elusive gray slender loris at night in the wild.

Mike revealed that the shoot was particularly challenging because of the nature of the animals.

He said: ‘They can also move very fast through the forest and so keeping up with them and getting close-ups is the challenge. 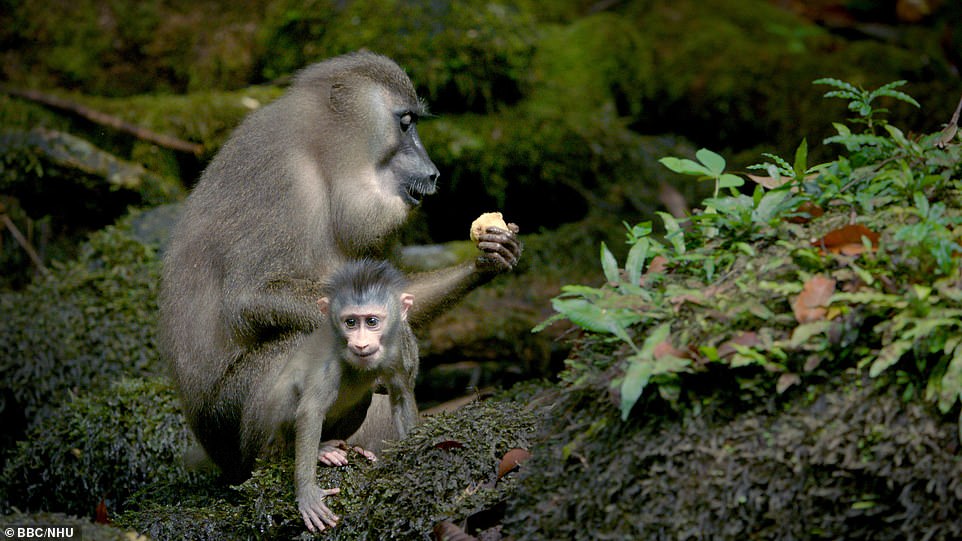 The Primates crew spent 2 months in the field on Bioko Island, Equatorial Guinea to capture the rare Drill on film during their two year long shoot 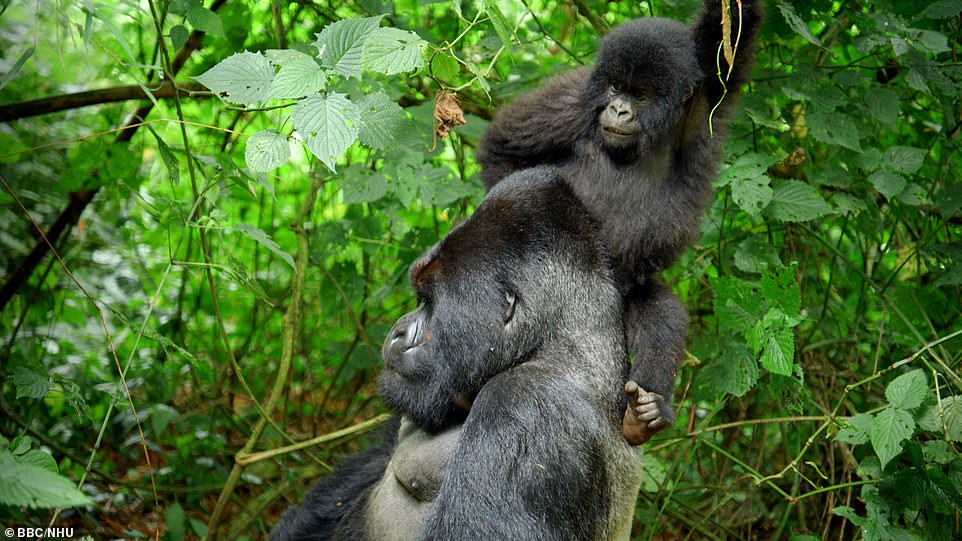 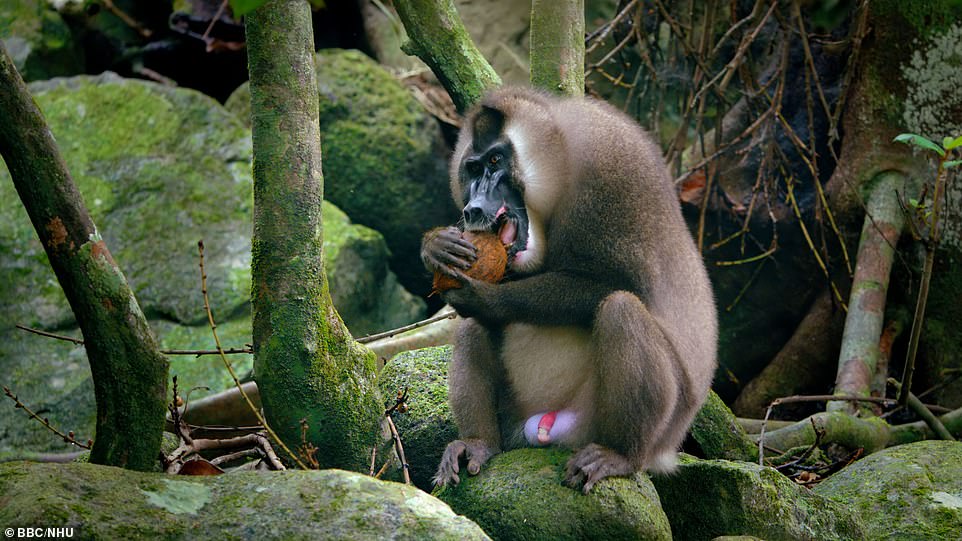 A toothless old male Drill (Mandrillus leucophaeus) struggles to break into a coconut that has washed up on Bioko Island, Equatorial Guinea

‘The skills of the scientist in predicting the behaviour and the camera teams to get into the right place are vital.’

‘Making the series we were determined to give the audience as close and immersive a viewpoint as possible both to see the world through individual primates eyes and to reveal the way they overcome their daily struggle to survive.

‘That means really getting to know individuals by spending lots of time with them. If you do that well and you’re lucky they ignore you, that means you get to capture those special moments up-close.’

In order to get as close to the animals as possible, cameramen were often rigged into high trees, with lots of shooting taking place on filming platforms specially constructed in the treetops. 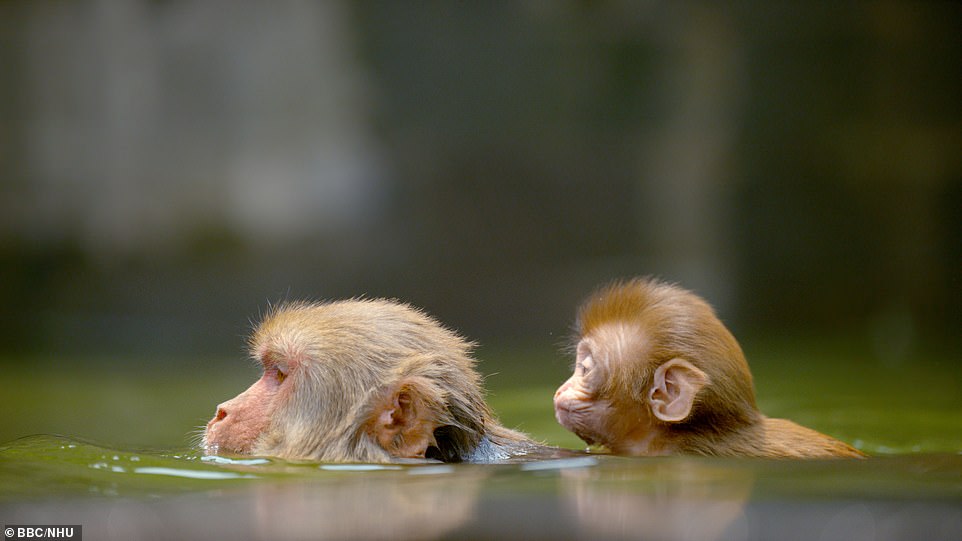 Rhesus Macaques (Macaca mulatta) are able and enthusiastic swimmers. This female and her infant have sought respite form the midday sun in a swimming pool especially built for their troop in Khathmandu, Nepal 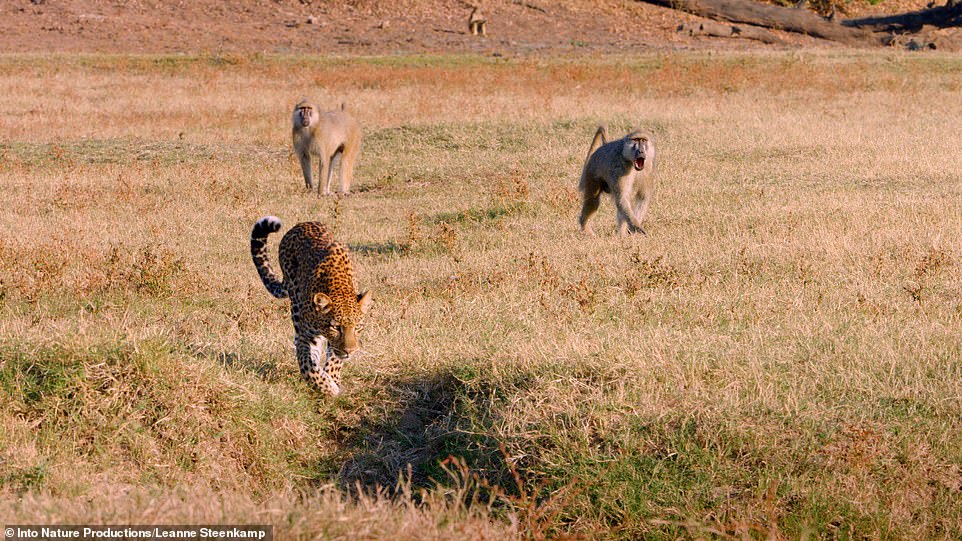 Mike revealed: ‘It’s a very skilful job to make it safe, of course, but also to pick the right spot.

‘Get it wrong by a few metres and the primates are too far away or even worse they head off in a different direction.’

He added: ‘It’s heart-breaking to have to take the platform down and run off to find another place to put it… hopefully before the animals decide to move on again.’

Meanwhile cameraman James recalled one terrifying experience while trying to film the uakaris. 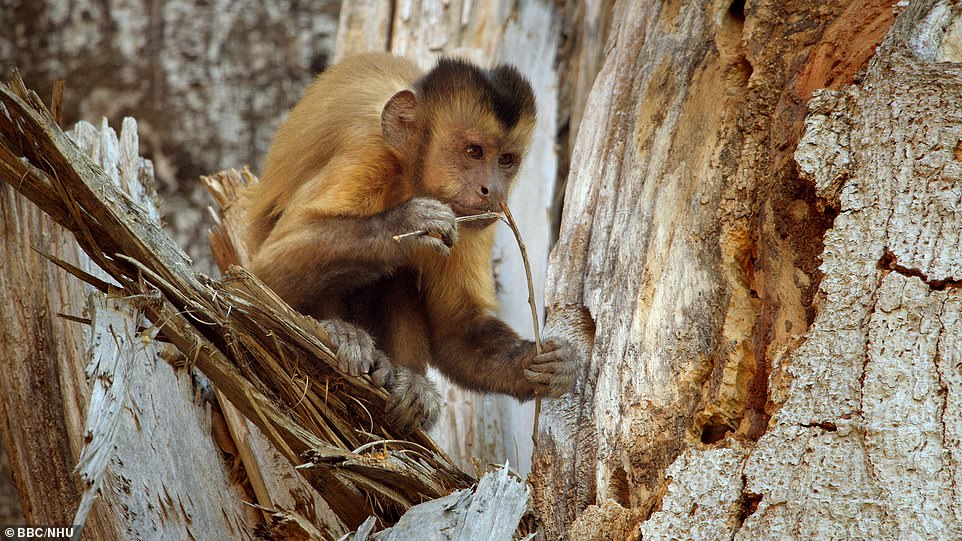 Filming often required the crew being hoisted high into trees and rainforest canopy to capture the animals movements (pictured, a young Bearded Capuchin (Sapajus libidinosus) uses his mouth and hands to prepare a stick tool to find food in Brazil) 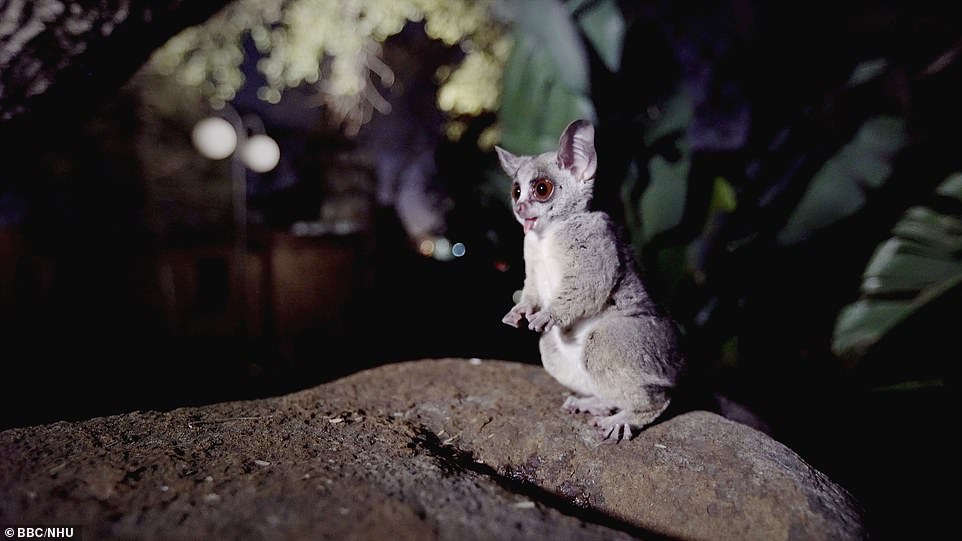 A lesser bushbaby (Galago moholi) stops to listen for danger during a moonlight raid of Pretoria Zoo, South Africa 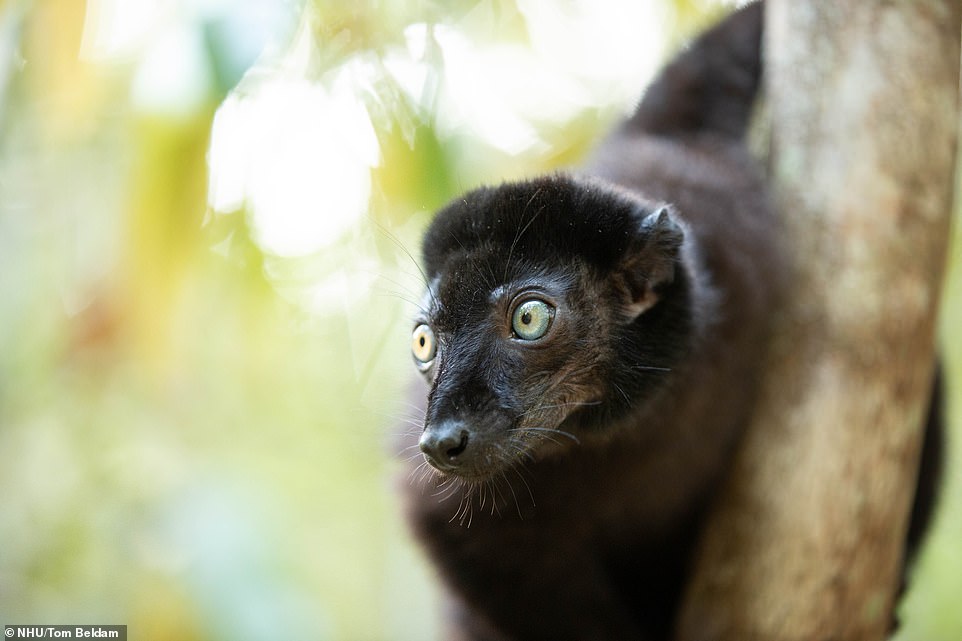 Blue-eyed black lemur (Eulemur flavifrons) Sahamalaza, Madagascar. It’s the first time these rare lemurs have been filmed. They have bright blue eyes and a penchant for rubbing themselves with ants…! It is thought that this strange behaviour is an attempt to self-medicate, repelling ticks and parasites 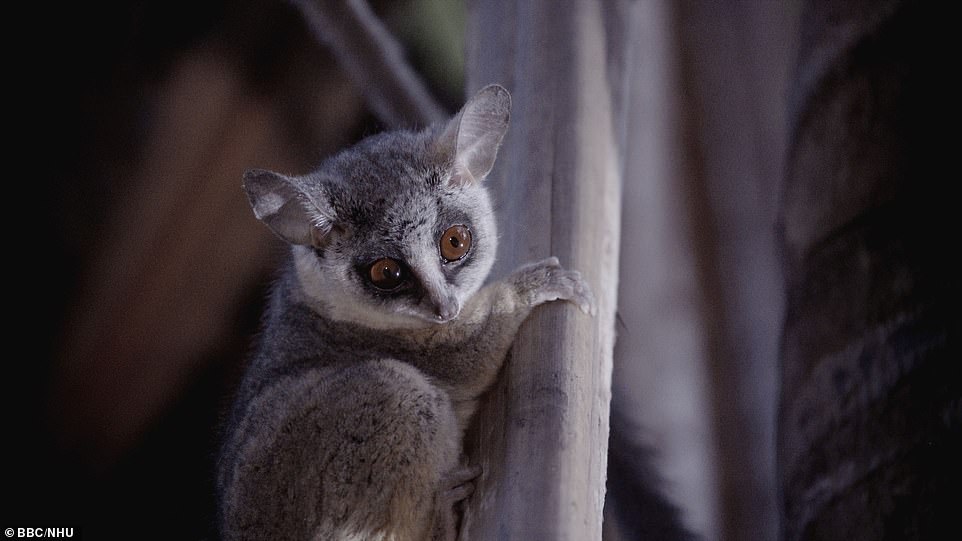 James revealed: ‘One particular storm caused an exponential amount of hassle, fear and chaos because my platform was rigged in a less than desirable tree.’

He explained; ‘Problem is, in a flooded forest, there is nothing but deep water beneath you, so until someone gets to you in a boat there is nowhere to go. You are left strung up on a rope above caiman-filled water.’

The camerman said he believed the animals were well worth the risks of filming, saying: ‘Uakaris are such a little studied and researched group of primates that I honestly felt that every shot we were able to secure was breaking new ground.

‘I can’t remember the last time I saw a sequence on them, and for good reason. They were quite the challenge.’ 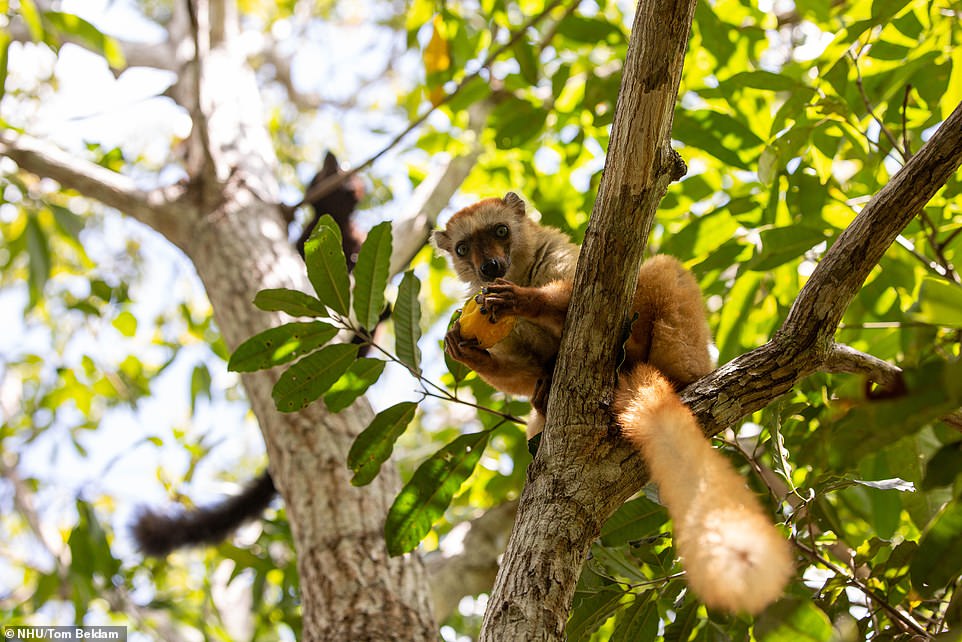 In order to capture the incredible footage from up-close, filming often required the team building platforms within trees and becoming personally acquainted with the animals 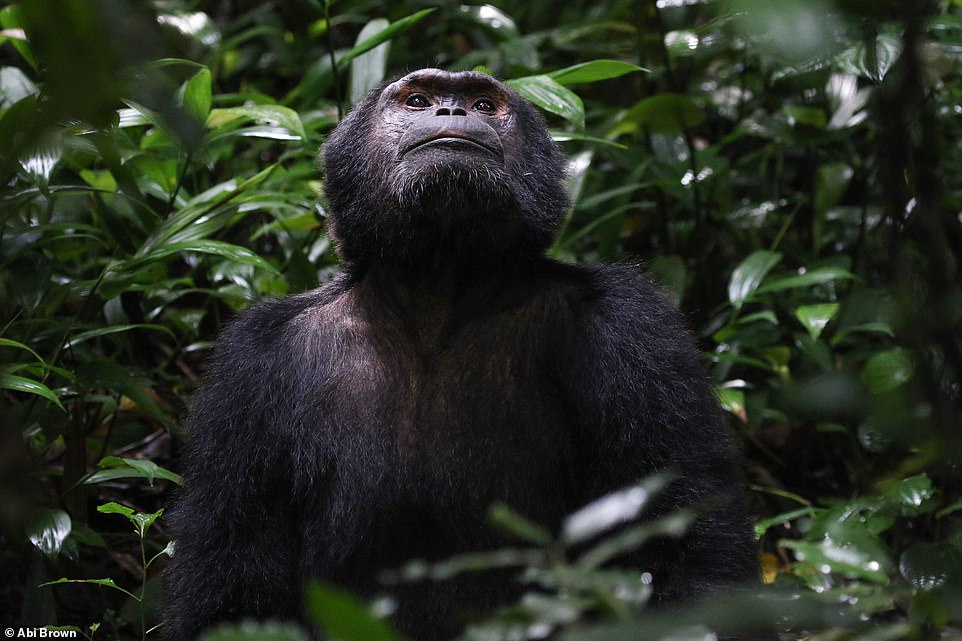 He explained: ‘Over the course of four weeks I think I filmed them five times and only then for a matter of minutes each time. I spent many hours sitting in my hide 70 ft above the water below, just waiting for those crazy-beautiful, strange beasts.

‘Storms are an occupational hazard in the rainforest canopy, and I’ve had many over the years.

‘But the weather we experienced in the flooded forest was particularly violent and sudden.’

James explained that he had left himself exposed in a ‘less than desirable’ tree in order to catch a glimpse of the monkeys. 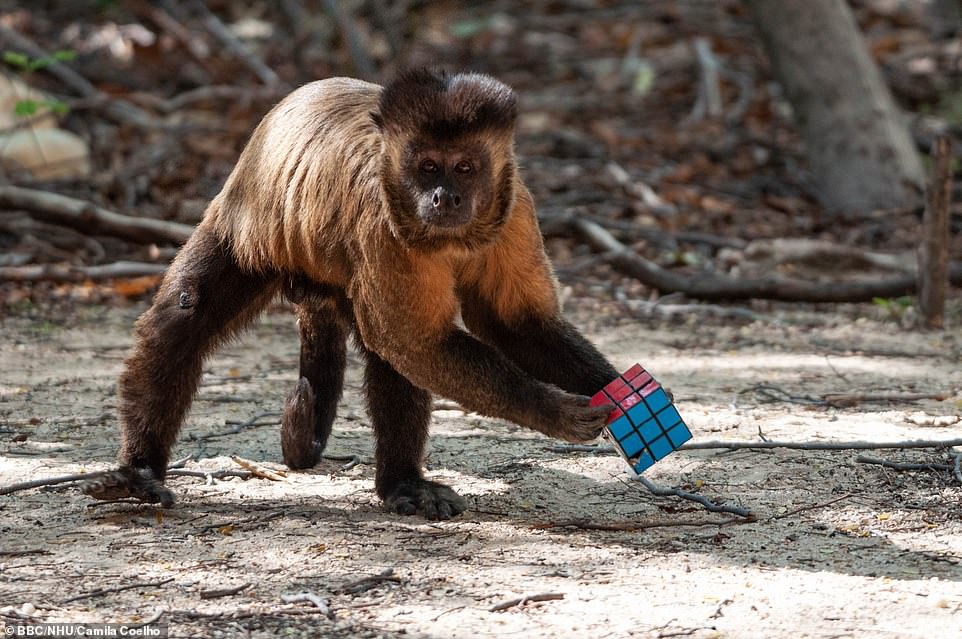 Bearded Capuchin (Sapajus libidinosus), Brazil. Bearded Capuchins use the largest variety of tools of any monkey! They inhabit a huge range of environments from parched scrub-land to lush rainforests. They are so intelligent that they will investigate almost anything

He said: ‘There was little choice and I’d had to install it in the only tree that had a clear view of the fruit tree we wanted to film.

‘I was often perched, ready to abseil back down to safety at the first sign of thunder and lightning.’

However, he revealed on one occasion, he was left in the tree awaiting a rescue boat to come and pick up him.

Despite the terrifying experience he said time in the tropical canopy is ‘nothing short of a revelation.’

he said: ‘A naturalist’s paradise. It’s such a secret and unexplored environment. And wildlife – primates in particular – tend to be a lot more accepting of human presence in the canopy. 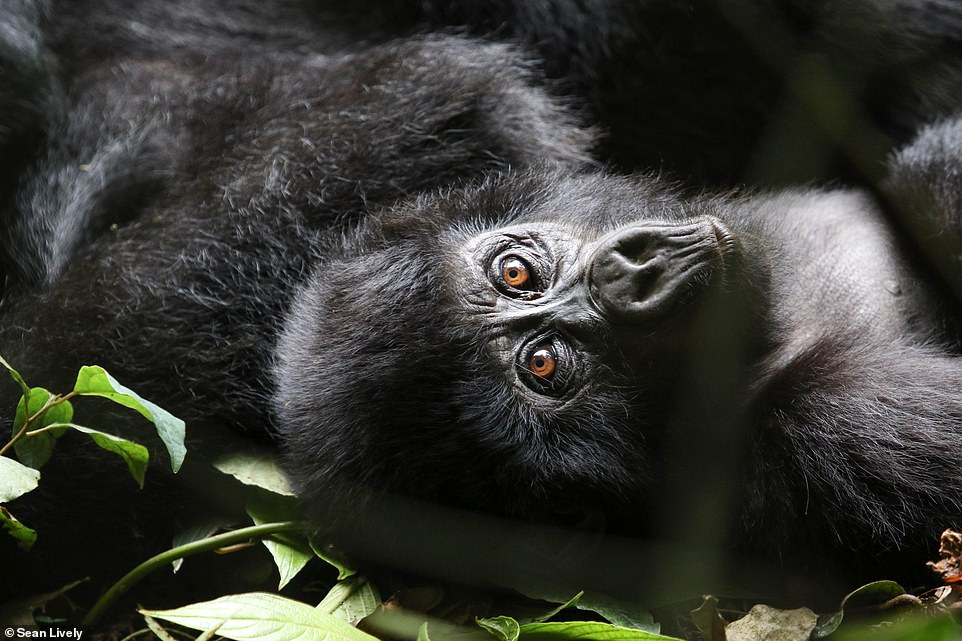 Mountain Gorillas (Gorilla beringei). Gorillas are highly social and live in groups of about 10 individuals on average

‘The same animals that would steer clear of humans on the ground seem to show few qualms about coming close to a cameraman perched high in the trees.

‘For this reason, a canopy camera perspective can help deliver incredibly intimate and rare insights into their world.

Primates are just a lot more relaxed, and a relaxed animal is more likely to behave naturally and grant you access to the shots that people remember.

‘And having the opportunity to film in the flooded forests of the Amazon, watching a river dolphin swim beneath you as you perch in the branches of a tree high above, is hard to beat.’

Primates is due to start on 26th April on BBC One