Cartilage is created from scratch with a 3D printer by scientists

People suffering with damaged knees and hips could be treated with 3D-printed artificial cartilage that protects the joints, scientists hope

People with worn out hips, knees and vertebrae are commonly plagued by a lack of cartilage, which results in bone-on-bone rubbing, inflammation and discomfort.

Now, scientists have used 3D-printing to create an artificial analogue of cartilage which could be used to treat these patients.

The synthetic cartilage has the same properties as the real thing and could allow afflicted joints to once again be cushioned and protected.

Creating synthetic versions of cartilage has long been thought impossible due to the complexity of the material. 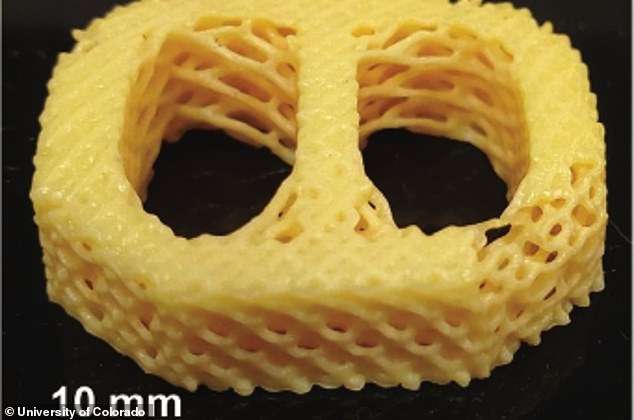 But scientists at the University of Colorado used the precision of modern 3D printers to make an analogue. They made a 3D printed lattice structure using liquid crystal elastomers (LCEs), which allows them to build materials similar to real cartilage (pictured)

But scientists at the University of Colorado used the precision of modern 3D-printers to make an analogue.

Their research focuses on manipulating liquid crystal elastomers (LCEs), which are known for their elasticity and extraordinary ability to dissipate high energy.

Role of cartilage in the human body

Real cartilage is very versatile and has a range of uses in the body.

There are three different types of cartilage:

Found in the nose, trachea and ribs.

This type of cartilage has a glassy appearance when fresh, hence its name, as hyalos is greek for glassy.

It is dispersed with collagen fibres but is the weakest of the three types.

That is why it is easier to break a rib or your nose than it is to damage the cartilage in a person’s knee.

Found in the outer ear.

Elastic cartilage provides strength, and elasticity, and maintains the shape of certain structures.

Found inside joints and has a remarkable ability to absorb dissipate energy.

It is the presence of this which allows humans to jump and run as it acts as a shock absorber in the body.

This is the strongest kind of cartilage, because it has alternating layers of hyaline cartilage matrix and thick layers of collagen.

For example, recent research has looked at using them as a shock absorber for American football helmets, to prevent concussions and CTE.

LCEs are also what what phone displays are made of, and the same material is also used to make Kevlar.

In Kevlar body armour, the polymers can absorb the enormous amount of energy from a bullet. Researchers managed to make these polymers soft enough to be used as the ‘ink’ in a 3D printer.

Medical researchers have been experimenting with LCEs for a while, believing it may be possible to make the most of their properties.

Real cartilage is very versatile and has a range of uses in the body. There are three different types of cartilage: hyaline (nose, trachea and ribs), elastic (outer ear) and fibro.

The latter is the type found inside joints and has a remarkable ability to absorb and dissipate energy.

It is the presence of fibro cartilage which allows humans to jump and run, as it acts as a shock absorber in the body.

If it breaks down due to arthritis, injury or old age, the bones are left without a cushion between them and they rub and grate on one another, which can be extremely painful and debilitating.

The scientists turned the LCEs into a honey-like resin and inserted this into a specialised 3D printer.

This allows it to be precisely sculpted, before being set in place by bombardment with UV light.

The UV light firms up the liquid and the material forms its own bonds, becoming stable.

From here, the computer printed the resin in a specific lattice formation, similar to honeycomb, designed to mimic the structure of human cartilage.

The layer hardens and, the researchers say, could be used as a shock absorber in future.

To demonstrate how precise the method is, the researchers created various structures out of the shock absorbing material via 3D-printing. This included a tiny, detailed lotus flower and a prototype of a spinal fusion cage.

It could also be made into biomedical implants for joints.

Professor Yakacki whose findings are reported in Advanced Materials is most excited about its possibilities in the spine.

He said: ‘The spine is full of challenges and it’s a hard problem to solve. People have tried making synthetic spinal tissue discs and they haven’t done a good job of it.

‘With 3D printing – and the high resolution we’ve gotten from it – you can match a person’s anatomy exactly.

‘One day we may be able to grow cells to fix the spine. But for now we can take a step forward with the next generation of materials. That’s where we’d like to go.’