A gender non-binary option will be available on census night for the first time this year, while the statistics bureau has revealed plans to also start asking Australians their sex at birth to better measure diversity.

The new standard for sex, gender and sexual orientation released by the Australian Bureau of Statistics on Thursday has been introduced to tackle a data gap on gender and sex diversity of the nation's population. This includes specifically asking about someone's "sex recorded at birth", and a recommendation statisticians use pronouns like "they" rather than "he" or "she" in surveys, to better include transgender, intersex and non-binary Australians in the formal database. 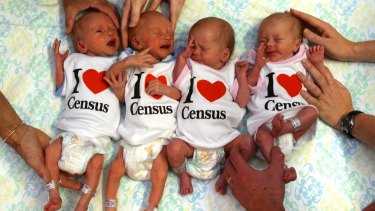 The statistics bureau will provide a gender non-binary option in the census and will start asking about peoples’ sex recorded at birth.Credit:Kirk Gilmour

The 2016 Census counted just 1260 gender diverse people across the nation and the ABS later published a note warning the count of 5.4 sex or gender diverse people per 100,000 surveyed Australians was unlikely to be correct in part due to a lack of information in the answers or a lack of clarity about the way these individuals identified.

The last population survey included an "other" category in addition to the standard "female" and "male" tick boxes, but it was not provided as a standard option. It required a special form or other steps to be taken in order to be counted. The bureau flagged at the time there would need to be more changes to get better and more complete answers during the next census, leading to a standard "non-binary" option being made available.

The new ABS standards apply to a range of surveys undertaken by the statistical body and not just the census. Another recommendation is for future surveys to tell respondents when questions specifically refer "to current gender, which may be different to sex recorded at birth and may be different to what is indicated on legal documents".

One of the challenges facing the statisticians is the terms "sex" and "gender" are commonly treated as interchangeable, which may result in inaccurate statistical responses if it's unclear specifically which term is being referred to. The ABS acknowledged a person's sex, which is based on their chromosomes, hormones and reproductive organs, can change. Gender is defined by the ABS as a "social and cultural concept" relating to identity, expression and experience and can also change over the course of someone's life.

Asking about someone's "sex recorded at birth" is in part intended to limit the proportion of people answering questions about sex with responses relating to gender.

The 2021 census is also going to include new questions on long-term health conditions, such as heart disease, arthritis and diabetes, and will ask about service in the defence force. It will no longer ask about internet access within a household due to a rise in mobile internet use outside the home.

END_OF_DOCUMENT_TOKEN_TO_BE_REPLACED

END_OF_DOCUMENT_TOKEN_TO_BE_REPLACED
This website uses cookies to improve your user experience and to provide you with advertisements that are relevant to your interests. By continuing to browse the site you are agreeing to our use of cookies.Ok