Chilling portrait of a warming world

The bushfires of summer 2019/20. Rapid glacial melt in Greenland. The death of a parent. These destabilising, world-changing events coalesce in The End of Winter, Noëlle Janaczewska’s one-person show starring Jane Phegan and directed by Kate Gaul. 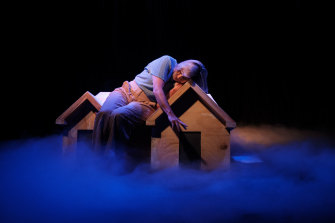 This is a performance essay in the same vein as the trio’s last collaboration, the popular Good with Maps. That show combined Janaczewska’s love for the natural world with a parent’s journey with serious illness.

The End of Winter feels both like a companion piece or even a continuation of Good with Maps: this time, the protagonist is hunting for cold spots rather than the Amazon; this time, she grapples with the loss of a mother.

Both are about complicated journeys. But there is a finality to The End of Winter, in which Phegan’s character flees a world on fire to visit glaciers, research Arctic spaces and manage the incongruity of a British heatwave, which gives it a self-serious and self-conscious weight.

At its best it’s an elegy for the romance of cold and for the imminent loss of seasons. The set (by Soham Apte) shows a house sinking into the earth. Sometimes, Becky Russell’s lights have the windows glow with fire; in other moments, they’re icy blue. Composer Nate Edmonson and co-composer Kaitlyn Crocker guide us gently through the wonder and sorrow of winter.

Jane Phegan is appropriately presentational and occasionally pleasantly conspiratorial – she is clearly comfortable in Janaczewska’s lyrical worlds – but the structure of the work requires her to be both actor and host, and she has a newsreader’s over-articulation and poise that in moments betrays the emotional aspects of the piece.

The End of Winter is still working to find that tonal alchemy where facts and emotions flow seamlessly; it’s a production seeking balance.

But Janaczewska’s wry and curious words already have a little magic. A good chunk of the opening night audience chuckled generously at well-placed asides and showered the piece with generous applause. Maybe for many what matters most is to commune with the cold as we know it before it’s gone.