Images taken by US Cold War satellites have revealed the impact of farming on wildlife in the former Soviet state of Kazakhstan.

Pictures from the American Corona programme show that 50 years of agricultural expansion in the region has negatively impacted ground squirrels.

High-resolution photos from the spy satellites happened across the burrows of bobak marmots, a key species in the ecosystem of the former Soviet republic.

Comparison with modern satellite photos reveals a 14 per cent decline in marmot burrows between 1968 and 2017. 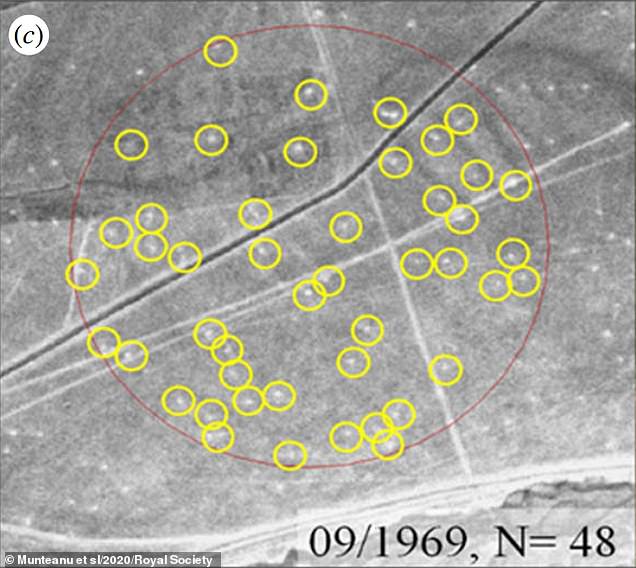 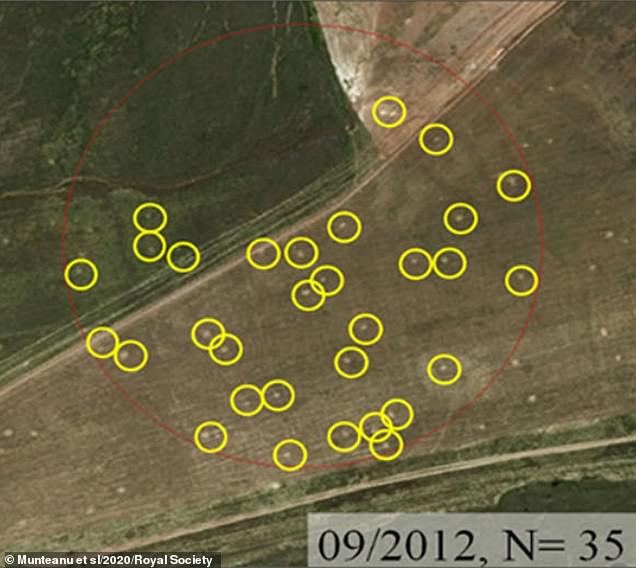 Images taken by US Cold War satellites (left) have been compared with modern looks at the same land (right). Researchers found a decline in the number of bobak marmot burrows in a 23,000 square mile region of north Kazakhstan. Yellow circles are individual burrows 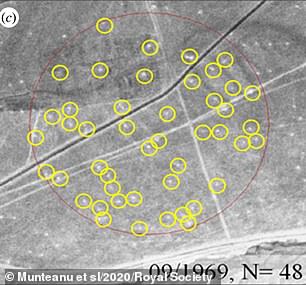 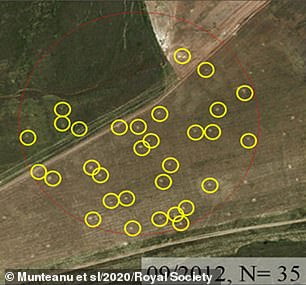 Pictures of what is now modern-day Kazakhstan by the American Corona programme show that over 50 years agricultural growth in the region has negatively impacted ground squirrels. Catalina Munteanu, lead researcher of the study, found the number of marmot burrows has dropped by 14 per cent between 1968 and 2017

Over the last half a century, farmers have expanded their range and infringed upon the natural habitat of the keystone species.

To map the long-term impact of this human expansion, researchers from the Humboldt University Berlin turned to declassified spy images as  an unexpected source of data.

They were taken in 1968 and 1969 by the US as part of reconnaissance missions and declassified in 1996, after the fall of the Iron Curtain and five years after Kazakhstan gained independence.

American intelligence forces were scouring nuclear weapons but the German scientists were not interested in war, they were looking for marmot burrows.

Declassified cold war photographs taken by American U2 spy planes that flew over the Middle East in the 1950s and 1960 have revealed previously hidden archaeological sites.

The black and white photographs, released by the CIA last year, show a range of areas of ancient importance, ranging from sites along the Nile in Egypt to the city of Allepo in Syria and the Assyrian city of Nimrud in modern day Iraq.

The images have revealed details including prehistoric mass-kill hunting traps in eastern Jordan, irrigation systems of the Neo-Assyrian Empire in northern Iraq, and marsh communities in southern Iraq.

Researchers from the University of Pennsylvania and Harvard University used the images, taken from 70,000 feet (13.2 miles / 21km) above the Earth.

The photographs were taken during a mission code-named CHESS and were declassified in 1997, but weren’t digitally scanned or indexed.

Catalina Munteanu, lead researcher of the study, found the number of marmot burrows has dropped by 14 per cent between 1968 and 2017 in this study area area, roughly half the size of England.

This was driven mostly by the conversion of wild regions into arable land. The study found that, over 50 years, grassland was reduced by around six per cent.

In contrast, cropland increased over the study period, but more than a third of the land was still fallow or abandoned.

The researchers say the land was rapidly converted to farmland following crippling food shortages in the wake of World War Two.

In the regions of the 23,000 square mile study area that were converted to farmland, burrows declined by around 60 per cent.

As well as revealing the loss of biodiversity, the study also found that marmots are homebodies and live in the same burrows for several generations.

‘I was really surprised to find that the marmots were using the exact same burrows for half a century long,’ Dr Munteanu told New Scientist.

Marmots only have a lifespan of around six years, which means around eight generations of the animals lived in the same burrows.

The full findings are available in the journal Proceedings of the Royal Society B.