Has Nigella slipped up with her latest lockdown dish? First episode of Cook, Eat, Repeat sees Lawson use old banana PEEL to make a curry – as even she admits it might ‘traumatise’ home chefs

Nigella Lawson’s latest television cookery show for BBC2 appears to have taken resourcefulness to a new level – with the first episode’s finale featuring a curry recipe made using bits of old banana peel.

While many were impressed by Nigella’s creativity with using leftovers as they tuned in to watch Cook, Eat, Repeat, which aired on Monday at 8pm, others couldn’t quite fathom a curry made with the skins of over-ripe bananas.

Even Nigella herself, who recently denied she’s a domestic goddess, appeared hesistant about the Indian dish, tweeting after the show aired at 8pm: ‘I hope I didn’t traumatise you too much with the banana skins (I promise you the curry is divine).’ 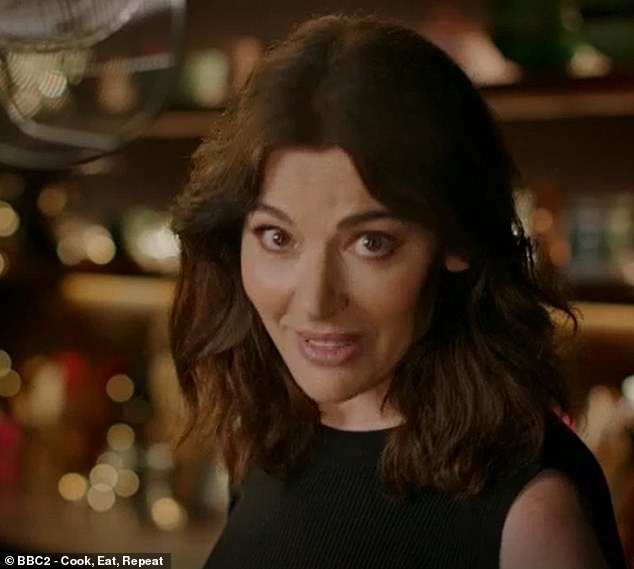 Nigella Lawson returned to screens with new BBC2 show Cook, Eat, Repeat at 8pm on Monday…her lockdown inspired dishes looked to use leftover ingredients and simple staples, with a banana skin curry and fish finger bhorta on the menu 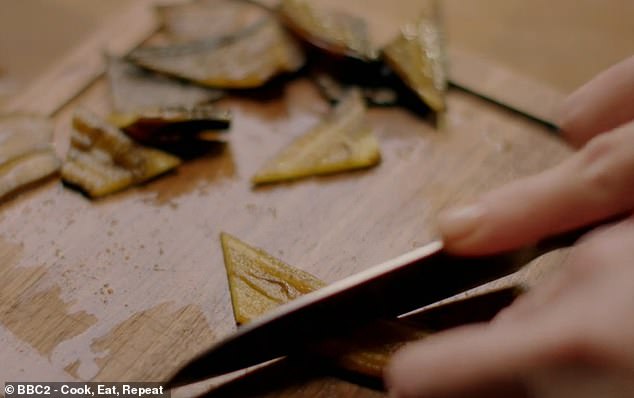 After using the flesh of over-ripe bananas for a tahini cake, Nigella turned her attentions to the skins, chopping them up to add to a coconut curry – much to the bemusement of many viewers 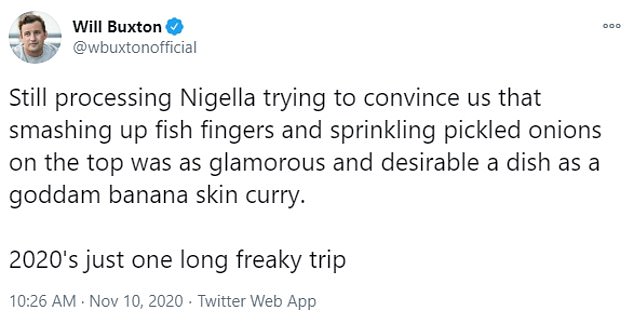 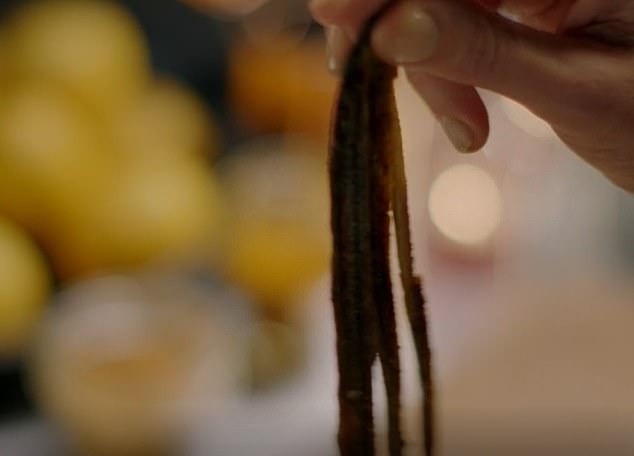 Spooky! Nigella compared the shredded skins of the yellow fruit to ‘like eating Klingons’, referring to the characters from Star Trek

During the show, wide-eyed viewers watched Nigella boil, chop and shred the peel, comparing the skins in the finished dish to ‘like eating Klingons’, a reference to the famous Star Trek characters.

Encouraging home chefs to be more inventive with leftovers, she created a chocolate tahini pudding with the flesh of overripened bananas…before saving the skins from the food recycling bin and pressing on with the unusual recipe.

After boiling them in a pan of water, Nigella said the softened skin of the bananas would add ‘texture’ to a curry and were similar to the skins of aubergines when softened.

However, not many were convinced they’d reach for the fruit bowl when next making their next spicy lockdown dish. 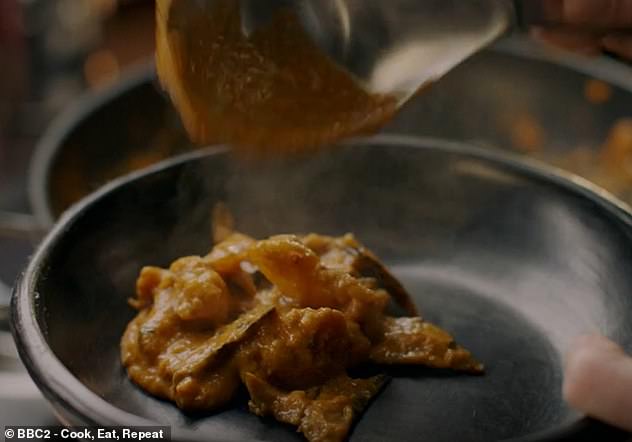 Plating up: the soaked banana skins add ‘texture’ to the dish, the telly cook claimed 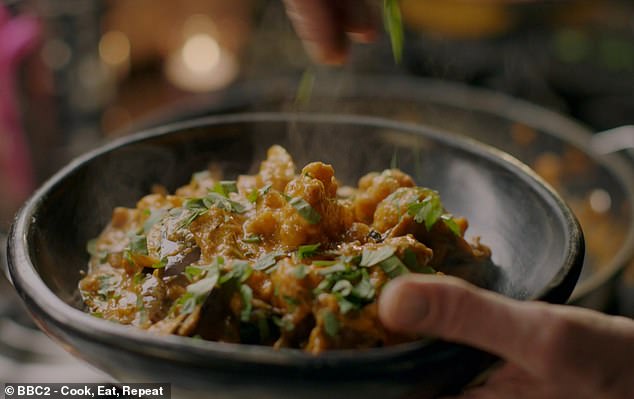 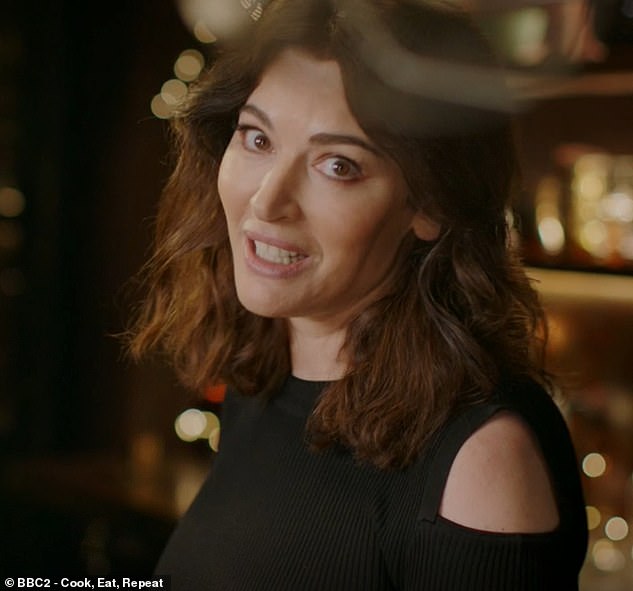 Nigella said the dishes in her latest show were: ‘Food to brighten up even the darkest day’ 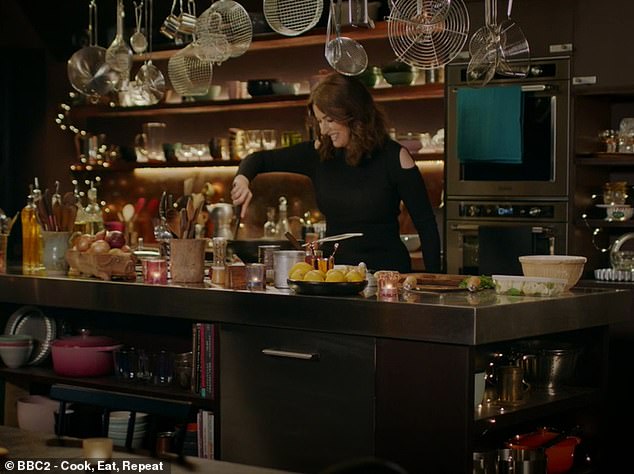 @wbuxtonofficial piped up: ‘Still processing Nigella trying to convince us that smashing up fish fingers and sprinkling pickled onions on the top was as glamorous and desirable a dish as a goddam banana skin curry. 2020’s just one long freaky trip.’

@OddSocksAlex added: ‘I genuinely feel a bit sick at this banana peel curry recipe on Nigella.’

@prateekbuch penned: ‘Banana skin curry? My Gujarati parents (dad more than mum) used to make this as frequently as my ridicule would allow – as I’m older and hopefully wiser, I admit to being at least curious enough to try…’

Nigella started the show with a fish finger bhorta, adding the very British quick dinner staple to the Indian subcontinent meal of fried and mashed vegetables.

She told viewers that the premise for her latest telly outing was: ‘Food to brighten up even the darkest day.’

Cook, Eat, Repeat airs on Mondays on BBC2 at 8pm, and is available to watch on the BBC iPlayer

END_OF_DOCUMENT_TOKEN_TO_BE_REPLACED

END_OF_DOCUMENT_TOKEN_TO_BE_REPLACED
This website uses cookies to improve your user experience and to provide you with advertisements that are relevant to your interests. By continuing to browse the site you are agreeing to our use of cookies.Ok