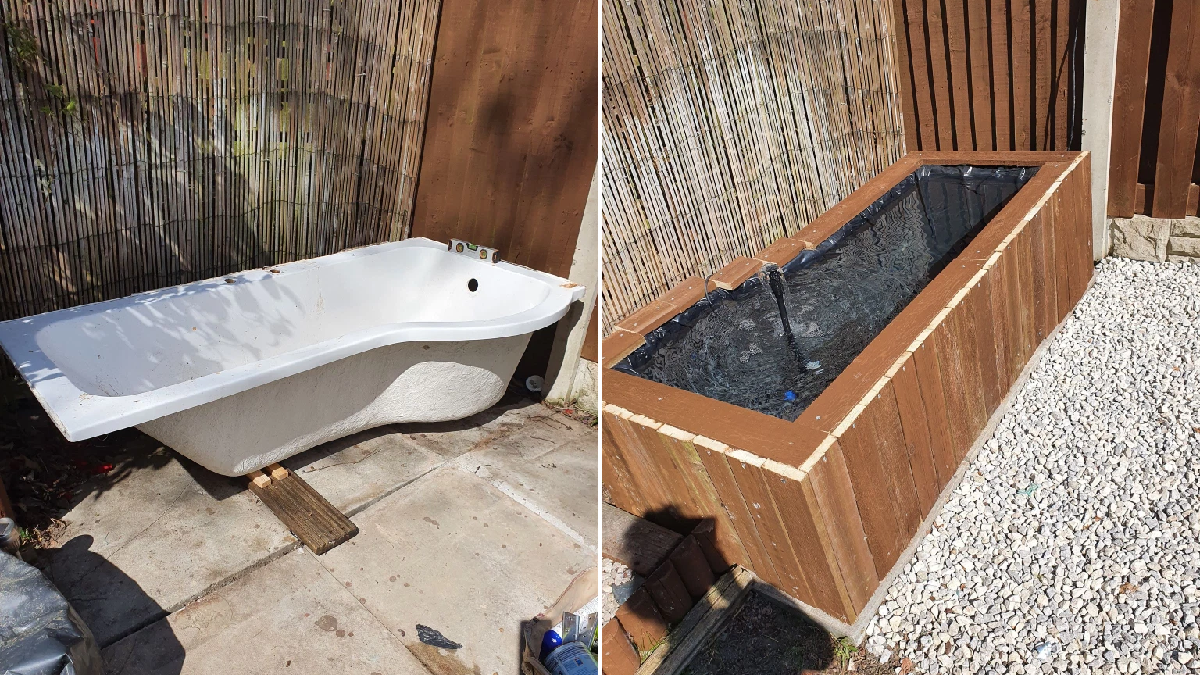 Not sure what to do with your old bath tub after a renovation? Well one couple has discovered the perfect way to transform your old tub into a garden feature.

Rachel Ball, 27 and her partner Kieron, 33 avoided the hassle of having to dispose of their old bath by turning it into a stylish new pond.

The pair were getting rid of the bath after a hole was put in it by accident. The unsightly tub had been in the garden for more than 8 months, but the cost to get it removed seemed too high.

‘I contacted a removal service, who wanted to charge between £60 and £80 to remove it,’ Rachel told LatestDeals.co.uk.

‘Me and my partner wondered if it was possible to make a pond. Our daughter’s birthday was coming up, and she had been asking for pet fish. However, I didn’t like the idea of a fish tank as we don’t have much space for one in the house.’

As luck would have it, another mishap meant the savvy couple already had a head start on some of the materials they would need to build the pond.

‘Last January and February, we had severe winds which had left us with fence panels that had blown through,’ says Rachel. ‘We decided to use these as a base and frame for an upcycled pond.

‘I made a pond guard out of some old Dado rail and garden netting from the shed. Then I looked for a fish pump on Facebook Marketplace, and came across one for £30.’

The process of creating the pond took three days in total.

‘We placed the old bathtub in the top garden, where there were already slabs,’ says Rachel. ‘I removed the front two slabs and replaced them with some decorative pebbles from the front drive.

‘Our old swimming pool had burst and it was lying around in the shed, so we used this as a protective sheet for the hole and plug.

‘We tried using Visqueen for the pond lining, which we already had in the shed. The hose pipe wasn’t long enough so we connected it to the jet wash and balanced it so we could fill it up.

‘Unfortunately the next morning it leaked, so I rang up my local garden centre and they helped me with getting a pond liner, which was £22.99.

‘After we put the liner in, we built the top frame and started the front paneling. Then we secured the panels with an additional piece of wood.’

The final result is an attractive water feature at the bottom of their garden – which is much nicer to look at than their old, damaged bath tub.

Creating a pond can be pretty expensive, so repurposing old items – like a bathtub – is a great way to get the project done on a budget.

Do you have a story to share? We want to hear from you.

Get in touch: [email protected]