Dave Bautista is on the hunt for a person in Florida who did horrific things to a puppy.

Earlier this month, the “Guardians of the Galaxy” actor published an Instagram post that included several disturbing photos of an American Staffordshire terrier named Sage. 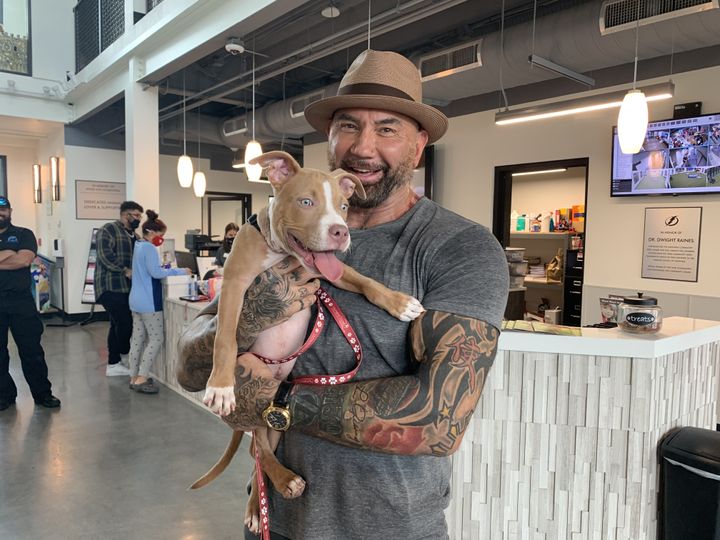 In his post, which includes several disturbing photos of Sage, who was severely abused, Bautista did his best to offer the young pup justice.

“I will personally hand $5000 cash to the person who gives information leading to the arrest and conviction of the sick piece of shit responsible for this,” the former professional wrestler wrote, including points of contact. He also noted that the Tampa Bay Humane Society was offering an additional $1,500 reward.

“Sage came to us after she was found by a good samaritan in a cemetery eating trash,” Maria Matlack, director of marketing for the Tampa Bay Humane Society, told HuffPost via email.

“She had an awful open wound on her neck with a chain embedded in her skin with a chain dangling,” Matlack added. “It was very disturbing.”

Luis Safe, founder of SafeK9 Tampa, a dog training and concierge service that works with Bautista and put the actor in contact with the Human Society, explained to HuffPost over the phone how severe Sage’s injury truly was.

“When a dog has an embedded chain, they’re literally growing into the chain,” Safe said. “So she had to be in the chain for at least a couple of weeks.”

Matlack added that the rescue group had to perform emergency surgery right away to remove the chain from Sage’s body.

Last Friday, Bautista informed his 3.6 million Instagram followers that they had not yet tracked down Sage’s abuser, but he also offered a bit of levity. The “Dune” actor announced he had adopted Sage and had renamed her Penny. In the post, he showed off the now healthy and happy dog.

Joey Santiago, manager at SafeK9 Tampa, told HuffPost over the phone that Penny joins the “Army of the Dead” star’s two other rescue dogs, Maggie and Ollie, whom he adopted through an organization called Pitbull Mafia of South Tampa.

On Tuesday, Bautista posted a video of Penny “living the puppy dream.”

“Please don’t make her story an exception,” Bautista wrote, encouraging his followers to take in injured dogs in need of loving homes.

Matlack revealed to HuffPost how dramatic Penny’s transformation was after she received surgery and a little TLC, noting that she was “very frightened and a bit shy when she first came to us.” But Matlack said the Humane Society knew Penny was special because, “despite being in so much pain” when they first began examining her, “she started to wag her tail.”

Post-surgery, Matlack said Penny “was like a completely different dog.”

“You wouldn’t even be able to tell she’s gone through so much if you don’t look at her scars.” 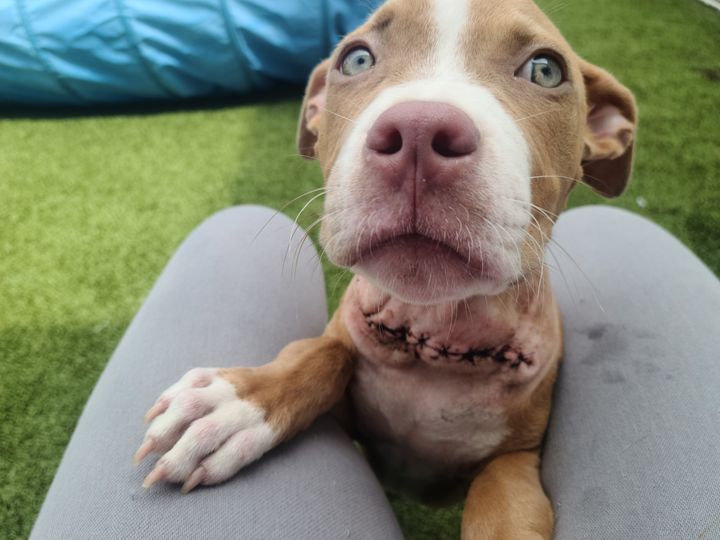 And although Bautista and the Humane Society are still trying to find the person who hurt Penny, Matlack looks at the dog’s very short but troubled life as having somewhat of a “fairy-tale ending.”

“She went from eating trash out of a cemetery with a chain embedded in her neck to leaving our shelter in a Rolls-Royce in just a matter of days,” Matlack  said.

If you have any information about Penny, you’re encouraged to reach out to SafeK9 or the Humane Society of Tampa Bay.