DEBORAH ROSS: Black Narcissus is all so sinfully slooow, sister

Black Narcissus is based on the novel by Rumer Godden and was famously filmed by Michael Powell and Emeric Pressburger in 1947, starring Deborah Kerr, but what that told so successfully in under two hours, this doesn’t manage in three.

This was soooooooo slooooooooow. It’s a narrative about cloistered sexuality, and at various times you wanted to shout: can we uncloister the sexuality now? Get it all out in the open? And call it a day?

Here, Gemma Arterton steps into Kerr’s shoes as Sister Clodagh who, in 1934, is dispatched with other nuns to establish a convent school in an all but deserted old palace high on a mountainside in a remote outpost of the Himalayas. 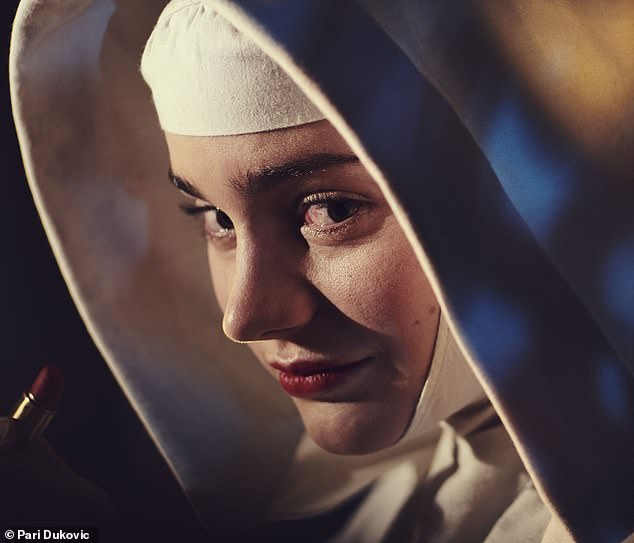 Mr Dean’s main job is to stir the loins of the sisterhood. Not only Sister Clodagh but also Sister Ruth (Aisling Franciosi, above), who had been skating on thin ice mentally since the get-go

Clodagh is sent there by Mother Dorothea (the glorious Diana Rigg in her penultimate role), and it is not a hospitable place. It’s not a place where the hills are alive with the sound of music, for instance.

It’s not a place where anyone’s favourite thing is brown paper packages tied up with strings. It’s not that kind of place, and these aren’t those kinds of nuns, and this isn’t that kind of story.

Instead, the palace is perched on an outcrop where the winds are strong and windows rattle and doors bang and the bell tower has no railings – many edges to fall off, literally as well as metaphorically – and with The Cello of Dread, as I call it, playing constantly on the soundtrack.

An atmosphere should slowly build. But this is dread from the off – the first scene is of a storm and lightning cracking – and then it’s three hours of dread across three nights.

And if it’s dread non-stop, then what you can’t have is any taut suspense. It’s just more of the same.

Back to the action. Or what there was of it. Once Clodagh arrives, she finds she has to deal with handsome, manly Mr Dean (Alessandro Nivola), clerk to the local general.

(As seen in the prologue. And then over and over, rather unnecessarily.)

Sister Clodagh does not want to seek help from Mr Dean – her sin is pride – but has to if she is ever to get ‘the water closet’ fixed, for example. I am not given to prayer myself but was praying she’d ask him to fix railings to the bell tower, and a handrail to those steps but no joy.

His main job, anyway, is to stir the loins of the sisterhood. Not only Clodagh but also Sister Ruth (Aisling Franciosi), who had been skating on thin ice mentally since the get-go.

However, as there is no sexual chemistry between him and them – not a squeak, not a whisper – this love triangle never especially convinced.

Clodagh is given a backstory, with fleeting images of a love affair that went wrong before she took up holy orders, whereas Sister Ruth goes mad (essentially) without explanation.

And because the pacing was off, it all became quite repetitive. So much so that when Gina McKee turned up in the final episode (as Sister Adela) I was overjoyed. A new nun! At last!

So it was all underpowered, and perhaps rather pointless – what does it say that the film does not? – but it did also have its virtues. The performances were uniformly good.

Arterton skilfully portrayed a woman who comes to realise that everything she believed to be right was wrong, while Sister Ruth’s increasing lunacy was well handled by Franciosi.

This was also stunning to look at. Unlike the film, which was shot at Pinewood, this was shot partially in Nepal and the cinematography was terrific. That said, I won’t be booking a holiday at that old palace soon. And I’d want railings. Lots of them.

I got through the first episode of The Serpent but failed to see how anyone would want to watch the next seven. (Seven!) It is based on the real-life serial killer Charles Sobhraj – played here by Tahar Rahim – who, across Asia in the mid-1970s, and abetted by his girlfriend (Jenna Coleman), murdered backpackers travelling the ‘hippie trail’. 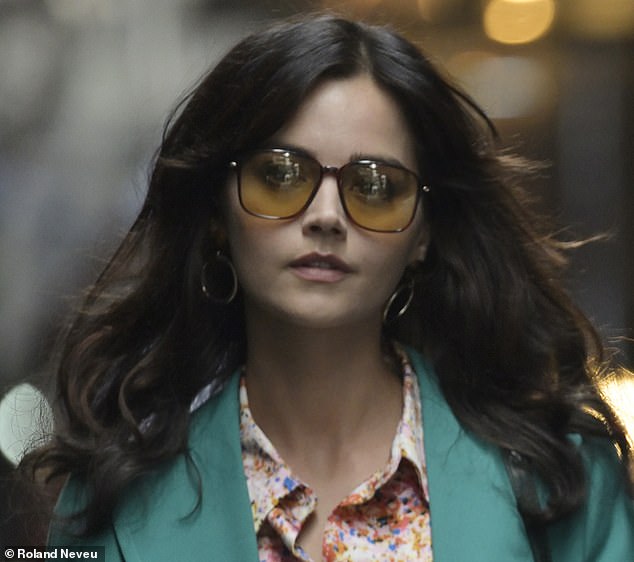 It is based on the real-life serial killer Charles Sobhraj who, abetted by his girlfriend (Jenna Coleman, above), murdered backpackers travelling the ‘hippie trail’

With its brown and orange haze and the incorporation of vintage cine footage, it is spot-on visually, and captures that era really brilliantly, which is how it earned its two stars.

But it was also confusing – so much hopping back and forth in time, I often couldn’t remember if we were back or forth – and serially unpleasant.

If a point was being made by seeing a young woman conned, drugged, dragged from a car, tossed into the sea and drowned, then I failed to work out what it was. There’s no whodunnit element, even if a young Dutch diplomat is on his tail, and the thought of having to sit through seven more hours… no. I can’t.