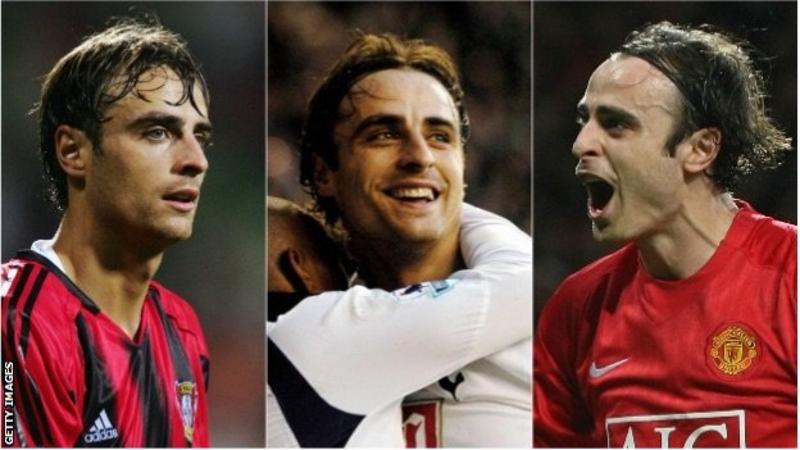 Dimitar Berbatov was often viewed as lazy during his time playing in England. What his critics didn’t know was that this was all a part of the striker’s plan.

In a wide-ranging interview with BBC Radio 5 Live, the former Tottenham and Manchester United forward revealed that his languid playing style was in fact a ploy to lull defenders into a false sense of security.

With 94 goals in 229 Premier League games, it would be fair to say that it often worked.

During his conversation with former team-mate Jermaine Jenas, who described the Bulgarian as “one of the best players I’ve played with”, Berbatov also touched on his time at Bayer Leverkusen, Tottenham and Manchester United, why Harry Kane could have a similar transfer dilemma to the one he faced and his potential plans to move into coaching.

Berbatov on… being lazy

He was known for his technical ability and composure, but not for his bustling physical style – qualities that often led to people suggesting he did not work hard enough…

Everybody is different in the way they see the game and play. My difference was that sometimes you would see I might not be into the game but at the same time I was scanning the pitch to see where to position myself at the right moment, at the right time in a pocket of space, and you can give me the ball so that I have more time to myself and not have someone on my back.

When I have that time and space I have more time to think about where to put the ball.

Some people don’t understand it, but if you are clever in your head, even if you are slow in speed, you can still be quick. You can position yourself better and be even more use to your team.

If you were to put it into order of the players who would run in my Tottenham team I would say Jermaine, Keane (Robbie Keane) and then probably everybody else, with me behind.

But I was running in my head. And when I see someone in a better position than me I always give the ball. No selfishness. In the end we win and lose together.

It seems a bit strange but in every team I have been in, you see my style of play, and sometimes fans and payers don’t understand that and they become a bit afraid of it – like I am not helping and not good for the team.

But after a while you get used to it because this style can bring results.

Berbatov on… moving to the Premier League

When you are a young boy you think you know everything so I am expecting big teams like Barcelona or Real Madrid to come after me. My agent he says to me ‘well, none of these teams are coming after you at the moment so cool down’.

He tells me Spurs want me. Honestly, I did not know a lot about the Premier League and Spurs then because I was concentrating in my own world in Germany, but I started following Spurs to see how good they are. And my agent tells me, this is the time now to leave and join them.

I needed to adjust myself for the speed of the Premier League and the physicality of it. I saw players I had never seen in the Bundesliga, like body building, and I was thinking ‘what is going on?’ I knew I needed to use my brain even more. It was a challenge.

I needed a few months to feel ready and for my team-mates to accept me. I was a bit shy, not talking too much.

My relationship with Keano (his strike-partner)… we didn’t speak much but our understanding on the pitch, I can’t really explain but it just clicked.

His move to Old Trafford was a controversial one, coming very late on deadline day in September 2008, although the fee of £30.75m did net Spurs a tidy profit…

I am coming from a small country, from Bulgaria. I am hoping to play my whole career in England with just one team but it is not the case. I needed to work, to sign my letter of success, starting from back home, then in Germany and England.

Spurs gave me the opportunity to show what I can do. The final step on my mountain of success was United.

When they came I knew I would make people disappointed, especially the Spurs fans. But I was following my own path and I know that if I miss that chance another will not come like that. This is how it is in football.

Everybody was so welcoming and even if you don’t speak much you can still learn. They had players that had been champions and won the treble and I was like ‘Berbs, I have finally made it’. This is what I had worked to all my life.

I was happy, but I was ‘what am I doing here?’. Like a kid. This can sometimes stop you showing what you can really do.

Sir Alex [Ferguson, the then United manager] was great to everybody. He knew how to stick with everybody individually – some you have to be gentle with, some tough with. He knew how to do that.

Even he never told me that I needed to change. This was a good thing. He trusted me in his own way.

The sad thing in football is that, because it has been established a long time ago which the big clubs are, you will always have that situation with teams like Spurs where their best players have to decide if they stay here or move to a big club.

It is exactly the same with Harry Kane at the moment. He is going to be at a crossroad, thinking ‘what do I do now?’.

The situation is maybe difficult now because of coronavirus and the money, but he is in exactly the same situation I was in. In his head sometimes he is maybe not in the right place.

My head was not in the right place at times. How can it be? I don’t want to put my team in a position where I go late in the window and leave them without a replacement. But it will happen after me many times, with many players.

The most painful part is that Spurs’ last trophy was when me and Jermaine where there. It will be stated over and over again and make people angry that the lack of trophies is the main problem for players like Kane, who is captain of England and not getting younger.

But when he gets older he wants to say to his kids: ‘Look what I won’.

He retired last year following spells with Fulham, Monaco, POAK and Kerala Blasters in India and now, aged 39, is considering his next career move…

It is not going to be easy. As all football players think, we are all going to be great coaches, which is of course far away from the truth.

I have my A licence already and am going to go for my pro licence later this year hopefully.

You never know. I would at least like to be prepared for the future, whatever that may be. If that is as a coach I know I will be prepared.

At the moment though I am spending more time with my kids and family.