Disability home operators frustrated by the pace of the COVID-19 vaccine rollout are trying to book their residents into GPs for immunisations as the federal government admits only 6.5 per cent of this vulnerable group have been inoculated.

It came as the new military head of the government’s vaccine operations committee, Navy Commodore Eric Young, said he was focused on fixing issues with the rollout, after what one bureaucrat described as a “slow start” in aged care that was now gathering speed. 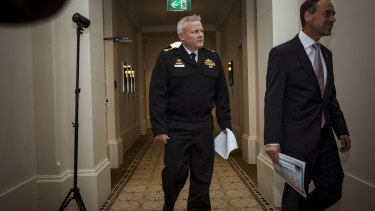 Federal Health Minister Greg Hunt said on Tuesday more than 1.7 million doses had been administered across the country, with 115,000 of those given to aged and disability care residents and staff.

“That’s a six-fold increase in total vaccinations in four weeks since the GP rollout, or phase 1b, began,” he said. “So that acceleration which was predicted has occurred … That is an extraordinary achievement.”

Australia’s more than 6000 disability homes were to be among the first to receive vaccinations under phase 1a of the plan released by Mr Hunt in January. But a parliamentary COVID-19 committee heard on Tuesday that just 93 group disability homes – or about 1500 of the 25,000 residents – had received their first vaccinations.

“This is absolutely unforgivable,” Labor’s National Disability Insurance Scheme spokesman, Bill Shorten, said. “There is a pathology of dangerous incompetence at the core of the Morrison government’s treatment of vulnerable Australians.”

Department of Health associate secretary Caroline Edwards conceded the disability-care rollout had been slower than planned. “The initial slow start in aged care residents required us to pivot to make sure we focused on them,” she said on Tuesday.

Frustrated by the pace of the rollout, one major disability service provider, Able Australia, said it was trying to book its disabled residents into local GPs but had had no success so far.

Able runs 43 group homes in Victoria, Queensland, Tasmania and the ACT, with about 450 residents. “Not one has been vaccinated,” Able’s engagement director, Chandi Piefke, said. “These are people with compromised immune systems. “They are one of our most vulnerable groups.”

Of Able’s 600 support staff, only a handful had had shots and these were privately organised.

“Like every other provider we have received no notification of when they are going to roll out vaccinations,” she said. “We were told we were the first priority. We have not heard of a single provider having a different experience to us.”

Ms Green said she appreciated that getting to thousands of disability homes across Australia was a complex logistical task. “But there is no one contacting us saying ‘How would we do this?’ They are coming out with half-baked ideas,” she said.

Under the government’s initial plan, more than 500,000 vulnerable disability and aged care residents and staff were to be vaccinated in the six weeks from late February.

Many of the 318,000 workers in the aged care and disability sector may now need to get the Pfizer vaccine after the Australian Technical Advisory Group on Immunisation recommended it should become the preferred vaccine for people aged under 50.

On Tuesday, health officials said they were reviewing the vaccination plan for residents of disability homes.

Despite the delays, Department of Health secretary Brendan Murphy said he was confident the residential-care rollout would be finished soon. “It will certainly be finished in May,” he said. “It’s going extremely efficiently now.”

Commodore Young said the vaccine operations committee had one job: “To make sure that we can get the vaccines that we have available around the country when and where they’re required to protect our most vulnerable Australians.”

To do that, he said it had three areas of focus: helping to get vaccines distributed across the country, planning for changes to the rollout plan, and refining and improving those processes. “We continue to improve our processes,” he said.

From Wednesday, Victorians eligible under phases 1a and 1b of the rollout will be able to receive the AstraZeneca vaccine at mass vaccination centres at the Royal Exhibition Building, the Melbourne Convention and Exhibition Centre and the former Ford factory in Geelong.