Formula One of the SKIES: Two flying race cars compete in a DRAG RACE in the skies over Adelaide for the first time ahead of their manned race debut in 2022

A pair of flying race cars have been pitted against one another in the skies over Australia, as part of a test ahead of a new manned race series starting in 2022.

Travelling at a whopping 96 miles per hour, the two Alauda Aeronautics Mk3 Speeders were remote controlled as they sped down a 650ft long drag strip.

Organised by Airspeeder, the drag race was a test in the skies over Adelaide to demonstrate the potential of a new event called the EXA Series.

When the series gets started next year, the electronic Vertical Take Off and Landing (eVTOL) vehicles will have a pilot on board, but that requires the launch of the Mk4.

‘EXA is extreme, close proximity racing that drives us towards piloted flying car Grand Prix’s,’ Airspeeder wrote on its website. 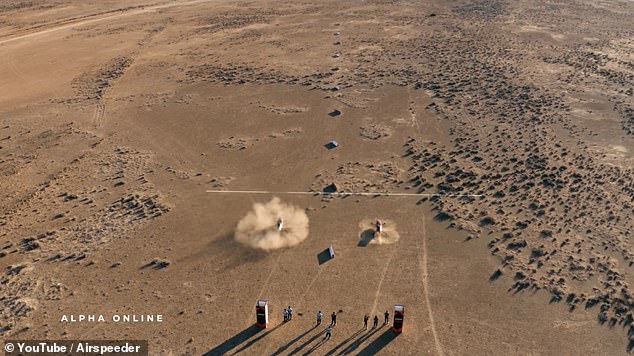 A pair of flying race cars have been pitted against one another in the skies over Australia, as part of a test ahead of a new manned race series starting in 2022 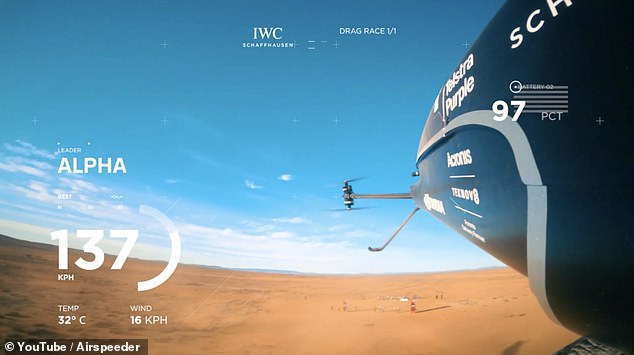 Travelling at a whopping 96 miles per hour, the two Alauda Aeronautics Mk3 Speeders were remote controlled as they sped down a 650ft long drag strip

Electrical vertical take-off and landing (eVTOL) is a type of aircraft that can hover, take off and land vertically.

Often made from drone-like quadcopter technology, they can be manned or unmanned.

Advances in battery technology, electronic controllers and motors made them possible.

The move to develop this type of flying vehicle was driven by a new for new types of urban vehicles, particularly the idea of airborne taxis.

As well as startups like Joby, Alauda and Jetson, major aircraft companies are also working on eVTOL vehicles.

NASA is engaged in an extensive project to determine standards required for these vehicles to operate in a city centre.

In the video, pilots and crew can be seen standing at the start line, remote controls in hand, as dust plumes erupt around the multicopters.

The 220lb flying vehicles are made from carbon fibre, and can be seen going from take off to crossing the finish line in matter of seconds.

The current generation of Alauda flying vehicles require a remote pilot, but the next generation will have someone in the cockpit controlling it directly.

They accelerate from zero to 62 miles per hour in just 2.3 seconds, which is on par with the Ariel Atom 500 and faster than the Bugatti Chiron.

The company is working hard to build the Mk4 version of the its racer, which will be the first to operate with human pilots, but first they need to create a ‘force field’.

This would used LiDAR and other radar technologies, and would be completely virtual, used to signal to another flying car that they are ‘too close’.

It would surround the car and force them to move, while also still allowing ‘close quarter motorsport action.’

‘Both the remotely piloted Mk3 programme and manned Airspeeder Mk4 flying cars will provide a safe environment from where key innovations around safety.’

These innovations will include developments in including refinements to noise and batteries that will be fed into the wider development of a new industry.

The electronic vertical take off and landing industry has been predicted to be worth more than $1.5 trillion by 2050 by analysts Morgan Stanley.

There will be an inaugural unmanned season, where elite pilots will take to the skies to race prop-to-prop while navigating electronically governed racetracks in the skies above some of the most visually arresting scenery in the world. 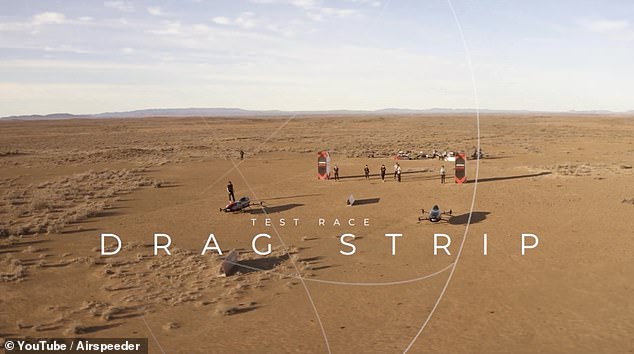 When the series gets started next year, the electronic Vertical Take Off and Landing (eVTOL) vehicles will have a pilot on board, but that requires the launch of the Mk4 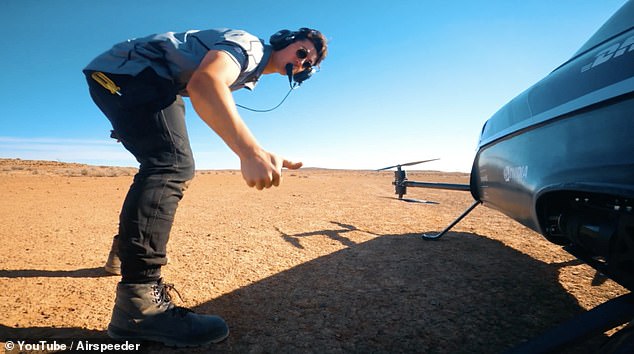 ‘EXA is extreme, close proximity racing that drives us towards piloted flying car Grand Prix’s,’ Airspeeder wrote on its website 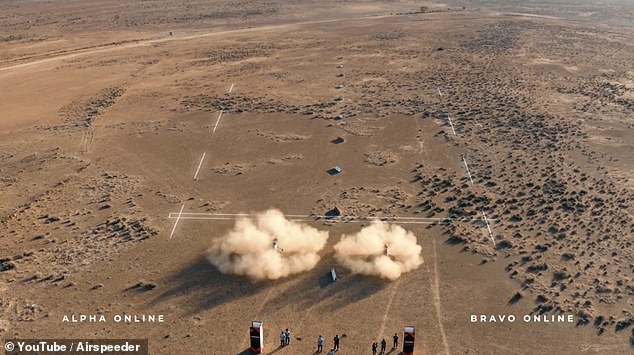 In the video pilots and crew can be seen standing at the start line, remote controls in hand, as dust plumes erupt around the multicopters

The second race season, in 2022, is expected to make use of the Mk4 copters, putting a pilot in the cockpit for the first time.

While the race and flying vehicle is exciting, the firm says the goal is to accelerate the development of a ‘mobility revolution’.

‘The next generation sport plays the same role the pioneers of Formula One did nearly a century ago in driving technical development and building public acceptance for a new mobility revolution.

According to Alauda Aeronautics the Airspeeder Mk3 is a ‘giant technical leap’ in the development of the world’s first racing series for electric flying cars.

This remotely-piloted vehicle is the final iteration of an electric flying racing car before the introduction of manned racing craft, the Airspeeder Mk4, due to debut in 2022.

The craft, which will be operated by an expert remote operator from the ground, features a suite of technologies and engineering elements never before seen on an eVTOL craft.

These innovations will be validated in this key unmanned proving phase and include LiDAR and Radar collision avoidance systems that create a ‘virtual forcefield’ around the craft to ensure close but ultimately safe racing.

The Mk3 features a carbon fibre frame and fuselage chosen for its strength, stiffness and lightweight properties, which ensures manoeuvrability, performance and efficiency.

The carbon fibre frame and fuselage adds a vital mechanical layer of safety, which will be further enhanced by a full carbon fibre monocoque body to be introduced on the Mk4 vehicle.

The MK3 powertrain represents a significant upgrade on the Mk2 proof of concept vehicle, with power increased by 95% with only a 50% increase in weight.

A 96 kW electric powertrain already sees the Mk3 operating with a thrust to weight ratio above two, on a craft that weighs just 100KG unmanned. The Mk3 speeders will fly at speeds in excess of 75m\h.

The Mk3 speeders are laid-out in an ‘octocopter X formation’. This provides significant advantages to pilots in terms of maneuverability and stability.

When racing the pilot will be able to make the same sharp hairpin style turns as a Formula 1 car but with the added third dimension of being able to move vertically.

The octocopter configuration also adds an important measure of vehicle redundancy and will ensure the craft can safely land and remain in control should a rotor or battery system fail.

To facilitate this, Alauda’s engineers have developed an innovative ‘slide and lock’ system for the rapid removal and replacement of batteries when on the ground, this technology debuts on the Mk3.

A strategic layer is added to the sport with this approach as teams will be able to adapt battery strategy depending on the dynamic requirements of that particular section of the race.