Flash flooding is emerging as a growing natural disaster threat for Australia as the recent State of the Climate report warns Australia’s weather is becoming more chaotic and heavy rainfall bursts will continue to intensify, driven by rising temperatures.

The report, authored by CSIRO and the Bureau of Meteorology, found climate change would cause “an increase in the risk of natural disasters from extreme weather”. 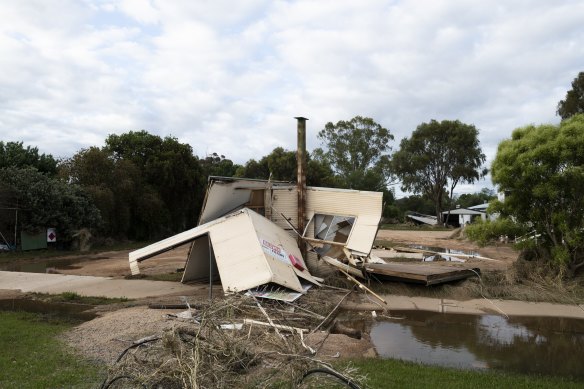 Flash flooding in Eugowra earlier this month washed houses off their foundations.Credit:Rhett Wyman

Australia’s average temperature has risen 1.47 degrees in the past century, which means cloudbursts of increasing intense rainfall are more likely as warming continues, since the air can hold 7 per cent more moisture for every degree increase in temperature.

Risk Frontiers climate scientist Stuart Browning said floods create the most financial damage of any natural disaster, but it was extremely difficult to predict where flash floods would occur.

“Climate systems warming, and air mass as a whole holds more moisture, so when it rains, we’re going to get more rain, but pinpointing exactly where that’s going to happen is really, really hard,” he said.

“Oftentimes, even the Bureau of Meteorology weather forecasts, right, up until a day or so before an event, are still fairly vague about where we’re going to get the most intense rainfall.”

The State of the Environment report said atmospheric warming was driving “more intense short-duration heavy rainfall events, even in regions where the average rainfall decreases or stays the same”.

“This will lead to a complex mix of effects on streamflow [rivers], and associated flood and erosion risks, including increased risk of small-scale flash flooding.”

In another report, scientists at the ARC Centre of Excellence for Climate Extremes found extreme cloudbursts and heavy rain have intensified by at least 40 per cent over the past twenty years.

Former NSW Fire and Rescue Commissioner Greg Mullins said in an opinion piece for this masthead that Australia had hit a “frightening new era” of climate-driven disasters and Australia’s planning, management and recovery systems are being “regularly overwhelmed”.

Mullins, a member of the Climate Council, launched the organisation’s Australia’s new era of unnatural disasters report, which said the insurance claims from flooding and storms that hit south-east Queensland and coastal NSW in February and March totalled $5.56 billion, making it Australia’s most expensive weather event, with more than 236,000 claims.

“Our reliance on outdated risk scenarios and models caused an underestimation of risk to some communities this year,” Mullins said.

“This month, the Lachlan River rose faster than anybody expected. One in five residents of Forbes and Eugowra needed to be rescued.”

The chief executive of the Commonwealth Natural Hazards Research centre, Andrew Gissing, said climate science showed greater flash floods were coming and all levels of government should work together to enhance warning systems, even if the location and timing of such events is hard to pinpoint.

“Flash flooding means the community doesn’t have time to prepare,” Gissing said, “but we know that even a short period of warning by an alarm system in town, for example, can be immensely valuable in reducing loss of life.

“An hour’s warning of a flash flood can reduce the loss of life by 90 per cent, based on studies of US dam failures”.

Cut through the noise of federal politics with news, views and expert analysis from Jacqueline Maley. Subscribers can sign up to our weekly Inside Politics newsletter here.