Home » Lifestyle » From the Archives, 2006: A story of hope and fish, the Games open in Melbourne

From the Archives, 2006: A story of hope and fish, the Games open in Melbourne

A story of hope – and fish 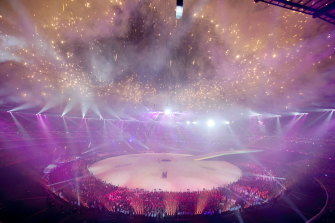 There must have been a time in the early chapters of the Commonwealth Games when the opening ceremony was presented as a far simpler and formularised affair, a triumphantly militarist set piece, a parade of soldiery, flags and athletes, conducted in the presence of the monarch and intended to set the spheres of competition rolling – while also demonstrating the breadth and subtly flexed power of empire.

None of which was traditionally likely to involve ducks, trams or small children, but then the modern Games opener requires more than bagpipes, bearskins and a volley of muskets for its effect.

The modern opening ceremony – a distinct, though still thankfully rare, dramatic form – is a complex and demanding beast: an ostentatious display of a host city’s capacity to direct civic resources that might otherwise have fed, transported, policed, clothed or educated its population towards a piece of only dimly comprehensible open air theatre; a lavish one-off production that invites its audience to suspend disbelief in everything other than the transporting power of pyrotechnics, nobly aired platitude and colourful, massed amateur performance.

Each host city must stage something bigger, louder, brighter and smokier than its predecessors . . . which in this case pits Melbourne against the likes of Manchester, Cardiff and Brisbane, so the bar is not insurmountable. 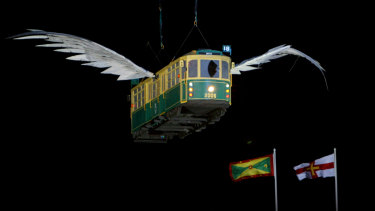 Photos from the rehearsal of the opening ceremony for the 2006 Melbourne Commonwealth Games.Credit:Dallas Kilponen

And how did Melbourne rate? Well, we may have lacked a vast child-stuffed kangaroo, but we did have several species of waterfowl, fish and a koala in its underwear. There was no Kylie, just Delta Goodrem (Kylie Lite), Dame Kiri and Steve Kilbey.

Where Sydney’s Olympics had the thundering hooves and flicking manes of the men from Snowy River we had the woosh of a white-winged tram. Not the pastel classicism of Athens, but ballerinas, marauding bike gangs, dirigible marsupials and an Arts Centre spire constructed from macrame.

And what did it all mean? Who knows. If great theatre is an assembly of action that indicates an undefinable, inexplicable other, then this may well have been great theatre. If modern drama stretches our timid imaginings beyond explicable narrative into the realm of vague, multiply interpretable gesture, then this was indeed modern drama.

Last night’s ceremony, therefore, was bold, bright, and deeply strange. What narrative there might have been was only revealed through a close reading of the complex, detailed storyboard that accompanied the production.

An observer innocent of this text might as well have been watching an unsubtitled Latvian staging of Lear. In the round. Played by fish, with constant fireworks.

None of which is to say that last night’s show – cheap seats $490 – didn’t fulfil the exacting requirements of a great opening ceremony. The compulsory elements, held in common among all performances of this type, were well executed.

There was, of course, a national anthem, a tune presented at the MCG in sign language, presumably in case of public address failure.

There was the arrival of the baton/torch, a normally simple process involving joggers and a flaming stick, here enlivened by the presence of water, lurid fish and high technology; not to mention footballers fumbling with bobbing pontoons and the imminent prospect of an uncomfortable dousing in whatever it is that runs between the banks of the Yarra.

There was an oath, a flag raising, welcome speeches and the mandatory nod to indigenous residents whose ancient capitulation made all of this possible.

And then there’s the parade of athletes, a spectacle that is the overlong bane of every Games opener, enlivened here by the stand-out work of Melbourne’s Cat Empire, a valiant band whose jauntily harmonious efforts deflected what would otherwise have been a segment of monumental tedium; notwithstanding the heart-stopping tension that preceded the arrival of Tuvalu, Guernsey and St Kitts.

Cat Empire actually appeared to be playing their instruments live.

And the play? The story that wove in and around the ponderous but necessary ceremonial? It was, as has become the norm, a tribute to the nobility of individual aspiration and hope. A testament to the transporting power of dreams and the often unsung role of marsupial emergency services in rescuing errant skateboarders from tall civic structures.

It was big, it was loud, it was colourful and occasionally airborne. In the end it all went up in smoke. In other words: a triumph of its type.