At an event like Monday's Emmys, where brilliant shows Schitt's Creek, Watchmen and Succession rightly swept the majority of the awards, it's the harsh reality that some equally acclaimed shows – such as Normal People and Mrs. America – would have to be left out in the cold. 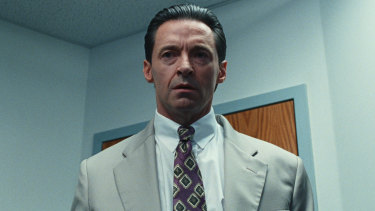 Hugh Jackman gave one of the best performances in his career playing Frank Tassone in Bad Education.Credit:HBO

Similarly, actors such as Hugh Jackman, Jennifer Aniston and Sarah Snook missed out when Mark Ruffalo, Zendaya and Julia Garner deservingly won their categories respectively. But as the TV experts on this week's episode of The Televisionaries discuss, the losses just serve to highlight what has been an epic year in television.

"Hugh Jackman’s performance in Bad Education is a career-best for him. The ambiguity, the edges he gives the Frank Tassone character really shows you what he's capable of," says The Guide and Green Guide critic Debi Enker.
"He was probably the strong competition against [winner] Mark Ruffalo … but Ruffalo gave every inch of himself to his performance in I Know This Much Is True, so it was really good to see that recognised."

For host Louise Rugendyke, one of the biggest surprises of the Emmys was that the critically acclaimed show Normal People, which became something of a cultural touchstone when it was released in April, saw no love on the award front.

That lead actress Daisy Edgar-Jones didn't even receive a nomination while her counterpart Paul Mescal did reminds how tough this year's competition was.

"It's a good signifier for the amount of female talent that's out there at the moment," says Rugendyke. "The people who were nominated in the outstanding lead actress in a limited series category, which is where Edgar-Jones would have ended up … all [gave] strong performances. You really would have had to have done something very exceptional to elbow your way in."

Elsewhere in the podcast, Rugendyke, Enker and Spectrum deputy editor Kylie Northover discuss other surprising snubs, Jimmy Kimmel's efforts as host – did he pull off the first-ever virtual Emmys? – and why shows like Schitt's Creek and Succession reflect the mood of the times we're living in. They also hand out a few awards of their own!

Listen to the new episode now and don't forget to subscribe to The Televisionaries wherever you listen to your favourite podcasts.

The importance of adoption cannot be overstated – it can change the very course of a child’s life, as well as making parents out of willing adults. This is why Metro.co.uk have shone a spotlight on all things to do with adoption for our inaugural Adoption Month. Charity Family Lives states that, in the UK, there are around 6,000 children […]

END_OF_DOCUMENT_TOKEN_TO_BE_REPLACED

STEPHEN GLOVER: Who will rid us of these anti-Brexit, grenade throwing bishops? Church of England bishops have over the years derived much pleasure from flinging brickbats at the government of the day. That almost always means a Tory government. Thirty-five years ago, some prelates famously criticised Margaret Thatcher over her economic policies, which they thought were impoverishing the inner cities. […]

END_OF_DOCUMENT_TOKEN_TO_BE_REPLACED
This website uses cookies to improve your user experience and to provide you with advertisements that are relevant to your interests. By continuing to browse the site you are agreeing to our use of cookies.Ok