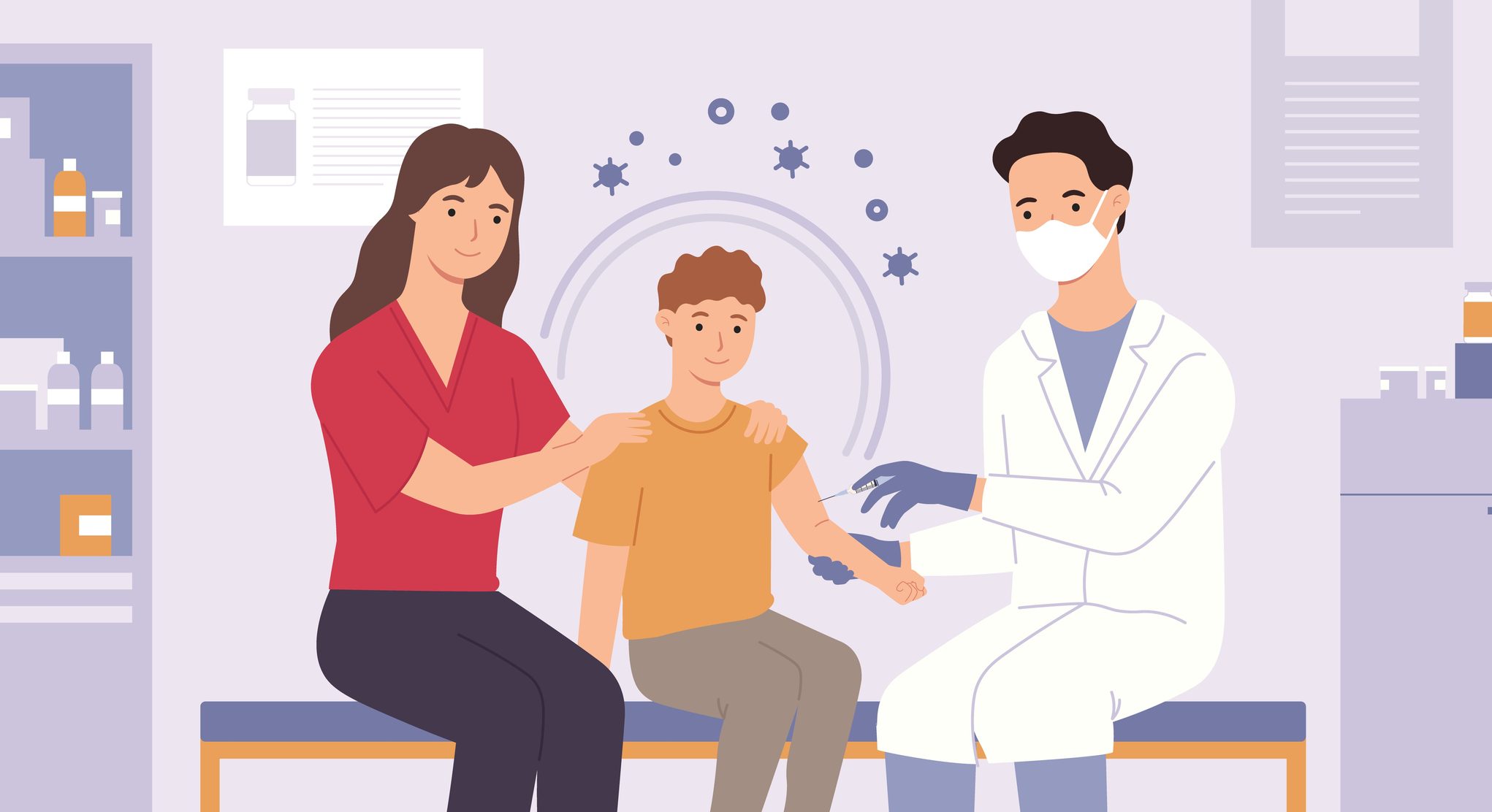 Last week, the Pfizer vaccine was approved for children ages 12 to 15 year olds in the UK, following successful trials.

It was previously approved for use in children aged 16 and 17 but the current rollout plan mostly covers those over 18.

But as the programme opens up for the 25-29 age group, it could soon be made available to children once all adults are covered.

With that in mind, it might be a good idea to start talking to your teenagers about getting the vaccination.

With the internet swarming with misinformation, they may have concerns about getting the jab, but parents can work through their feelings with them and help them make an informed decision.

While you as a parent might hold strong views, have an honest conversation about your child’s thoughts and concerns.

Chartered and Registered Psychologist Dr Elina Telford explains: ‘It is important to be open and honest with children and young people, in a way that is appropriate for their age.  It is equally important to listen to their views rather than lecture them.

‘Ask children and young people about their hopes and fears associated with the vaccine, as well as being curious about their beliefs and where these beliefs have come from i.e. playground chat, the news, or social influencers.

‘This will help parents and carers to better understand and respond to their children’s concerns, should they have them.’

Psychologist and parenting expert Dr Maryhan Baker adds: ‘It shouldn’t become a case of parents imparting information to children and telling them what they need to do.

‘Talk about what is a vaccine, what is a virus, and why we have these to protect us.

‘But I think you should also ask your child what they know and what they have heard about the vaccine. Children, particularly teenagers, probably know because of access to social media and we need to be upfront about misconceptions by addressing what the facts are.’

Helen Spiers, head of counselling at Mable Therapy says that while it can be tempting to dismiss their fears, it’s important to hear them out and back up what you are saying with as much information as possible.

‘It can be really tempting as parents to say: “Oh, don’t be silly! That won’t happen. That’s nothing to worry about”,’ Helen says.

‘But what that will do is that will just stop them opening up about things in the future, because they’ll think they have stupid ideas that shouldn’t be shared.

‘We want to hear them, let them know that we really understand it and that lots of people are probably feeling the same way they’re feeling.

‘Facts are our friends. Arm yourself with as many facts as you can, to let them know, you know how safe it is. Do we want to believe people or believe the scientists are experts and have been trained in it for decades?’

Nerves around the process

Some young people might accept the need to get the Covid-19 vaccine but be more concerned with the process of actually getting the jab.

Helen explains that there are things you can do to help them feel calmer.

‘If they are nervous about actually getting an injection, give them some techniques. You can go online and find some simple breathing techniques and simple visualization techniques.

‘When it comes to the appointment, see if a parent can go with them and hold their hand, depending on the age of them.

‘Point out that it will just be a second in time, but the benefits of it will be so far reaching on a personal level, but also on a on a global level in terms of what you’re doing for the people around you.’

The attitudes of friends

Continue having discussions about what is right for them, while remaining respectful of the decisions of others.

Elina adds: ‘It is important that conversations are held without judgement, i.e. showing an openness to different families having different situations and/or beliefs meaning that they might not be able or wanting to have the vaccine.

‘It can be important to help your child to understand that having the vaccine does not make you a bad or a good person and that maybe their friend might need some emotional support if they are not able to have the vaccine.

‘If appropriate, discuss how we all have different beliefs and associated behaviours and how there can be unseen reasons as to why someone might not have a vaccine. You might provide an example of a relative who has chosen/have not been able to have the vaccine and how you do not love them any less for their decision/reason.’

Maryhan adds that they may also be concerned about talking about vaccines after they’ve had it and parents should explain it’s ok to keep it to yourself if that makes you more comfortable.

She says: ‘If they are worried about how their friends might react, have a discussion about what they may choose to say or not say about whether they’ve had the vaccine or not. It’s about saying that it’s okay to choose to have the vaccine but choose not to tell friends.

‘If they want to use their voice to say “I’ve had the vaccine”, and I think it’s really important that others do, because they feel passionately about it, then that’s okay, but it’s equally okay if our children have the vaccine, know that their cohort of friends are really quite anti it or that there’s a lot of animosity around it, and that they also make the choice not to verbalize that they’ve had it.

‘I think in an ideal world, we as a society would be much more compassionate, but unfortunately, the reality is that people have some really very strong views about vaccines.’