Home » Lifestyle » How we won the Sydney Games: the inside story of diplomacy and panache

How we won the Sydney Games: the inside story of diplomacy and panache

Paul Keating had dropped by to try and work his charm on the VIP guests.

It was March 1993 and 11 members of the International Olympic Committee's evaluation commission were in Sydney to assess whether the city's bid was all that had been promised.

As they dined at what was then Regent at The Rocks (now The Four Seasons Hotel), the prime minister remarked at the view of the world-famous harbour, with his immortal phrase: "If you're not living in Sydney, you're camping out."

His senior adviser, Simon Balderstone, had warned him moments before that it was not convention to criticise rival bids. But Keating couldn't help a gentle dig.

"Well, Beijing is no fun city, but of course their crowd control is better than ours," he remarked, a subtle reference to the tragic events at Tiananmen Square almost four years earlier.

Keating, who had little time for sport, had by now fully embraced Sydney's bid as a vital step in Australia's search for a new, international identity.

The seeds for what would be known as "the best games ever" were sown well before the heroes of 2000 – Cathy Freeman and Ian Thorpe – were born. But it took visionaries from business, sport and politics to pull it off.

The schoolgirl from Bangor primary stole the show as she told nearly 90 international delegates that Sydney was a "friendly city where it doesn't matter where you come from". 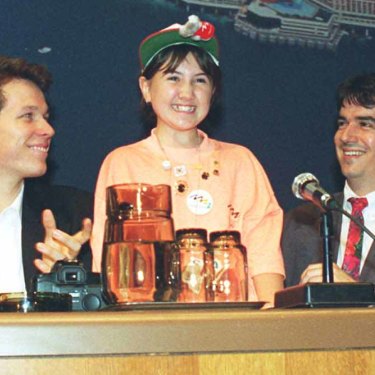 Eight years later premier Neville Wran set up an interdepartmental committee to look at the feasibility of staging the games.

It found that an Olympics based at Homebush would be a net positive economically, but Wran was talked out of bidding by Norman Oakes – then head of the NSW Treasury – who was spooked by the economic flop of the Montreal games, which saddled the city with $1.5 billion in debt.

But the dream did not die and a Sydney bid remained front and centre for both sides of politics in NSW for the next decade. The city would miss out to Brisbane and Melbourne in 1992 and 1996 but it became a political obsession to be lucky on the third attempt.

McGeoch says the 1970s vision played a critical role in making sure the city was ready when it's time came.

"This was significant because one of the strengths of Sydney's ultimate bid was that it had its plan in place very quickly, having started it way back in the 1970s," he said. 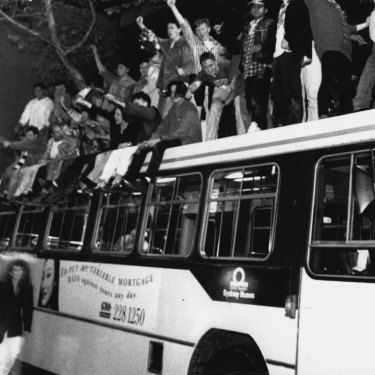 Sydneysiders celebrate on top of a bus in George Street after the announcement in Monte Carlo. September 24, 1993. Credit:Steve Christo

In October 1990, premier Nick Greiner had formed another special committee, headed by the minister for transport Bruce Baird, and asked it to take another "pragmatic and hard-headed look" at the feasibility of a bid.

Baird, who later became the minister responsible for Sydney's Olympic Bid, remembers Greiner taking him aside in the cabinet room.

"I've got a job for you," he recalls the premier saying. "I want you to go to Monte Carlo".

Baird was on a flight to Monaco within weeks to meet and greet some of the IOC delegates and establish whether they would be receptive to a Sydney bid. He returned home with good news: "They were very warm of the idea".

Greiner wrote to the Australian Olympic Committee saying his government was prepared to underwrite a bid pending the outcome of a feasibility study. But he would need the blessing of the organisation first.

John Coates, a Sydneysider and former Olympic rowing official, told Greiner he would need to put his money where his mouth was and commit to building an aquatic centre and athletics stadium at Homebush. His demands were met. 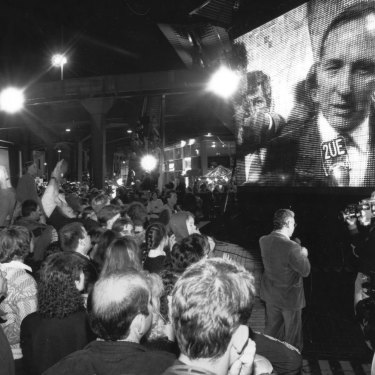 Prime Minister Paul Keating is on the big screen as Sydneysiders celebrate at Circular Quay.Credit:Andrew Taylor

Baird was then sent out as the salesman to convince the federal government and opposition, Indigenous leaders the nation's media of the merits of the bid.

"We had seen with Toronto's bid that the media had just about cruelled it, so I had to line up meetings with executives across the country," Baird recalls. "I sat with Kerry Packer and thought to myself, 'this isn't going well' but by the end, he was behind it."

As treasurer, Keating wasn't as keen on the economics of the bid as the then prime minister Bob Hawke. But by May 1992, with Keating in the top job, he was prepared to stump up.

McGeoch recalls Keating sitting next to Greiner, eating croissants, at a fundraising breakfast in Sydney. The prime minister surprised the 400-strong crowd by committing $5 million of Commonwealth money to the process.

"It just took my breath away," McGeogh says. "That sort of money was a huge amount. It was really the first moment when I realised the bid had united the country, and everyone from all political persuasions."

Balderstone, having urged Keating to make the financial commitment, recalls spontaneous applause and bear hugs from state Liberal MPs. Keating, having met his end of the bargain, asked his staffer for a favour in return.

"He told me I would have to call the finance minister [Peter Walsh] and tell him what he'd committed too. I knew what the reaction would be… he was furious," Balderstone recalls.

Over the next 18 months, a who's who of business, unions, sport and politics crisscrossed the world or played host to visiting IOC delegates.

If people like McGeoch and Baird were naive at the might of the task they had, Coates provided the cunning, strategic know-how to woo the world.

"He was simply brilliant," Baird says. "Some people see him as a Machiavellian figure, but he was thoroughly strategic in what we needed to achieve. He was brilliant."

McGeoch also had the best and the brightest public servants at his disposal and credits perhaps the most influential decision of the bid – offering to pick up the tab for the world's athletes and officials to fly to Australia if Sydney won – as a critical moment.

The ground-breaking offer would be a game-changer for many smaller nations, who would struggle to afford to send their athletes to the other side of the world.

"Paul came to me and said, how much do you think it would cost? So we asked Qantas to make an estimate on the Barcelona figures and we came up with about $30 million – maybe it was $40 million in the end."

McGeoch announced the plan to IOC delegates in Acapulco and Baird cites that moment was a game-changer. 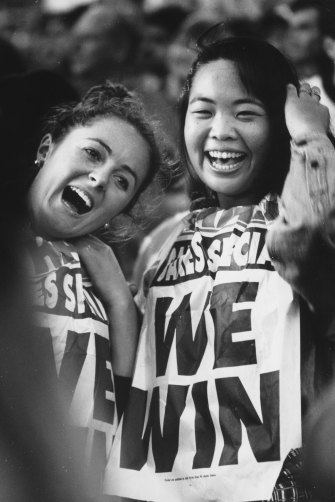 "That made them all take notice," Baird says. "It was a pretty bold move, but I think it was a turning point in people taking us seriously."

Back home, the bid employed the services of Indigenous activist Charles Perkins to help win the support of Aboriginal and Torres Strait Islander communities, while former prime minister Gough Whitlam and his wife Margaret were dispatched to win over delegates from African nations.

It would later be revealed that Coates had sealed two votes – the eventual winning margin – by offering $US35,000 each to the sporting programs of Uganda and Kenya.

Baird too was caught up in controversy, amid claims he helped Nick Voinov, son-in-law of a Romanian IOC member, get a job with the state's railways. The scandal was referred to the Independent Commission Against Corruption but he was never interviewed and the commission had decided not to instigate a formal inquiry.

"It was a bit like A Tale of Two Cities," Baird recalls. "The best of times and the worst of times. Things like that took their toll but I don't think we realised just how intense the bidding process had become."

Balderstone says the nation has rarely seen such collaboration, where competing interests were prepared to work together.

"I'm not sure that we've seen anything like what happened during that bid, in terms of the bipartisan co-operation," he said. "It was a monumental achievement."

As the years pass, recollections of key moments differ slightly between individuals. Some talk up their own roles, others play them down.

"Success has many fathers, as they say," Baird laughs. "I'm just glad I didn't end up as the man who lost it."

But all who were there agree on one thing: that

night in Monte Carlo in 1993 was the greatest of their lives.

END_OF_DOCUMENT_TOKEN_TO_BE_REPLACED

END_OF_DOCUMENT_TOKEN_TO_BE_REPLACED
This website uses cookies to improve your user experience and to provide you with advertisements that are relevant to your interests. By continuing to browse the site you are agreeing to our use of cookies.Ok