Human model made from stem cells provides blueprint of the body

An embryo-like model researchers created from stem cells can provide a ‘blueprint’ of the human body as it forms, a study has reported.

The development by researchers from the University of Cambridge will allow experts to study the so-called ‘black box’ period of human development, gastrulation.

Scientists are unable to directly observe this time in human development in the laboratory as a result of ethical and legal constraints on embryonic research.

The model may help reveal the causes of birth defects or diseases that begin during gastrulation and are often linked to alcohol, medications, chemicals and infections.

A better understanding of the gastrulation period in humans could also help shed light on other conditions including infertility, genetic disorders and miscarriage. 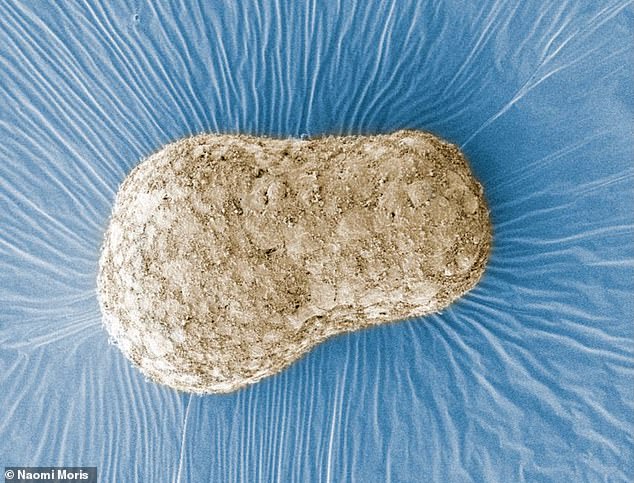 A human embryo-like model researchers created from stem cells, pictured, can provide researchers with a ‘blueprint’ of the human body as it forms, a study has reported 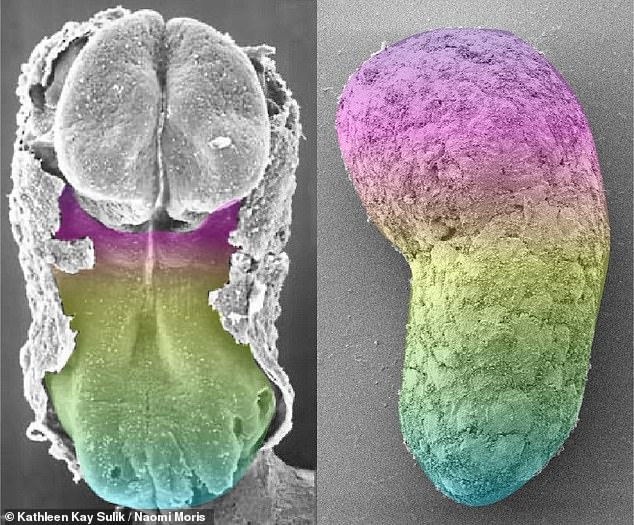 The development by researchers from the University of Cambridge will allow experts to study the so-called ‘black box’ period of human development, gastrulation. Pictured, a false colour comparison of a 20 day old human embryo, left, with the team’s gastruloid model, right. The colouration represents the estimated similarity of gene expression profiles. The real human embryo is also surrounded by brain/neural folds and extra-embryonic tissues, uncoloured

‘Our model produces part of the blueprint of a human,’ said paper author and geneticist Alfonso Martinez-Arias of the University of Cambridge.

‘It’s exciting to witness the developmental processes that until now have been hidden from view — and from study.’

This ‘black box’ period, known as gastrulation, had previously been impossible to study in humans as legal restrictions prevent the culture of embryos in the lab beyond 14 days — the point at which the process begins.

This legal limit was selected as the threshold beyond which an embryo can no longer form a twin, but has stopped experts from observing the ‘blueprint’ of the human body as it is being drawn up.

During the gastrulation period, three layers of cells are formed — the ectoderm, the mesoderm and the endoderm — which go on, broadly speaking, to form the body’s nervous system, muscles and gut.

In their study, Professor Martinez-Arias and colleagues placed embryonic stem cells into ‘small wells’ to create so-called ‘gastruloids’, which resemble human embryos during the early stages of development, at around 18-21 days after conception.

Treating the models with chemical signals, the researchers observed the gastruloids lengthening along their head-to-tail axis, turning on genes in specific patterns that exhibited a ‘clear signature’ of the process that forms different human body parts.

In a real embryo, this process would eventually give rise to such bodily structures as as thoracic muscles, bone and cartilage.

‘This is a hugely exciting new model system, which will allow us to reveal and probe the processes of early human embryonic development in the lab for the first time,’ said paper author and geneticist Naomi Moris, also of the University of Cambridge.

‘Our system is a first step towards modelling the emergence of the human body plan — and could prove useful for studying what happens when things go wrong, such as in birth defects.’

In their study, Professor Martinez-Arias and colleagues placed embryonic stem cells into ‘small wells’ to create so-called ‘gastruloids’, which resemble human embryos during the early stages of development, at around 18-21 days after conception Pictured, a growing human gastruloid, seen here at 24 (left), 48 (middle) and 72 hours (right) after embryonic stem cell aggregation 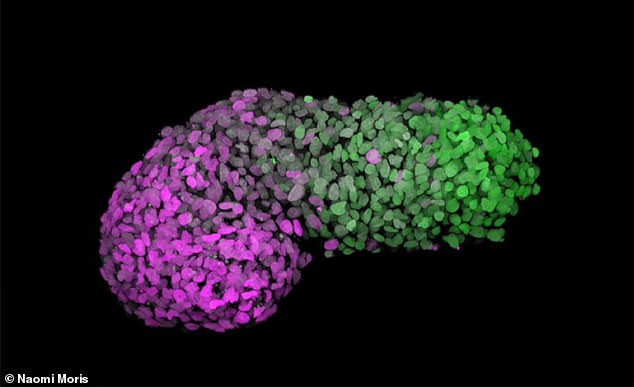 Treating the models with chemical signals, the researchers observed the gastruloids lengthening along their head-to-tail axis, turning on genes in specific patterns that exhibited a ‘clear signature’ of the process that forms different human body parts. Pictured, a gastruloid differentiates — with the green section resembling the tail end of a real embryo and the magenta section becoming similar to developing heart cells

The model, the researchers hope, could help explain the causes of human birth defects and develop tests for these in pregnant women.

Around one in every 45 babies born in England and Wales suffers a birth defect, the most common of which are heart defects, Down Syndrome and spina bifida.

Until now, scientists have relied on model organisms like mice and zebrafish in order to study the gastrulation process — however, it has been uncertain exactly how similar these model are to human embryos when the cells start to differentiate.

Furthermore, animal models are known to respond differently to certain drugs — the anti-morning-sickness drug thalidomide, for example, passed clinical trials after being tested on mice, but leads to severe birth defects in humans.

For this reason, the researchers explain, it is important to develop better models of human development. 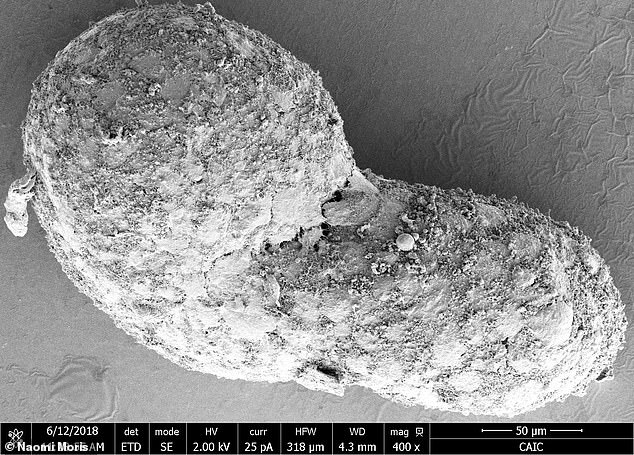 The model, the researchers hope, could help explain the causes of human birth defects and develop tests for these in pregnant women. Pictured, a scanning electron microscope image of a human gastruloid

According to University College London reproductive science expert Joyce Harper — who was not involved in the present study — gastrulation has been referred to ‘as the most important stage of our life.’

‘But up until now we have never been able to study it in humans,’ she added.

‘This exciting work will allow many key studies to be done so we can learn about early human development and when it goes wrong.’

‘This will help us learn more about genetic diseases and infertility.’

Research using gastruloids will not be possible in all countries, however. In many countries — including the UK and Japan — work with embryo-like models is permitted because they do not have the potential to grow into individuals.

This is because gastruloids do not have brain cells, nor do they possess and of the tissues that would be needed in order to successfully implant them within a womb.

In the US, however, federal law prohibits the creation or destruction of such models in the same way that it restricts studies involving real human embryos.

The full findings of the study were published in the journal Nature.

WHAT ARE STEM CELLS?

Stem cells are a basic type of cell that can change into another type of more specialised cell through a process known as differentiation.

Think of stem cells as a fresh ball of clay that can be shaped and morphed into any cell in the body – including bone, muscle, skin and more.

This ability means they have been the focus of lots of medical research in recent decades.

They grow in embryos as embryonic stem cells, helping the rapidly growing infant form the millions of different cell types it needs to build before birth.

In adults they are used as repair cells, replacing those we lose through damage or ageing.