A wife’s attempt to publicly humiliate her clueless husband’s first go at making the bed in 45 years backfired when his creative ways of presenting the extra cushions proved an unlikely viral hit.

Joanne Sterling who lives in Manson, Washington, firmly told her husband Jim that he had to ‘pull his weight’ around the house for the first time, after he retired from his role as the boss of a hardwood flooring store.

She gave him the job of making the bed and was left in hysterics after seeing how the extra pillows baffled the 66-year-old, who thought they were supposed to be piled up against the wall.

Retired pharmacy technician Joanne, shared a photo of the bizarre set-up on her Facebook to mock how clueless Jim was and did the same the following few days with his next attempts. 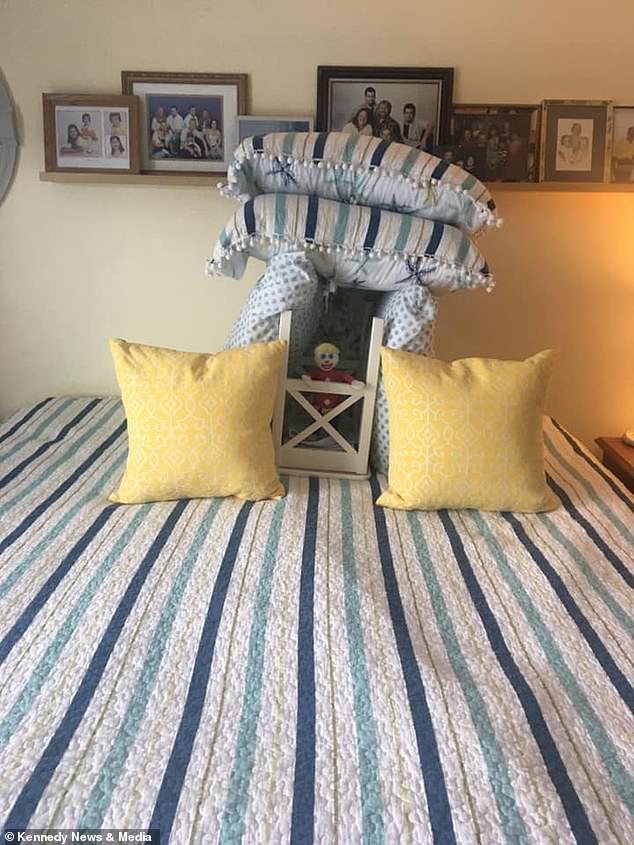 Joanne Sterling who lives in Manson, Washington, has been documenting her husband Jim’s hilarious attempts at making the bed for the first time in 45 years on social media. Pictured: Jim using pillows as a makeshift prison for a teddy 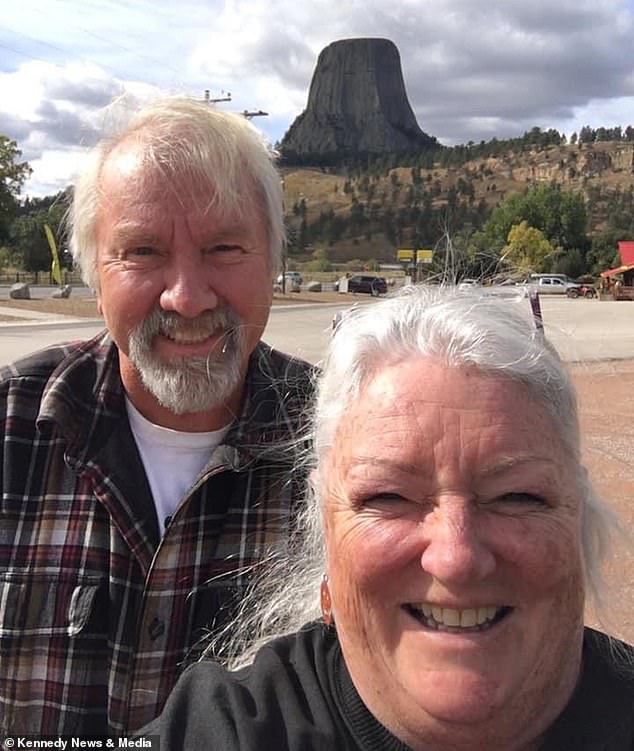 Joanne asked Jim to ‘pull his weight’ around the house, after he retired from his role as the boss of a hardwood flooring store. Pictured: Jim and Joanne Sterling 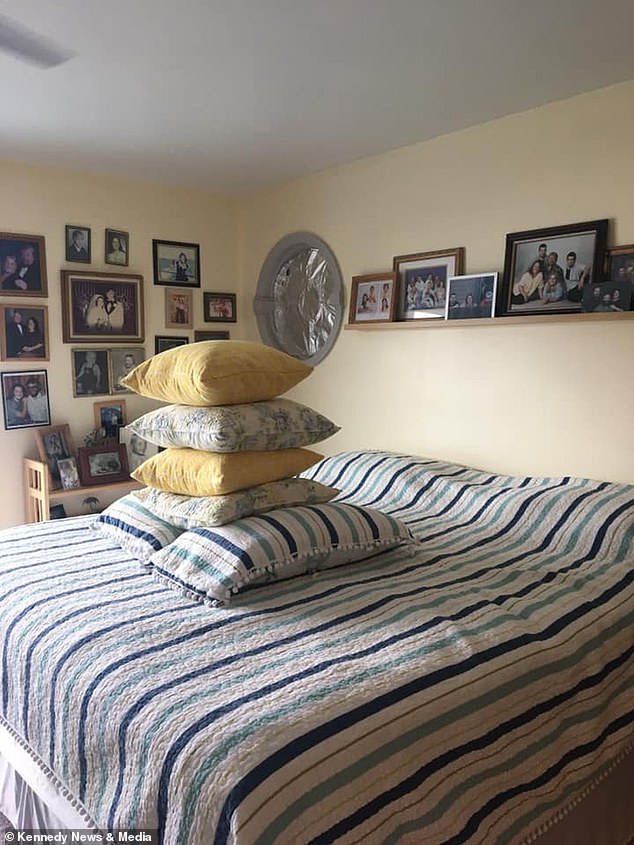 Jim and Joanne’s daughter Jessy, racked up almost 20,000 likes after her post about his bed making skills went viral on Facebook. Pictured: Jim piled all of the cushions on top of each other

However their plans of embarrassing Jim failed to work as once he saw that his imaginative ways of arranging the cushions had struck a chord, he set about creating more elaborate displays to poke fun of himself.

Joanne said: ‘I just don’t think he had any idea what to do with the extra pillows, so put them anywhere.

‘Once he’d retired, I told him he had to start pulling his own weight and start helping out around the house. 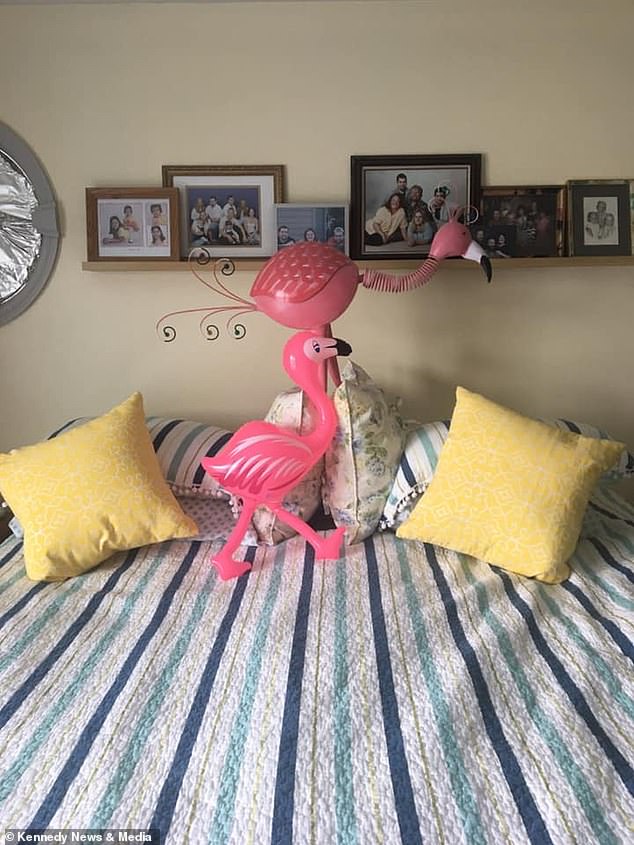 Jim had four cushions left over from his first attempt at making the bed. Pictured: One of Jessy’s post on Facebook

‘When he did the first one, he didn’t say anything about it. He just let me find it on my own.’

Once he had sorted the duvet and normal pillows, Jim was still left with four more cushions and appeared to be stumped by what to do with them.

On the first day, he piled them all on top of each other, creating two identical totem-like piles with the yellow cushions on top.

The following day Jim laid the two yellow cushions and two floral questions in a line in front of the head pillows, creating almost a second level.

On the third day, he hid all of the ornamental cushions underneath their functional pillows before piling all eight of the furnishings into the middle of their bed. 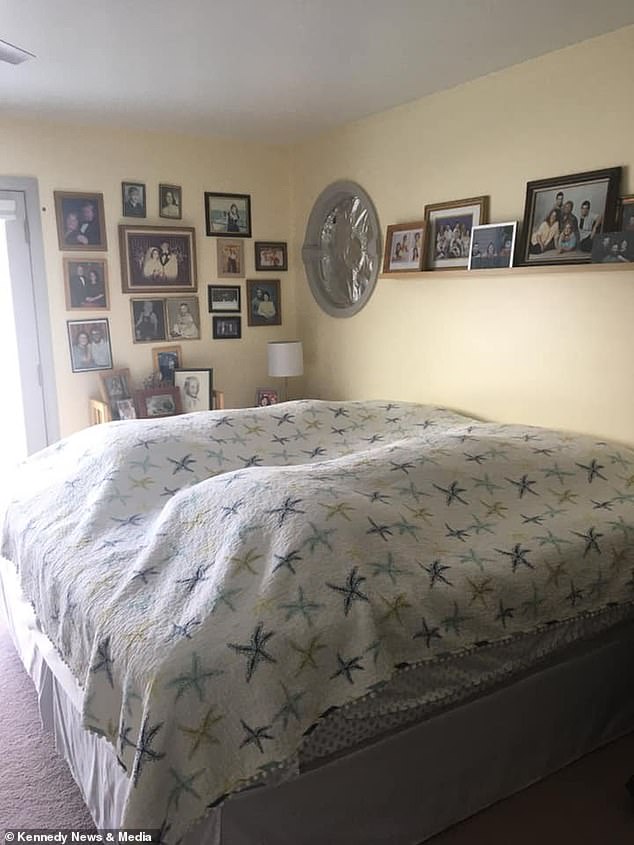 Jim has been playing up to his new-found fame by experimenting each day with elaborate methods of presenting the pillows. Pictured: Jim hiding the pillows under their duvet 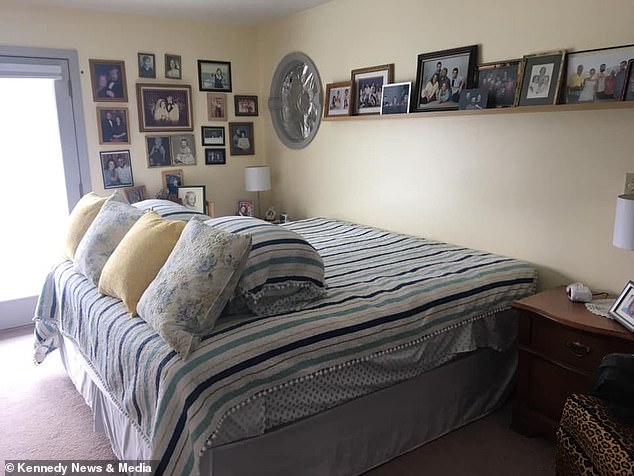 Joanne said Jim’s designs are funny but she’s happy that he’s making the bed every morning. Pictured: Jim placed all the cushions at the bottom of the bed

Joanne shared each of the unusual attempts to arrange them on her Facebook page each day, until her daughter spotted the hilarious situation and made the viral post of her dad’s failed attempts.

Since becoming a viral hit, Jim has played up to his new-found fame by coming up with increasingly elaborate methods of presenting the pillows.

Joanne said: ‘His designs are funny, but honestly, I’m just so happy he is making the bed every morning.

‘He still doesn’t tell me about what he’s done, he just leaves it as a surprise for me when I walk into the bedroom. 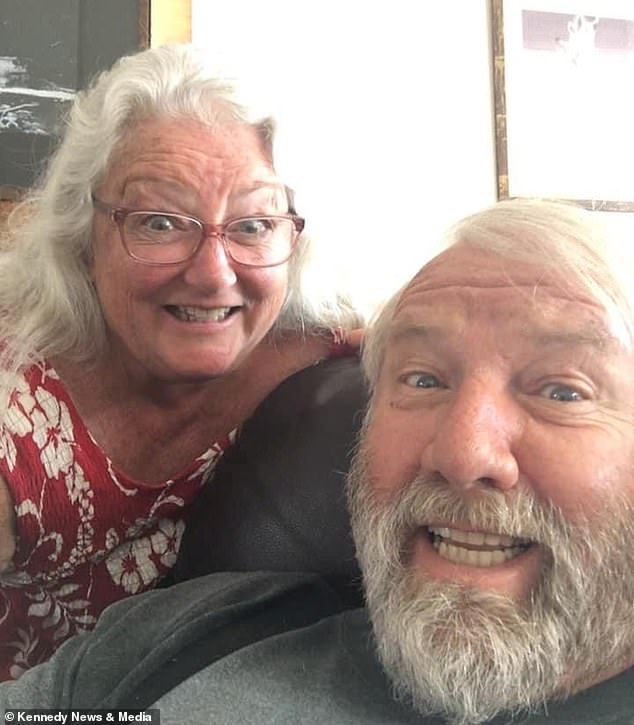 Joanne revealed she’s surprised each time Jim makes the bed, because he doesn’t tell her what he’s done. Pictured: Joanna and Jim Sterling 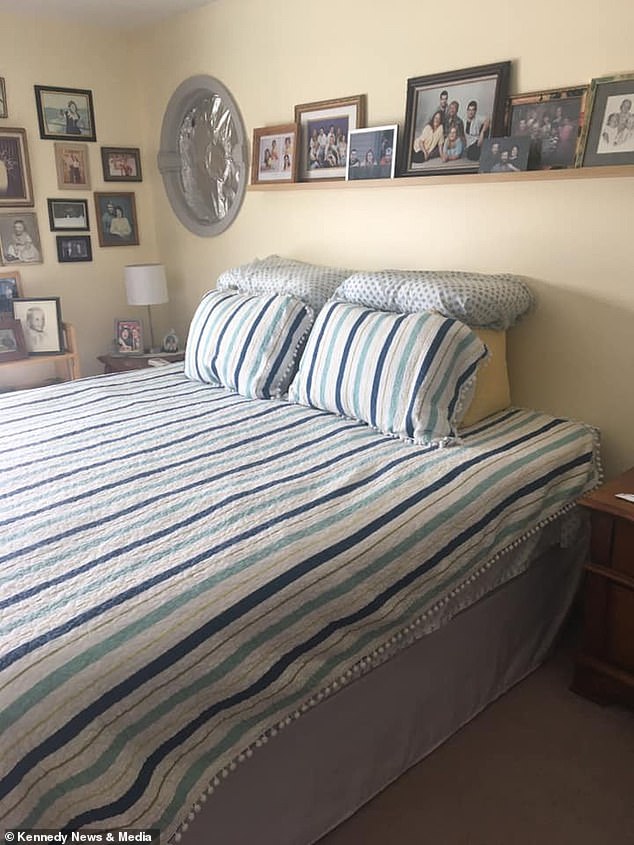 Joanne revealed her favourite of Jim’s attempts was the first one, saying his creativity keeps them both in a good mood. Pictured: Jim hid all the cushions underneath the pillows 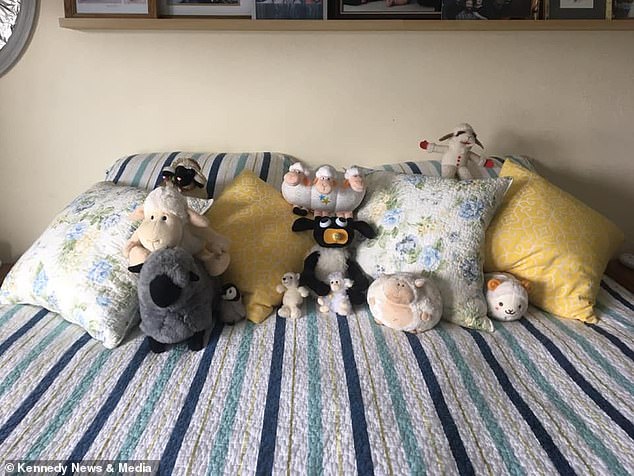 ‘The bed stays this way until we go to bed, and I giggle every time I pass by it.

‘My favourite was the very first one because it made me laugh so hard. It keeps us both in a good mood.

‘I couldn’t believe the interest his little creations have had. I guess other couples can just relate to a husband not knowing what he’s doing around the house.

‘Now he thinks he’s famous, I think it’s starting to egg him on. He has even started incorporating props like teddies and even an inflatable flamingo.’ 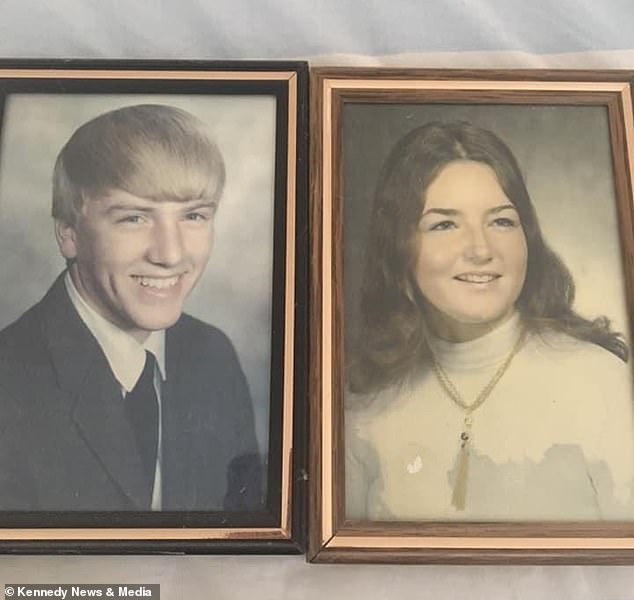 Joanne believes other people can relate to having a husband who doesn’t know what they’re doing around the house. Pictured: Jim and Joanne as high school sweethearts 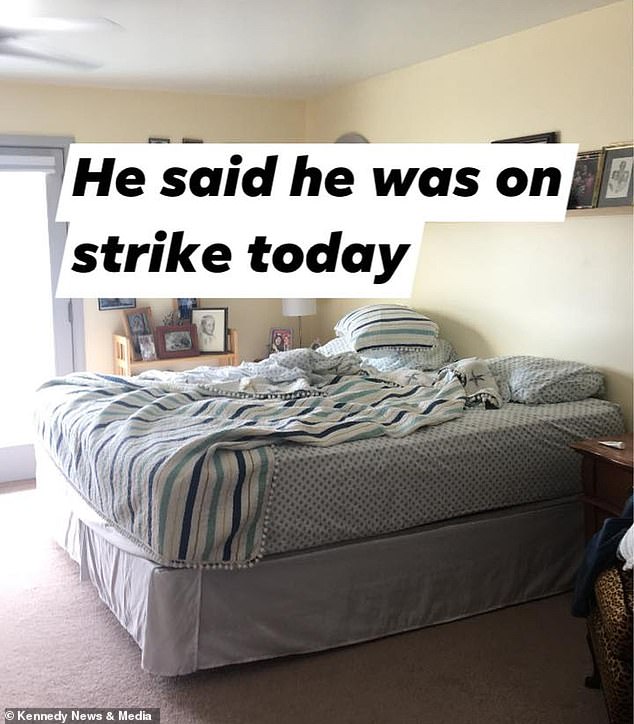 Joanne admits she’s been egging Jim on because he thinks he’s now famous. Picture: A day when Jim refused to make the bed