"I Don't Want To Die Here!" Older ICE Detainees Fear The Worst As The Coronavirus Spreads 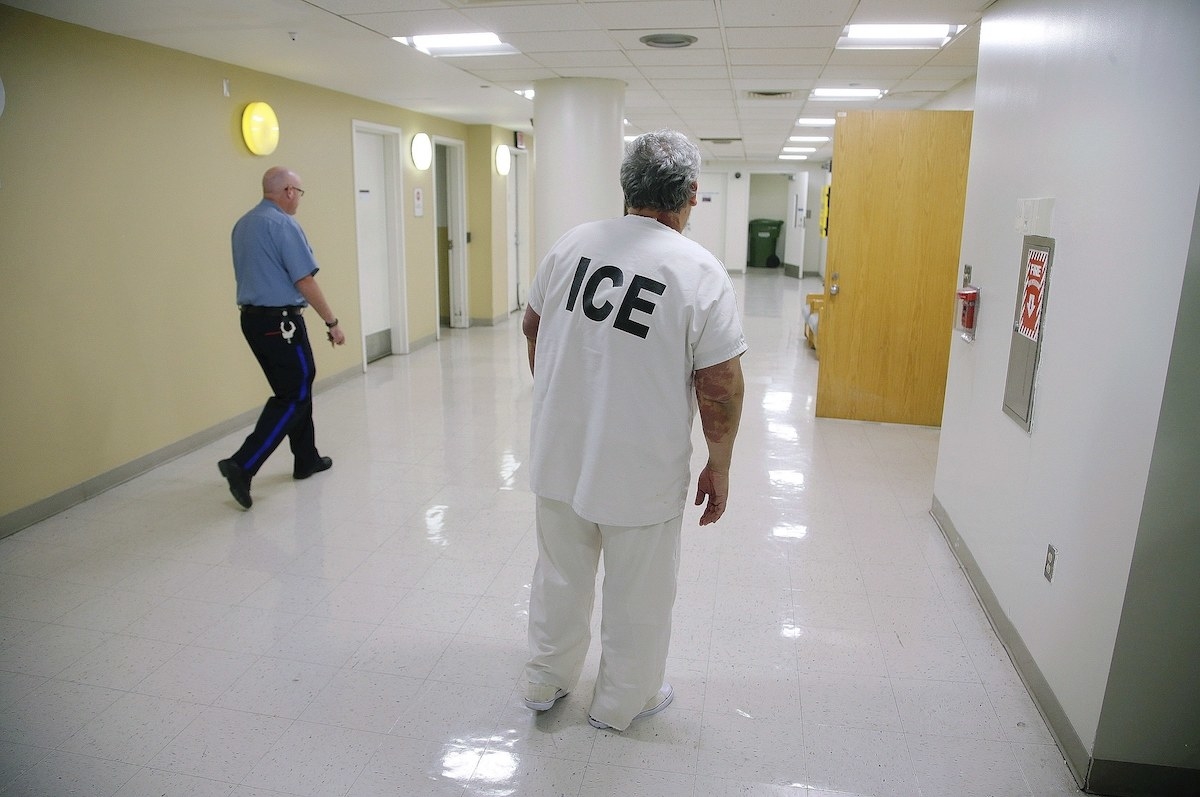 An immigrant facing deportation to El Salvador returns to his cell at an ICE facility in Boston.

Mariela, one of hundreds of older immigrant detainees in government custody at local and private detention centers across the country, worries she will die in a jail.

The 60-year-old Colombian has been in Immigration and Customs Enforcement custody for two months in El Paso, Texas, where she folds laundry and helps clean the facility, a job for which she says she is paid $1 a day.

Mariela is accused of violating her visa by working in the US — a charge she denies — and knows that she’s at a higher risk of death if she contracts COVID-19, the disease caused by the coronavirus, than other detainees who are younger.

“I am very afraid of getting the virus — that’s my life,” she said. “This shouldn’t exist at all — detaining people who are more than 60 years old. I came to the US with a visa. This is an injustice. I cry every night, every day. I feel helpless. I don’t know what’s going on.”

Medical experts and immigrant advocates have warned that the highly contagious disease puts every detainee in detention at risk. But for the older detainees in ICE custody, the inherent problems within jails — like a lack of necessary space to accommodate proper social distancing guidelines — put them in even more danger, experts say. Advocates have used these arguments as a way to push for more releases.

“These people are at increased risk of serious complications and death from [COVID-19],” said Marc Stern, a public health expert and faculty member at the University of Washington. Data from the Centers for Disease Control and Prevention show increased risk to those who are 50 and older, he noted.

“So they should be among those people ICE prioritizes for consideration to release. The other – and from the public’s standpoint, more important – reason for the public to be concerned about this is that it is more likely that these people will become infected if they are in a detention center than at home. And when they get sick, they’re going to be transported to a local community hospital where they may very well occupy a scarce hospital or ICU bed and ventilator,” Stern said.

Last month, ICE officials began assessing their inmate population to locate “vulnerable” detainees, like those who are over 60 or pregnant. So far, they have released nearly 700 detainees, and detention numbers are the lowest they have been in several years. As of Friday, there were more than 300 detainees over the age of 60 in ICE facilities, 93% of whom have either a record of criminal conviction or pending criminal charges, according to an agency official.

ICE spokespeople have said determinations on who to release are based on the “person’s criminal record, immigration history, ties to the community, risk of flight, and whether he or she poses a potential threat to public safety.”

“Due to the unprecedented nature of COVID-19, U.S. Immigration and Customs Enforcement is reviewing cases of individuals in detention who may be at higher risk for severe illness as a result of COVID-19. Utilizing CDC guidance along with the advice of medical professionals, ICE may place individuals in a number of alternatives to detention options,” the agency wrote in a statement. “Decisions to release individuals in ICE custody occur every day on a case-by-case basis.”

Advocates, however, point to the older detainees still in custody as proof that ICE is not doing enough. Lawsuits filed by the Mexican American Legal Defense and Educational Fund and the Center for Constitutional Rights in recent weeks have asked a federal judge to force ICE to release a pair of 78-year old detainees, along with a 62-year-old asylum-seeker.

“It is very irresponsible to be detaining him in this situation — he is elderly, he has medical conditions that make him extremely vulnerable to COVID-19,” said Carlos Moctezuma Garcia, an attorney representing Raul Garza Marroquin, one of the 78-year-olds in custody.

Garza, who suffers from hypertension, mixed hyperlipidemia, polyosteoarthritis, and pre-diabetes, has been in ICE custody at the Port Isabel Detention Center in Los Fresnos, Texas, for the last several weeks, according to the lawsuit. He alleges that he has been unable to get regular access to soap and hand sanitizer, a charge that others in detention centers across the US have also made.

Garcia attempted to get Garza out of custody in late March, but the request was denied by an ICE official. Garza, who is a permanent resident, has been arrested on multiple driving while intoxicated charges and, in 2016, an assault allegation.

Similarly, lawyers from the Center for Constitutional Rights sued the government last month for the release of Matilde Flores de Saavedra. The 78-year-old detainee, who like Garza is a permanent resident, was picked up by ICE officials in June after serving a sentence for conspiracy to transport undocumented immigrants, according to court documents.

In a declaration to the court, Saavedra said she has diabetes and high blood pressure.

“Tensions are running high as everyone in the dorm is worried that the detention center is doing nothing to prevent them from contracting the disease,” she wrote about the conditions at the LaSalle ICE Processing Center in Louisiana. “Neither the staff nor the detainees use gloves or masks around the dorm and neither the staff or ICE have said anything to any of us about coronavirus. All we know is what we see on television.”

Stern, the expert from Washington, said that ICE officials should change their assessment of the vulnerable population in agency custody by including those over the age of 50. Correctional health experts have found that those in detention are physiologically comparable to those in the community who are older.

“Many state departments of corrections and the Federal Bureau of Prisons therefore define ‘elderly’ or ‘older’ variously between 50 and 60 years of age,” he said. “No such scientific information exists for the immigration detention population. In the absence of such science, it is not unreasonable to extrapolate from the next most comparable populations, i.e. jails and prisons.”

In recent days, Mariela, who owns dental clinics in her home country, has called her attorney sobbing about officers showing up in fully protective clothing to remove a sick detainee.

Her attorneys are worried that her stay in custody will last weeks if the government attempts to carry out the deportation. Government officials denied a request to pause her deportation order on Thursday.

“I am listening to a woman who knows what is going on, who runs a business in her home country, who should never have been detained, in freefall panic. Each time she calls, she is more anxious and more panicked,” her attorney, Heidi Cerneka at Las Americas Immigrant Advocacy Center, said. “She said, ‘I don’t want to die here!’”