Cinema historians may one day call this the Covidist period: when films were made in secret during lockdown, scripts were written that did not require actors to come within two metres of each other or they were filmed remotely, with directors sitting a couple of rooms away.

For many film fans, it felt last year as if cinema had simply stopped. In fact, the new crop of films emerging at Europe’s big winter festivals – Rotterdam, Gothenburg and Berlin, all of which were accessible online – show how resourceful people can be in the face of rules, limitations and endless hand-washing. 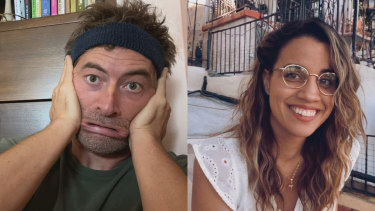 Language Lessons was a success at the Berlin International Film Festival, and despite playing out like a Zoom conversation, never felt flat. Credit:Jeremy Mackie

Take Language Lessons, written by Mark Duplass and Natalie Morales, which traces the growing friendship between a widowed gay man and his Costa Rican Spanish teacher over Zoom. To the extent that an online festival can have hits, this was a slam dunk for The Berlin International Film Festival, or Berlinale, as it’s often called.

Shot in Duplass’ house over five days for virtually nothing, Language Lessons’ story of trust being hesitantly extended, then withdrawn, then extended again was a perfect match with Zoom’s uncomfortable tension between distance and intimacy. And despite being essentially a dialogue between two small laptop screens, it never felt flat or enclosed. This is our normal now, after all.

Or consider Petite Maman, directed by Celine Sciamma, whose last film Portrait of a Lady on Fire was the closest thing arthouse cinema had to a blockbuster in 2019. Sciamma began writing this story of childhood grief before lockdown, but was able to go ahead and make it because it was “very
COVID compatible”, as she said in an online interview.

The 8-year-old girls at Petite Maman’s centre are twins, so were already in a bubble. The movie is set largely in a wood, so it could be filmed outdoors. And the story itself – about a child mourning the loss of her grandmother while dealing with her mother’s enduring depression – was poignantly of the moment. 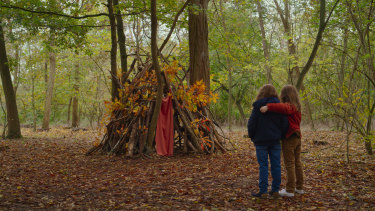 Turns out, Petite Maman was the perfect film to shoot during a pandemic. Credit:Lilies Films

The Gothenberg and Rotterdam festivals were in January; the Berlinale, which was held entirely on camera with public screenings of the films delayed until July, finished on Friday. Freed from the need to bring stars to the red carpet, Berlinale director Carlo Chatrian was at liberty to pick the most stimulating program in years. 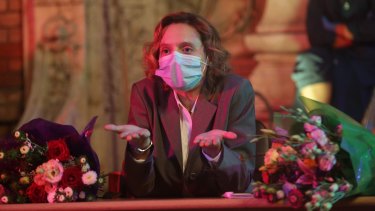 Jude segues from the tape itself to scenes of the stressed teacher negotiating the streets of Bucharest, where people seem to be permanently simmering with rage – passers-by even insult the camera – before slotting in a series of odd facts and observations about Romanian history.

Just as suddenly, the film returns to the ostensible narrative, where Emi faces down her students’ parents. An absurdist showcase for hypocrisy and petty vengeance, this kangaroo court is made both more sinister and more ridiculous by the fact that everyone is wearing a mask and sitting two metres apart. Jude says jovially that the masks improve everyone’s performances. They certainly don’t diminish them.

Masks would be a Covidist step too far for most directors, but anger is certainly everywhere; there is an epidemic of it, one could say, often funnelled into overhauling recent history. In Gothenburg, the top Dragon award went to Bosnian filmmaker Jasmila Zbanic’s Quo Vadis, Aida?, a furious evisceration of the United Nations’ failure to prevent the 1995 massacre at Srebrenica. Gripping and gut-wrenching, the film is shortlisted for the Foreign Language Oscar. 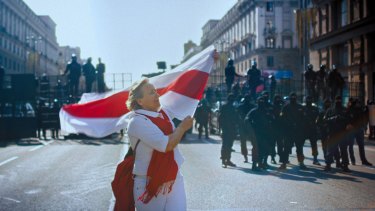 Anger is everywhere, including in Aliaksei Paluyan’s documentary Courage, about the resistance in Belarus.Credit:Living Pictures Production

In Berlin, there were films about the Hungarian army’s collusion with the occupying Nazis (Denes Nagy’s exquisitely made Natural Light), a brilliant documentary on resistance in Belarus (Aliaksei Paluyan’s Courage) and Kevin MacDonald’s The Mauritanian, which opens in Australia later this month. This is a much glossier production, studded with stars (Jodie Foster, Benedict Cumberbatch), but its sustained condemnation of the American project in Guantanamo Bay is no less blistering for that.

Anger is what we want now. Why hold back, after all, when nothing is ever going to be the same again?