Home » Lifestyle » ‘It costs us nothing’: Australian of the Year says change the date

‘It costs us nothing’: Australian of the Year says change the date

Australian of the Year Grace Tame says it is time for a symbolic shift to change the date of Australia Day amid a growing debate about the founding of the country and the treatment of First Australians.

Ms Tame, who was named Australian of the Year on Monday night for speaking out against child sexual abuse, said she wanted to use her role to pursue law reform on abuse as well as to provide a platform on debates including “invasion day” on January 26. 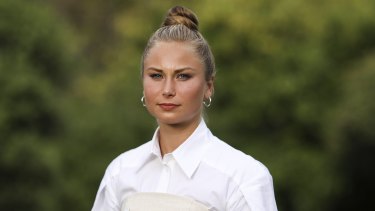 The comments add a significant voice to the argument over the national day as Prime Minister Scott Morrison backs the existing date, Labor leader Anthony Albanese calls for constitutional recognition of First Australians and former prime minister Malcolm Turnbull proposes a shift in the date to help achieve a republic.

“I think that these sorts of symbols are really important,” Ms Tame told The Age and The Sydney Morning Herald on Monday.

“So in the case of Indigenous Australians and First Nations people, this date, invasion day, is a huge symbol.

“And it costs us nothing as a nation to actually change that date. And it would mean a lot to that community and to our national community. I think that’s important.”

Ms Tame, 26, was groomed and raped by her 58-year-old maths teacher at the age of 15 and helped campaign to overturn gag laws that prevented her and other survivors from revealing their experiences and speaking out against perpetrators.

While expressing her personal view on Australia Day, she said she wanted First Nations people to dominate the debate and achieve the change.

Mr Morrison has backed the existing date and said on Monday he was not surprised by a national survey published in The Age and The Sydney Morning Herald showing only 28 per cent of 1222 people were in favour of changing the date.

But Mr Albanese said the date was a “painful day” for First Nations people given the frontier wars after 1788, and he aired a proposal to hold a referendum to recognise First Australians in the constitution and to mark Australia Day on the date of that vote. 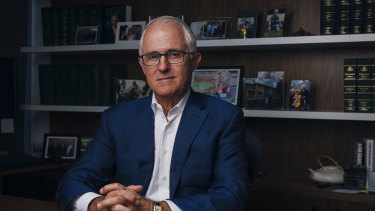 Former prime minister Malcolm Turnbull says Australia Day should change to a future date when the nation votes to become a republic.Credit:James Brickwood

“The next good date would be the date we become a republic.

“Hopefully, that won’t be too long delayed. That would be a good alternative.”

Asked if this would take too long, given the low public support for cutting ties with the monarchy, Mr Turnbull said: “I’d rather see this as being an additional incentive to become a republic.”

The former prime minister, who led the Australian Republican Movement when voters rejected a republic at a referendum in 1999, acknowledged the reform lacked majority support at the moment but said it could be achieved after the rein of Queen Elizabeth.

“When the Queen either dies or abdicates that will be a massive watershed,” he said.

“You will see the monarchy seen in a very different perspective. The glamour of the younger Royals, as celebrities, is real, but it’s also controversial, as we’ve seen with Harry and Megan.

“I mean, the Americans love the Royals, but they’re not proposing to import the British royal family as their head of state.”

Indigenous Australians Minister Ken Wyatt backed January 26 and called for a better understanding of Australian history on the day, including the experience of First Australians.

“We can engage in productive dialogue, with considered understanding for each other’s points of view,” he said on Monday.

“Part of this includes greater recognition that Aboriginal and Torres Strait Islander people’s history, traditions and culture are an important part of all Australia Day events – from citizenship ceremonies to festivities, which is already occurring across the country.”

Labor Northern Territory Senator Malarndirri McCarthy, another prominent Indigenous Australian, said a constitutionally enshrined First Nations’ Voice to the Australian Parliament was imperative to achieving change and was a bigger debate than the national day.

“So on January 26, or Australia Day, or Survival Day or Invasion Day, or just another day, whatever you call it, remember we are a democracy, and we have our individual views,” she said.

“But to survive takes a collective mindset and determination to work together in overcoming our differences.” 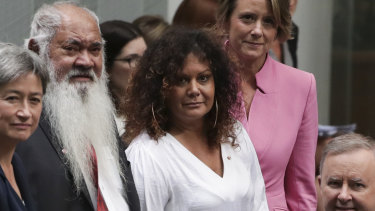 Senator Malarndirri McCarthy says getting a constitutionally-enshrined Voice to Parliament for Indigenous people is more important than a debate about the national day.Credit:Alex Ellinghausen

Former Labor leader Bill Shorten will tell a ceremony in his Melbourne electorate on Tuesday that he had some sympathy with those who were unhappy with the current date.

“But we should also have a day to celebrate the three strands of our national inheritance. It is a debate in search of an alternative date. But I think – and demographics tell us – that a date change at some point is inevitable,” he said.

“Australia is a great society because of what have been described as our three inheritances – our original indigenous culture, the institutions of democracy imported from Europe and our tremendous migrant success story.

“These three strands of our inheritance have all contributed to the resulting character of our people. And it is this character that makes Australia one of the great societies.”